Through it all, hateful author and political commentator Ann Coulter has gone to bat for Donald Trump, egging him on and loving each and every political gaffe as indication that she had finally found the candidate with a heart almost as cold has her own. Trump could have openly called for the execution of all homosexuals or the deportation of all Asians and Coulter would have gladly stood behind him.

But Trump finally said something which Coulter considered unacceptable. Something so hard for her to grasp that she was left sputtering and crying into her pillow the night after:

Trump suggested that he might not deport 11 million undocumented immigrants after all.

Who can blame Coulter for being upset? Trump’s promise to boot a massive number of undocumented immigrants is the cornerstone on which his entire campaign rests. It’s right up there with “build that wall,” and “Hillary for prison.”

I mean, what will he say next? That we don’t need to ban all Muslims? That American is already great? Where will the madness stop?

Coulter went on a Twitter rant as she often does, but this time it was directed at the big orange guy. I wonder how Trump feels to be on the blasting end of Coulter’s hate weapon? 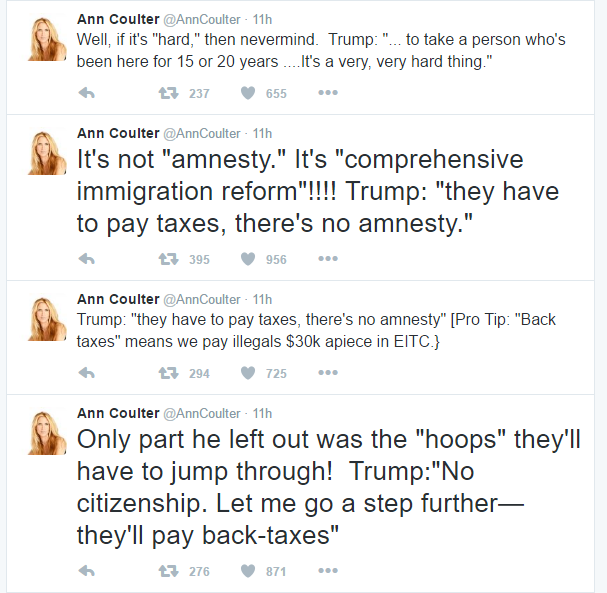