Hawaiian Representative and fervent Bernie-backer Tulsi Gabbard may be up against the most ridiculous race of her life as her GOP opponent openly accused her of being Satan because of her religious beliefs.

Gabbard, who is a Hindu, came under attack by GOP-er Angela Kaaihue who declared in a press release just last week that the Representative “worship[s] the devil,” and referred to the entire Democratic party as the “Devil Democratic State.”

To their credit, other Republicans in Hawaii are not at all interested in engaging in this discriminatory hate speech, and the Republican chair for the state has disavowed Kaaihue and urged others to do the same.

Kaaihue also took her outrageous religious comments to her public Facebook page where she published a disgusting image, pitting Christianity against Hinduism. The image has since been deleted, but this is the internet and nothing is ever truly deleted. 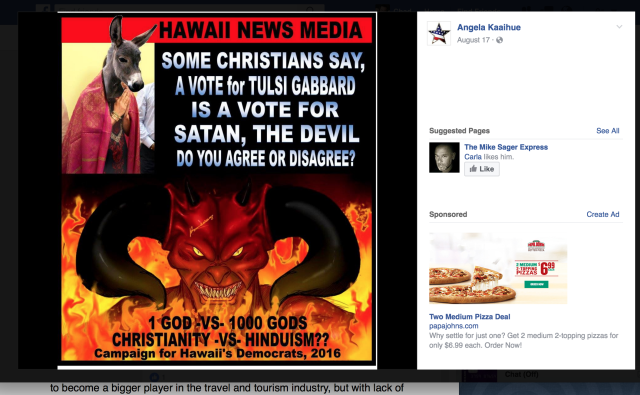 While Bernie Sanders may be done running his race, those who backed him are in the fight of their lives for their own political positions in order to further the revolution. Gabbard is one of these, and it is sad to see her faced against such hate and intolerance, but we feel confident that she will rise above it.