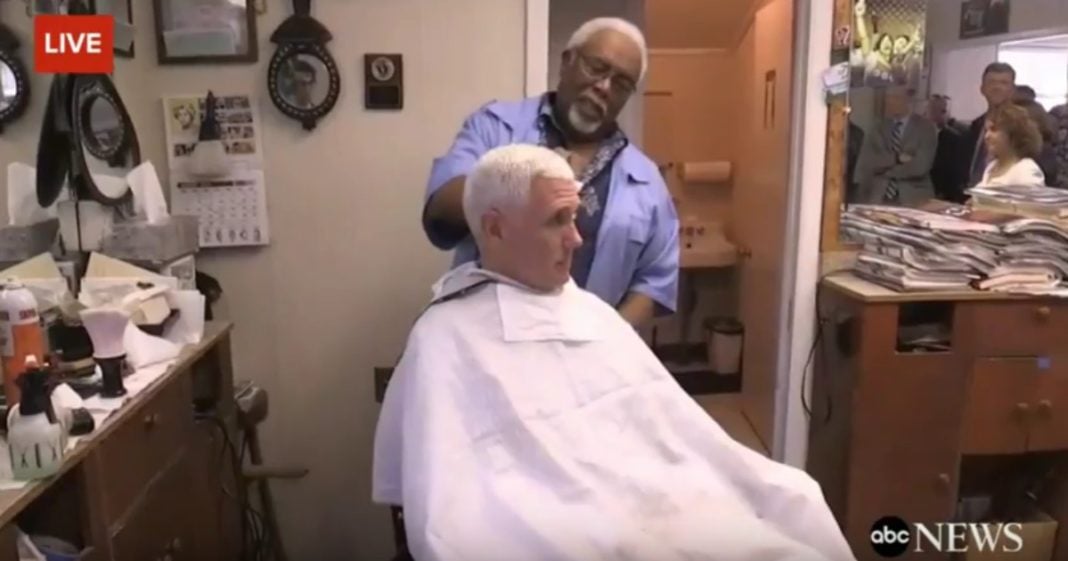 Sure, the entire state of Louisiana is underwater and the foundation of our political process is falling apart day by day, but the corporate media giant CNN found time it its busy schedule to livestream a major breaking news event: Republican vice presidential candidate Mike Pence getting a hair cut.

The effort seemed to be a strange coordination between media and the Trump campaign as snow-haired Pence sat in a barber’s chair while a black barber snipped his hair, a gaggle of staffers looking on. Pence smiled and chatted as the livestream broadcast to CNN’s unlucky online audience.

Why did Pence decide to do this event? Why did CNN consent to broadcasting it? For Pence and the Trump campaign, the motivation was clear: when your presidential candidate only carries one to two percent of the black vote, you might be desperate enough to believe that “slumming it” in a black barber’s shop might win you a couple of votes. You might believe that particularly if you are the sort of racist idiot who only garnered 1 percent of the black vote in the first place.

So why did CNN put up with this charade? Well, we all know the answer to that: It was easy, it was popular, and it helped to stimulate the political narrative. Now we are all a bit dumber for having wasted our time seeing an anti-choice Republican nobody getting a few hairs cut. America.

By the way, the nice old man who cut Pence’s hair didn’t even know who the hell he was until the publicity stunt was over. I wonder if he would have given Pence such clean lines if he had known which racist bigot he was working closely with.