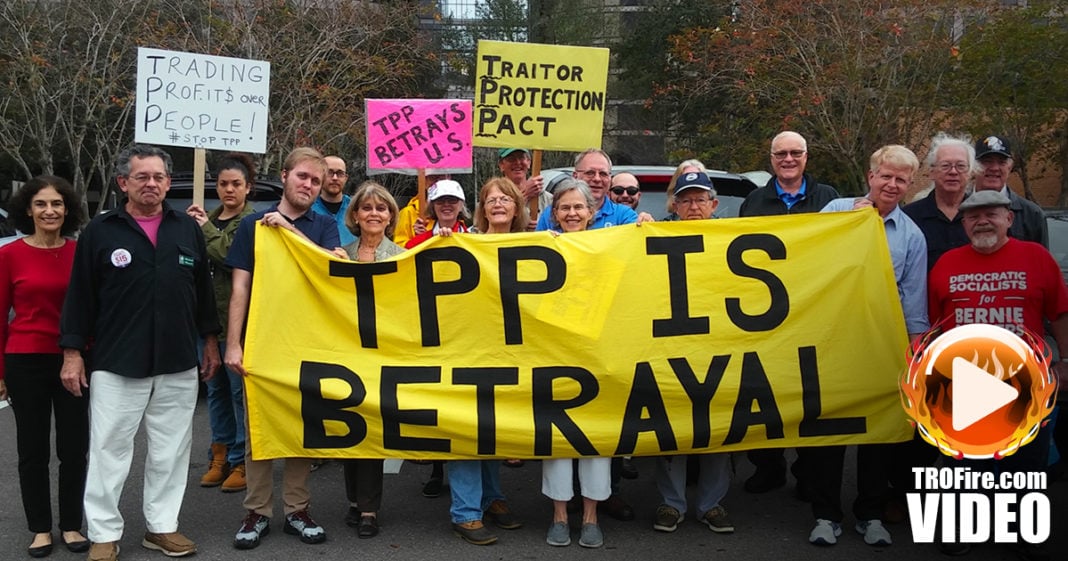 President Obama is off on his TPP sales tour, trying to convince Americans that the corporate trade deal is good for all of us. The only question is why is he so hellbent on passing this disastrous deal before he leaves office? Ring of Fire’s Farron Cousins discusses this.

In a little under five months, President Barack Obama will no longer be the president of the United States, and so that is why, for this last month and for the next five months, he is going to do nothing, other than push the TPP onto the American public. A lot of reports have come out in the last day or two that show that Obama is out there, and he has planned 30 events during this congressional recess through the month of August, where he is going to pitch the TPP to the American people. He’s telling us that his arguments are correct on this. This is his legacy. This is the best thing for the American public.

Unfortunately, it seems that President Obama is the only one who actually believes that, other than corporations because that’s all the TPP is. It is a massive giveaway to corporations that want to rip off consumers, or destroy the environment, or pillage our natural resources. That’s all this deal will do. It’s going to drive down American wages and leave us with no economic mobility whatsoever.

Why is he pushing this so hard? That’s what doesn’t make any sense. He doesn’t have to campaign for another thing for the rest of his life, so he’s not worried about trying to get that money for his next campaign. None of this makes any sense, and that’s what’s so infuriating about it. He knows that his party does not support this deal, at least the voters in his party. There are plenty of corporatist democrats in office who do support it. He knows that a lot of republicans don’t support it. Even Donald Trump has had enough sense to come out and say, “Yeah, this is a bad deal.”

Why is President Barack Obama trying to destroy his own legacy by passing the worst trade deal in American history? Because if he succeeds, and it’s very likely that he will, not only is this going to destroy his reputation and his legacy, but it is going to cost the democrats big time in the November elections, and that is something that we cannot afford this year.