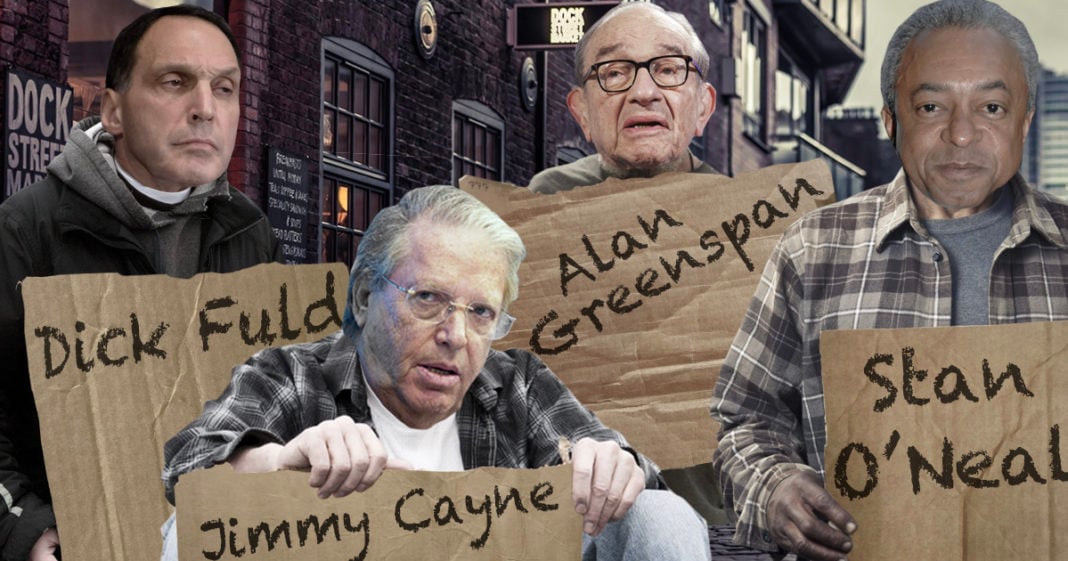 Here we are, eight years after the Great Recession, a nation in consistent recovery from the devastated shambles a handful of power players reduced us to.

So many years after the massive violation perpetrated by the rich and powerful on Wall Street, still no justice has been wrought. Why do their crimes continue to be unpunished?

While we’ve got people murdered on the streets by trigger-happy police for looking suspicious, our Department of Justice fails to carry out the meaning behind its name and bring justice to the biggest criminals in American history.

What would the thugs in the DOJ think if they saw those actors in the ’08 crisis without their Armani suits and Rolex watches? Without their perfectly coiffed hair and their regular facials and well-manicured fingernails? What if those billionaires who profited from the rest of our suffering looked just like the bum on the side of the street? Methinks those who judge at the top might have a more harsh view.

If things continue as they have, we will never see these actors brought to justice. We will never see one dime of retribution for the blood, sweat, and tears which paid for the bailouts. We will never see a bit of justice for the scores of Americans who were fed a lie and then had their life and livelihood ripped out from under them. We will never make it up to the families left homeless because the men in suits at the top needed to keep their banks afloat.

We can seek to prevent these actions in the future by regulating the Fed and calling for more accountability and oversight for Wall Street and Big Banks, but we will never get the satisfaction of seeing bank executives like Dick Fuld, Jimmy Cayne, or Stan O’Neal, or FED officials we trusted like Alan Greenspan brought to justice, stripped of their finery, and judged like the actual criminal human beings they are.

Our Department of Justice has truly failed us, and we cannot forget it.