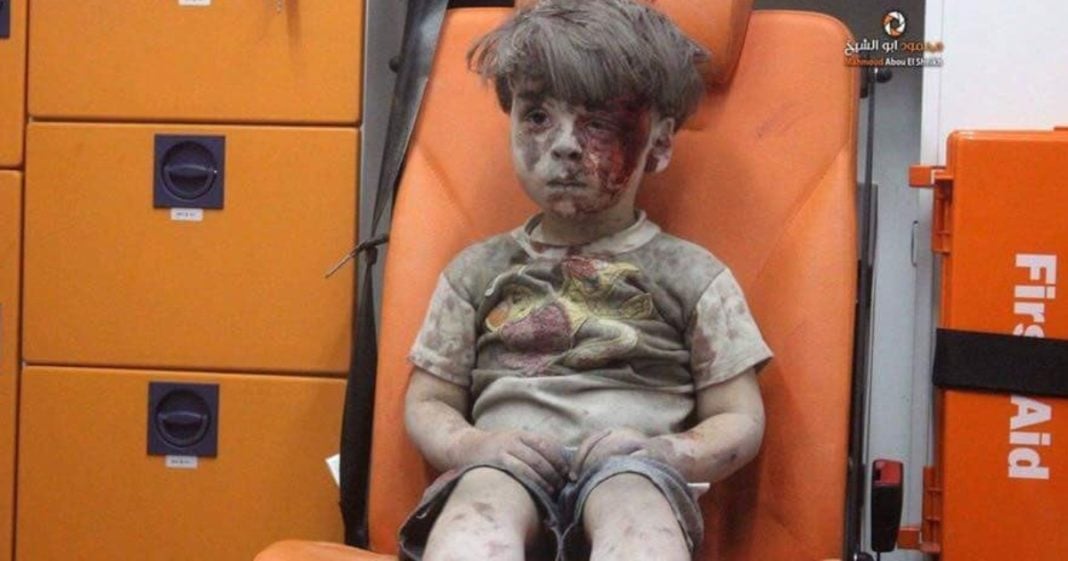 A young Syrian boy sits on an ambulance seat, staring off into the distance in shock and trauma. He is covered in blood and dust from the airstrikes which separated him from his family. At one point he reaches up, touches the blood, looks at it briefly, and then ashamedly rubs his hand on the seat beside him, desperate to rid himself of the bright red symbol of his trauma.

The boy’s name is Omran Daqneesh, and he just survived an airstrike by Assad & Russian forces in the Qaterji neighborhood of Aleppo. Rescuers pulled the young boy from the rubble of a destroyed home. Upon his rescue, the boy does not cry or speak, but merely stares numbly, traumatized in a way most of us will never understand.

Looking at the dazed and betrayed expression on this little boy’s face, a few lines of dialogue emerge for me: that of the rabidly anti-refugee crowd who have painted an elaborate image of the insurgent Syrian, intent on invading the U.S. and other Western nations to wreak havoc.

People like recent GOP candidates who said that they would turn away any and all refugees from Syria, or any refugee who identifies as a Muslim, because of western fear of what those war-torn individuals might do once on free soil.

After seeing this image, and the short video clip which was later released, I can never again think of “refugee” without seeing this boy. This trauma. This fear.

This boy’s story is just one of so many more in Aleppo. Please head over to Telegraph correspondent Raf Sanchez’s Twitter account to learn more about this human tragedy.

Donald Trump: ‘I will look Syrian kids in the face and say go home.’ pic.twitter.com/29S7REy916