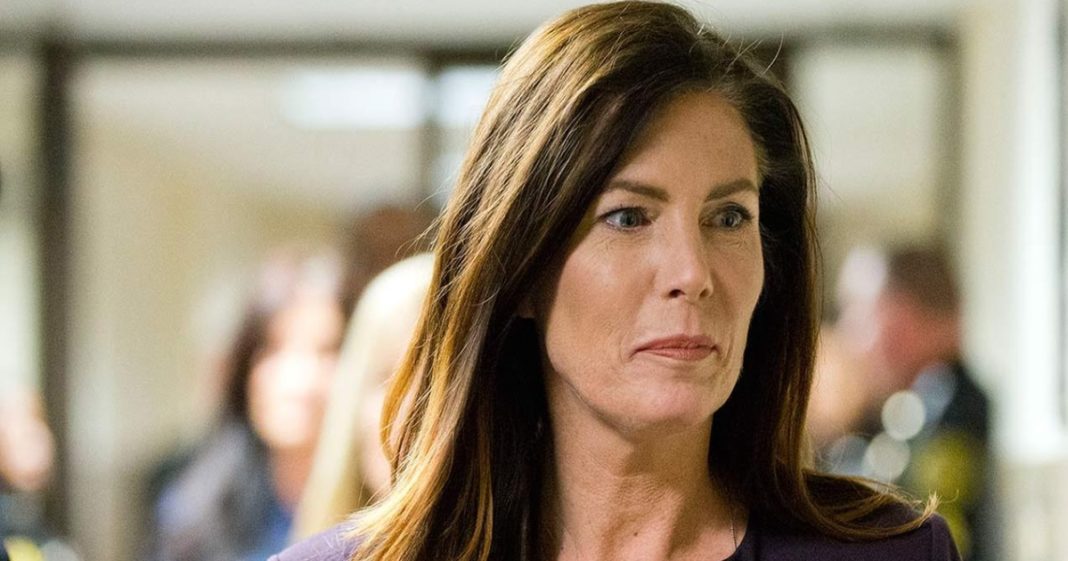 Kathleen Kane, the first woman Democrat to be elected Pennsylvania Attorney General, resigned her office on Tuesday after a grand jury found her guilty on charges of perjury and obstruction of justice. Her term of office will be completed by her chief deputy, Bruce Castor Jr.. Although her defense attorney plans to appeal the verdict, it is likely that Ms. Kane will not be practicing law or holding elective office anytime soon.

Kane was found guilty on nine counts that include perjury, abuse of office and obstruction of justice. She could face a nine month prison term, or probation.

In 2012, Kathleen Kane was an up-and-comer who became the beneficiary of a superPAC started by then-New York City mayor Michael Bloomberg. That superPAC, Independence USA, was funded by Bloomberg’s own personal wealth, helping to finance seven Congressional and state-level races across the county. Kane was one of four candidates who won their campaigns.

After earning her law degree in 1993, Kane embarked on a promising career as a litigator with a Philadelphia law firm. In 1995, she was hired as an assistant to the Lackawanna County District Attorney. During her tenure as Assistant DA, Kane served as prosecutor in hundreds of criminal cases ranging from fraud and sexual abuse to rape and murder. In 2007, she took time off for motherhood, but soon went to work for Hillary Clinton’s 2008 Presidential campaign. She and husband Christopher Kane were staunch Democrats, donating $30,000 to various Democratic candidates over the years.

Her experience in the DA’s office – as well as an endorsement from former President Bill Clinton – were large factors in her successful bid for the office of Pennsylvania’s top prosecutor in 2012.

Kane’s fall from grace began in 2014, when she appointed a colleague, former federal prosecutor H. Geoffrey Moulton Jr., to investigate Pennsylvania governor Tom Corbett and his handling of the child sex abuse scandal at Pennsylvania State University in 2009. At that time, Corbett was the Keystone State’s Attorney General. Kane had reason to believe that Corbett’s investigation of the scandal was subject to undue political influence, as he was running for governor at the time. Kane alleged that Corbett’s gubernatorial campaign interfered with his investigation, that he purposely stalled the investigation so as not to ruffle the feathers of Penn State supporters, and that he may have been influenced by campaign donations from people involved with The Second Mile Foundation, the charity founded by accused child abuser Jerry Sandusky.

The 16-month-long investigation revealed nothing to support Kane’s allegations. Her conclusion: Corbett had not been subject to political influence, but the investigation of Sandusky had been sloppy. In a press release following the conclusion of the investigation, Corbett responded to the AG’s report:

“This investigation was conducted appropriately and timely. Because of the complexity of the case and for the sake of the victims, the investigators were careful to explore all evidence to the fullest extent… this investigation was never about politics. It was always about the people victimized by this man. I am proud of the hard work of men and women who joined in the effort to support and fight for these victims…it was difficult to see their motives and professionalism called in to question.”

One of the assistant prosecutors who assisted Corbett with that investigation was Frank Fina. According to a story recently published in Philadelphia Magazine, Kane had a particular grudge against Fina. To Kane, Fina represented everything she thought was wrong with the AG’s office: primarily, that it had for too long been a “boys’ club,” a place where women were routinely subject to sexual harassment and forced to listen to misogynistic wisecracks. Fina had a reputation for being a no-holds-barred prosecutor; he had helped take down a couple of prominent, corrupt politicians as well as getting Sandusky imprisoned for the rest of his life, making a number of political enemies along the way (something of which he was proud). However, he was also known to use profanity in the office as well as for threatening and humiliating those who worked under him.

Even after the investigation of her predecessor was completed, Kane still kept after Fina.  The feud between Kane and Fina (a detailed account of which can be read here) escalated when the Philadelphia Inquirer printed a story reporting that Kane had shut down an investigation into corruption among state legislators. The lead prosecutor in that investigation was Frank Fina.

The story roused Kane’s ire; in an email message to her media strategist, she said, “I will not allow them to discredit me or our office…this is war.”

That war culminated in allegations that Kane had deliberately leaked two confidential memos to the press simply in order to cause problems for Corbett’s office – and Fina in particular.  This led to the charges on which she was recently convicted after a trial that has lasted for more than a year.

Despite the verdict, Kathleen Kane maintains her innocence. She says that “only a portion of the story has been told,” portraying herself as the target of retribution over her investigation of Tom Corbett. She said that investigation was sparked by the discovery of a stash of “pornographic, racial and religiously offensive emails”  originating in the AG’s office under Corbett’s tenure. Her defense attorney had called to have the emails turned into evidence. However, Judge William Carpenter denied the request, citing the state’s grand jury secrecy laws. It was a ruling that Kane describes as being based on a “tortured interpretation” of the applicable statutes.

In a statement to the media, she said that “some [persons] involved in this filthy email chain have tried desperately to ensure that these emails and, more importantly their attachment to it, never saw the light of day.”

Some of these emails have managed to find their way into that light, however. So far, they have resulted in the resignation of two Pennsylvania State Supreme Court justices as well as a number of other officials. It is possible that, despite Kane’s conviction, more heads could roll in coming weeks. State Democratic Party chairman Marcel Groen isn’t so sure, however. Pointing out the difference between poor taste and criminal acts, he said, “I think the emails are inappropriate, and they’re wrong, but I don’t think they’re illegal.”

In the meantime, Kathleen Kane, who until recently had a brilliant career and future, has tendered her resignation.

It is shocking, even disheartening when those charged with upholding the law are themselves accused and convicted of breaking it. Kathleen Kane is not the only top law enforcement officer who has ever faced felony charges; a similar case involves a Texas Republican, State Attorney Ken Paxton, who has been charged with securities fraud and acting as a financial adviser without being registered. As in Pennsylvania, the Lone Star State’s AG is elected by the people. That makes them politicians as well as officers of the court. Jeffery Toobin, a legal analyst for CNN, points out that,

“Attorneys general are politicians, and they run into the same problem that other politicians do… these are common cases of white collar crime – abuse of power and fraud – and it just so happens that these two defendants are attorneys general.”