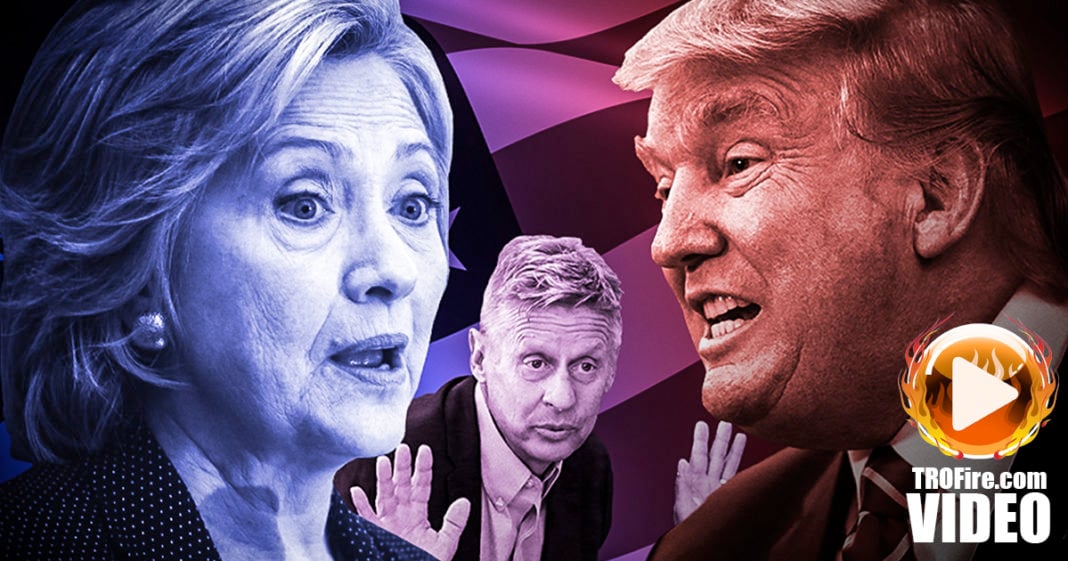 The corporate-controlled media gets to decide which Presidential candidates get to have a spot on the stage at the Presidential debates, but this means that we’ll once again be treated to a lackluster, two-person charade that creates the illusion of choice. Ring of Fire’s Farron Cousins discusses this.

So we’re just a couple weeks away from the very first Presidential debates of this election season, and right now it looks like it’s just going to be Hillary Clinton and Donald Trump up on that debate stage. Now, Libertarian candidate, Gary Johnson might get enough support to make it at least onto that first debate stage, but even with just three people up there, that’s not good enough. Because Gary Johnson is basically just a Republican substitute for Donald Trump, which leaves progressives and Democrats who aren’t a fan of Hillary, nowhere to go.

But it goes further than that. This is not about who you support and who you want to see win the White House. This is about transparency, and it’s about fairness. We have more than just two people running for President. We have more than three, there are more than four. It shouldn’t necessarily matter how high that person’s poll numbers are. If they’re polling at 3%, meaning several million people in this country want that person to win, put them on that stage.

This is not a function of the Republican party or the Democratic party, this is a function, these debates, of the corporate controlled media. They set the standards for which person gets to step foot on that debate stage. Which person gets to layout their plan for this country in front of all of America. Anyone not on that stage who is running for President, is at a severe disadvantage, almost to the point where they have absolutely no chance of gaining any more support than they already have. This is what the corporate media wants.

They do not want us to have choice. They want to give us the illusion of choice. That’s what we have in democracy. It doesn’t matter which candidate or which party you support, you should be in favor of having everyone on that debate stage, so the entire country can know that there are more than just one or two option. There are a lot of good ideas from other parties. There are a lot of bad ideas from other parties. But that doesn’t mean that Americans do not have the right to get to know each and every one of these candidates. The corporate media needs to step up and let Americans know, every election, there’s always a choice.