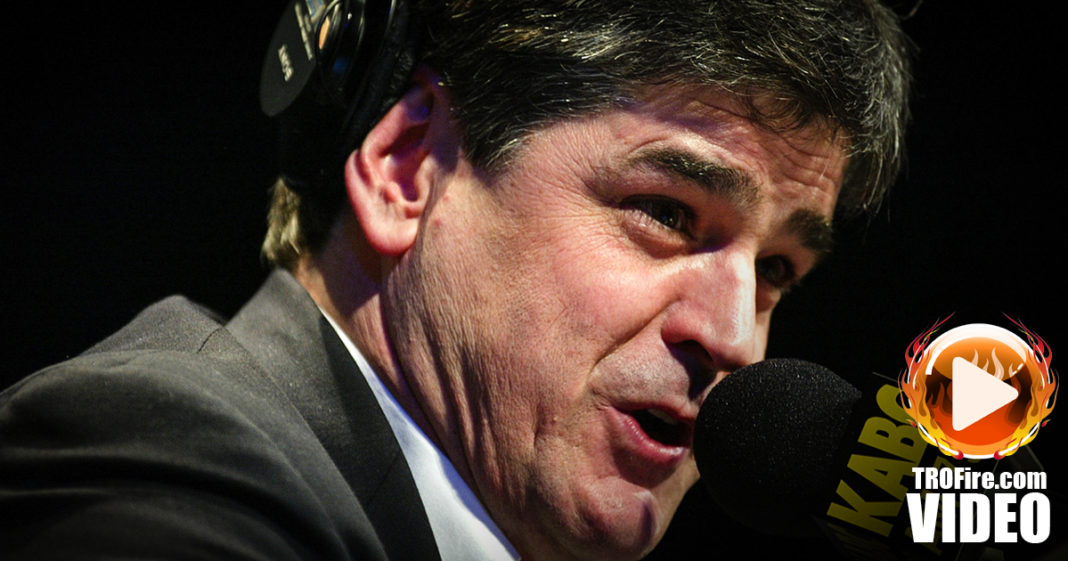 Sean Hannity, the king of hate talk, is fed up with CNN being the pro-Hillary network (even though they aren’t) and he told the minions on Fox & Friends exactly how he feels about both CNN and Clinton. Ring of Fire’s Farron Cousins discusses this.

Farron: Man, Sean Hannity is absolutely pissed off right now about the coverage that the corporate media is providing of the 2016 presidential campaign. Take a look.

Sean Hannity: Donald Trump, Mike Penn said to me the other night, that they’re playing two on one. The media is so in the tank, so onboard for Hillary, they’re so abusively biased. I literally watched this show on CNN over the weekend, and you’ve got this little pipsqueak named Brian Stelter, and he allowed this arrogant professor from the Kennedy School of Journalism, to talk about Trump being a demigogue, and demigogues like Trump become dictators. That’s the type of coverage that CNN offers in this presidential race as they literally kiss Hillary Clinton’s ass and Obama’s ass everyday.

Farron: Yeah. How dare CNN get out there and say that Donald Trump is dangerous. That’s not fair. That’s clearly a pro-Clinton bias. I mean, it’s like a network just popped up with the sole purpose of supporting one political party, and that wouldn’t be fair. Would it? Folks at Fox News, right? I mean, that’s not ethical. That’s not journalism. That’s not news, but that’s exactly what you people do every single day, and you have a for a couple decades now.

Fox News has absolutely no right and no credibility to claim that any other news organization is biased in favor or against another political candidate. Fox News is the Republican network, and right now they’re a bunch of whiny little cry babies like Sean Hannity and the folks at Fox and friends, because they helped to create Donald Trump. Sean Hannity and Fox and friends people still support Donald Trump. They let him come on their shows whenever he wants. He can spew whatever kind of hatred he has in his heart, and in his brain, and they don’t care.

It’s actually good that CNN decided to say, “Hey, you know what? Donald Trump, pretty scary guy.” That’s not a pro-Hillary statement. Saying, “I endorse Hillary Clinton.”, is a pro-Hillary statement, and Fox News doesn’t seem to understand that the two are not mutually exclusive. You can hate Donald Trump and not support Hillary Clinton. Regardless, Fox News had gone off the deep end because the candidate that they created has turned into an absolute disaster. The only people in this country dumb enough to support Donald Trump are the same people who are dumb enough to turn on their TVs every night and look for Sean Hannity’s TV show.