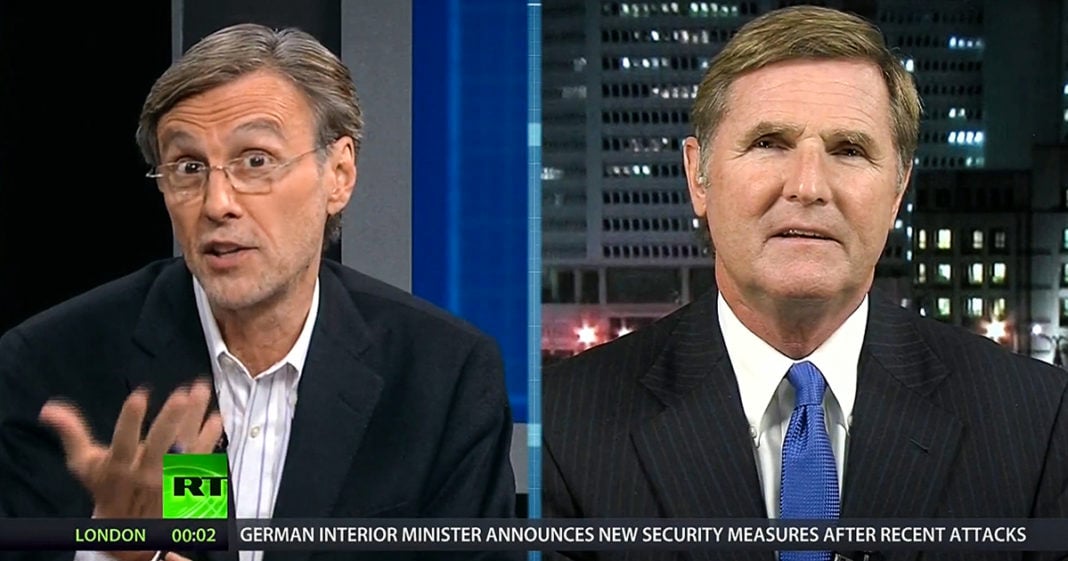 The Koch Brothers were supposed to dominate the 2016 elections – but Donald Trump has changed all that. Or has he? Thom Hartmann discusses this with attorney and author Mike Papantonio.

Thom: You need to know this. This was supposed to be the year of the Koch brothers. After they pledged to spend almost $1 billion in the 2016 elections, Charles and David Koch were poised to be America’s next king-makers, as if they already weren’t close to being that. The $900 million sum was actually double the amount that the Republican National Committee spent during the entire 2016 presidential election. It seemed impossible that anything would stand in the way of the Kochs and their massive political network of billionaire donors and right wing oligarchs.

Then Donald Trump came along. Pet project Scott Walker dropped out of the presidential race, and almost all those promises and almost $1 billion worth of spending came to nothing, or did they? Although Charles and David Koch have said that they won’t spend any money whatsoever to help elect Donald Trump, they’re not just sitting back and doing nothing. They’ve been as active as ever and are working as hard as possible to make the Republican Party just another branch of their business empire.

Joining me now is Mike Papantonio, America’s lawyer and host of the Ring of Fire Radio program, author of the forthcoming novel, Law and Disorder. Pap, welcome back.

Mike: Thom, how are you?

Thom: Just great. Great to have you with us again. With all the focus on Donald Trump, a lot of people have forgotten about the Kochs, and also now that Koch Industries has started advertising on cable TV, the name of the Kochs has pretty much vanished from all the news shows, but the Koch brothers are really as active as ever, aren’t they?

Mike: It’s actually pretty spooky. After they pledged to spend almost $1 billion on this year’s elections, the Koch brothers went silent. They weren’t throwing money behind Republican presidential candidates. They weren’t funneling money to the House or the Senate races. What were they doing? That’s what everybody’s wondered. It really is very creepy. The first answer is that they’re focusing on races that Americans don’t pay any attention to, and that includes judicial races at local and state levels. For God’s sakes, they’re even focusing on things like school board races and races that affect politics all over the country state by state.

Americans never give a second thought, Thom, to who’s running for a bench seat, a judicial bench seat. They almost never pique their interest to lift the curtain and see who’s funding that judge. The Kochs and their organizations are pouring big money into those types of races so they can have a friend on the bench who will always be there, favor their corporation and any large corporation, but it even goes beyond that.

Thom: Pap, before we go any farther on that, if these things are tied together, can you explain … I think in the legal profession, you call it venue shopping … what that is and how it works and why the Kochs picking or helping promote judges around the country is relevant to that issue?

Mike: Yeah. What it’s called is political nullification, or black-robe nullification. For example, if the federal government comes out with something like Obamacare, what ends up happening is a federal judge here, a federal judge in various places, conservative appointments, judges that have worked their way up through … Most of the time, by the way, these judges are political hacks. If you see them coming from the conservative side, almost always you’ll find out that they were there because they worked their way up through some firm that represents major corporations all over the country.

What ends up happening is you see the right wing actually send out what we call test cases. They’ll want to change the law, so what they do is they focus on a particular judge that they know is going to rule with them, whether it’s abortion, whether it’s same-sex marriage, whatever it is. They put the issue in front of this particular judge, this particular forum, this particular jurisdiction, and then they try to create a conflict that’s going to move up to the Supreme Court. They’ve tried that in the past because they know they always win at the Supreme Court. That’s what forum shopping is. It’s most of the time you see defendants looking for these very favorable judges so they can test an issue, and that’s what we’re going to see a lot of if the Kochs get their way here.

Thom: Ah, not good news. Could the Kochs’ focus on state and local elections actually be more effective for their purposes in the long run than hand-picking the president?

Mike: Thom, if you think about it, 3 years ago you and I were talking about this. The lack of money is getting so … In the federal system, it’s getting so bad that Paul Ryan, who attended the Koch brothers’ meeting last week in Colorado, had to beg the Kochs to start spending money on Republican House races, because as Ryan told them, Donald Trump could cost the GOP both the House and the Senate. The Kochs understand they can change politics state by state. They understand if you gain control of politics state by state, the federal judges that are appointed generally are driven by the state movers and shakers.

The state court judges that are appointed are always appointed by that Republican governor who wants to have his way, so the Kochs didn’t flinch when Paul Ryan came begging for money because their strategy, Thom, is what Howard Dean tried to tell the Democrats to do when he said, “You must build a 50-state strategy.” The DNC ignored him completely. They acted like he was just this weird voice in the wind. The people who didn’t ignore him were the Republicans. Republican leadership said, “That’s a great idea,” and that’s why they’ve taken places everywhere from Florida, Alabama, Georgia, Mississippi, across the Gulf Coast almost completely, Texas. They built it state by state.

That’s what Kochs are up to. They’re spending money on school boards. They’re spending money on county commissioners because they understand they can drill if the county commissioner allows them to do that. They can have well-edited books in schools to talk about right-wing propaganda if they can get the school board appointed. They have their fingers in everything. They are spending that $900 million that you talked about, but it’s not going into the big-buck places that we usually see it. They’re small purchases, state politician by state politician.

Thom: That’s astonishing. With all these down-ticket efforts, a lot of them are partisan, even the judgeships, but particularly state representatives and city councils and things like that. The Kochs pretty much exclusively support Republicans, so if the effect of all this, spending this local money by the Kochs, is to increase Republican voter turnout, while those people are in the polls, won’t they simply vote for Trump at the top of the ticket? Couldn’t they actually be helping Trump by increasing this turnout?

Mike: Oh, there’s no question. If you go to Florida and you take a look at really people who usually don’t turn out, those people are Trump people. Look, they’ve been very wise in how they’ve placed their money, Thom. A great example I was seeing today, they put millions of dollars in the state attorney general races. They plan to have these corporate sponsors, AGs fight environmental regulations so the Kochs can pollute to their hearts’ content.

Thom: Is that the thing that’s activated them on the AG front? Pardon my interruption.

Mike: The thing that started it, Thom, was the tobacco litigation. After tobacco, you had the chamber of commerce come in just full bore, saying that we have to gain control of the state AGs all over the country. We end up with this bonehead, Bondi, who is our state AG down here. She’s making decisions that never affect corporations. She’s been told by Rick Scott, “Don’t do anything to harm corporations. Don’t do anything to help consumers.” It’s almost a reflection of what we see in the federal department of justice, don’t do anything to upset the apple cart with corporate America or Wall Street.

It’s nothing new. It’s exactly what they did in 2012 and 2014 elections, and those elections, they cherry-picked the places that they needed to implement their 50-state strategy to fight either for or against projects in small cities all over the country. They funded school board races, as I pointed out, in small towns like Ohio to prevent teachers from forming unions. They installed city council members in South Dakota cities to make sure that they could get approval for fracking projects. They funded Florida state politicians to help fight, if you can imagine, to help fight the solar industry from becoming a major source of energy for Florida residents.

Look, the average person has their eyes on the presidential race. It’s important, granted, because of Supreme Court appointments, but when it comes to what the House does or the Senate does, all of that can be erased by federal judges, whether it’s something that’s a progressive decision, you have conservative judges that can erase any progress made on a progressive issue. Same way with conservatives. If it’s packed with progressive judges, they implement strategy, they implement political ideas, cultural ideas, social ideas with their black robe.

On the conservative side, most of these judges are way under-qualified to be a judge. Most of them have never been in a courtroom in a trial. Most of them come up through the ranks as political hacks, and I appear in front of them every day. I’m seeing these political hacks that have no idea how the system really works on behalf of consumers. They’ve taken over the political process, and that’s what the Kochs understand and they’re doing that state by state.

Thom: Pap, we have a little more than a minute left. Has Trump actually given the Kochs some much-needed cover? With all the focus on him being the circus outrage, it’s a lot easier for them to get away with this without anybody taking about it. Right?

Mike: Thom, it’s not just the Kochs getting away. There are more awful things happening in the United States right now while the brain-dead corporate media is playing the Trump show. Certainly, this situation, they are able to operate under that bit of privacy because nobody’s paying attention to what they’re doing. The media doesn’t understand what we just talked about, Thom.

If you were to line up 5 people in journalism and you were to say, “What’s the most important point that we need to focus on?” they could not even tell you what the Kochs are up to with the state strategy because they’re always following that headline that everybody else follows. It’s almost as if this reporter reports this, therefore, reporter B reports it, reporter C, and they’re missing huge stories that are taking place in this country. Thank goodness you’re covering them. Thank goodness RT is covering them, because these are stories that would never be told, Thom.

Thom: Wow. Thank goodness you’re covering them. Mike Papantonio, thank you for educating all of us as America’s lawyer. Pap, thanks so much for being with us tonight.