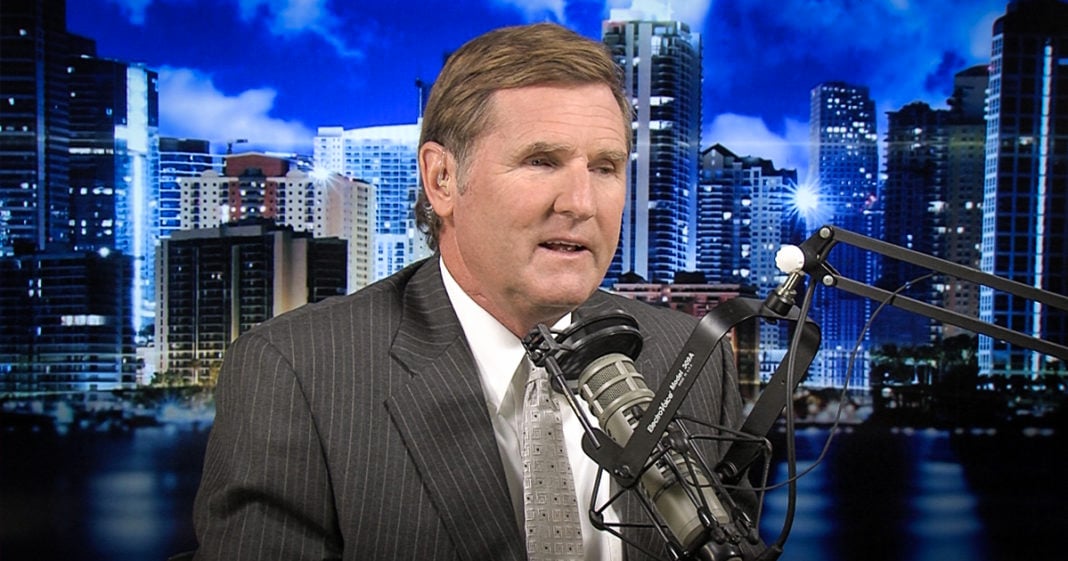 Recently, a string of documents were released that explained how the Obama administration decides how and when to use drone strikes. But these papers do very little to convince us that these drone strikes are being carried out responsibly, considering that 90% of deaths from drones are “not intended targets.” Ring of Fire’s Mike Papantonio and Sam Seder discuss this.

Seder: So Pap, this past week, lost in the news was the release by the White House under pressure from the ACLU of essentially their playbook for killing and capturing terror suspects. Let’s be honest, it’s mostly for killing. This is a big issue. Obviously a lot of this information is stuff that we heard in dribs and drabs in 2013, but this is the first time that we’ve had a chance to see this book tangibly in our hands as to how the U.S. government goes about deciding who they’re going to assassinate.

Papantonio: Well there’s a lot of parts to this story. First of all, the part that you started off with. The very fact that the ACLU could accomplish that getting a court order to declassify this material even though it’s very heavily redacted. You’ve got statements that outline exactly what the review of the agency is. They try to give us some sense of what imminent threat is and when we can use lethal action with a high value target. It’s gobbledygook. You’ve got basically they say, well, it goes through a legal review. Then it goes to the National Security staff. They create a statement for another legal review. Then the next step would be to go to the president. It’s a bureaucracy of a nomination process. At the end of the day, Sam, it’s just subjective. It is let’s take this person out.

Look, I’ve got to tell you something. There’s a great rationale for the idea of drones. The argument that we hear the government make is that death at the hands of ISIL quality terrorists far exceed the death rate of drones killing people, unintended victims. The point is the other parts of this story are interesting to me. One part of it is that now we see Obama surfacing. What he’s doing right now, Sam, is he’s trying to preserve his legacy. If you remember a week or so ago, Obama comes, there’s a press conference, and he’s talking at the press conference about it sounds like it’s all about ISIL. When he lands the press conference, he’s really talking about trying to answer the four hundred million dollar payment that was made to Iran. Why did he do that?

He dresses it up as a discussion about ISIL and the advances we’ve made, but really his sale is I did the right thing with the four hundred million dollars to Iran. This is kind of the same thing. He’s coming out right now and he’s trying to get ahead of this because it is basically he understands that this is his legacy. Like it or not, these are things that people are going to talk about. When you’re living in a world of absolute, horrendous terror from organizations like ISIL, most people can say, I’m okay with this until it’s their family that down the road is taken out by, I guess, classified as an unintended victim. The numbers are startling. I think it’s ninety percent of the targets that they hit, ninety percent are not intended targets.

Seder: It depends, I guess, on who you talk to. As far as the government is concerned, they’re saying that we had very, very few, I guess, tangential casualties. The other issue of course that people make when they’re talking about this is not just that idea that you should care on moral grounds or that you’d care if it was your family. The other issue is that by all accounts in many respects when there is such indiscriminate use, and it’s not totally indiscriminate, but there is such a particularly when you’re talking about signal strikes where you don’t really have a positive ID of who you’re killing, it’s just that they are acting in a way that would suggest they’re a terrorist. That type of thing, what it does is it ends up breeding more terrorists is the argument that experts say. Of course, you know this from dealing with corporations. If someone’s, their job is to nail in, is a hammer, they’re going to see a lot of nails whether or not the nails are there or not.

Papantonio: Well, death by association, that’s a problem. Any rational mind would have to say that the concept of drones is not a bad idea. I think that we have to say. Look, what day goes by nowadays where we’re not seeing something as horrendous as ISIL beheading fifty people or raping children and selling them into, they’re awful stories. I say, great, take them out. Go do it. Use the drone system. The problem is they simply need to maybe reevaluate when and how they use it because this is no different from the FISA Court, Sam. The FISA Court, you know that you could go to the FISA Court and get anything done you wanted to get done.

Papantonio: They appoint certain judges because those judges have a certain ideology. This is the same thing. If it goes to the legal review, it’s the type of legal review that you’re going to have some curmudgeon, right winger who wants to kill them all and ask questions later. Those people, you just put them in the right place in the legal review. Then it goes onto the National Security staff. Well, who do you have doing it? Who’s looking at it? That’s all a big part of this. Then you go and it’s submitted to the president. The president, half the time, I really do believe is not given all the information about the subjectiveness that has gone into the use of this lethal action with a high value target. I’m looking at it, and frankly, I think the drones probably they’re necessary. They’re absolutely necessary, but the way they’re using them, maybe they want to change that.

What we’re seeing now is we’re seeing these reports where the high value targets now are going around with children and women that are part of their entourage. They do that on purpose. They’re bringing in human targets that the idea is to make it less likely that somebody’s going to use a drone to take them out. It’s really complex. You can’t put somebody on the ground and do this. There’s no way. I don’t care how good the soldiers are. I don’t care what their experience is or their technical advancement. You can’t put them on the ground and accomplish some of the things they’ve accomplished with drones. They really, really need to get better than having ninety percent of the people killed that are not intended targets.

Seder: There were two aspects about that drone program. One is it’s not just the bureaucracy that flattens everything out and begins to undercut accountability. It is that the parameters they’ve set up by using words like continuing or imminent threat or whether or not it’s feasible or unfeasible to go and capture this person. You know better than anybody that these are weasel words. They mean different things to different people, and there’s no real standard there.

Papantonio: Well, there’s not. This is made to be wide open. Again, the language of this document doesn’t drive anything. What drives this entire thing is Billy Bob being pointed to the guy, is the guy that’s going to review the National Security staff. A guy like Yoh being appointed to legal review. It’s a stacked deck. If they want to take somebody out, they’re going to take him out. Again, like it or not, we’re living in a world where the drone may have to be something we rely on, but that doesn’t mean we can’t step up how lethal action against these high value targets in an imminent threat situation is actually used. There’s a better way to do it, I think. Again, this is really more about Obama coming out trying to say, “Yeah, I know that ninety percent of the people we hit were not intended targets, but I had to do it.” Matter of fact, people forget that this has been an issue from the Obama administration from day one.

Seder: I would add too what’s also been interesting is that I’ve talked to people who’ve speculated that this program is basically because the Obama administration feels like they can’t capture these people. In that document itself, it says, “In no event will detainees be brought to the detention facilities at Guantanamo Bay” because of course, the Obama administration wants to, has been unable to, or hasn’t had the enough will to, depends on who you talk to about that, to close Guantanamo. They clearly don’t want to expand it. They’re definitely attempting to shut it down. Some people say they’re using assassination because they simply don’t have an ability to deal with prisoners.