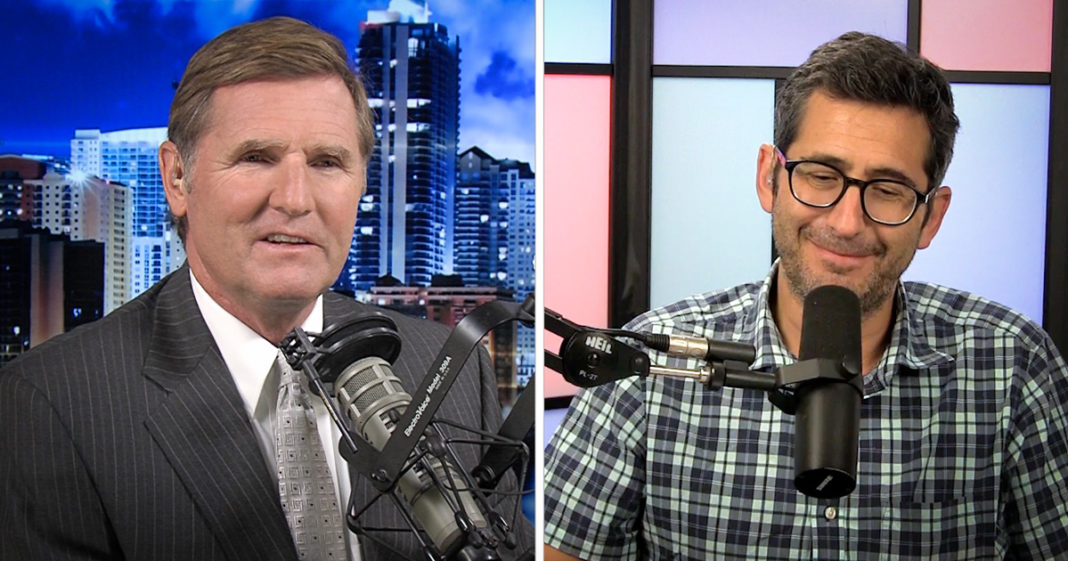 Roger Ailes might be gone from Fox News, but his piggish, perverted legacy will remain with the network for all of time. Ring of Fire’s Mike Papantonio and Sam Seder discuss this.

Seder: The continuing revelations that are coming out, particularly from Gabe Sherman at the New Yorker Magazine, this guy is basically a one-man wrecking crew when it comes to what’s going on at Fox. Roger Ailes, more reports of him sexually harassing and punishing, punishing women in the organization who did not respond to his advances. Not to mention having a secret slush fund for his own security detail that was like basically a police force or a private eye force. Pap, let me just ask you this. Are we going to see massive lawsuits soon on this?

Papantonio: Well, there should be. I just wait for the telephone call. Nothing would make … There’s not enough money for me to tell a client to back down from this if I were the lawyers handling it. He’s trying to use hush money. Look, you got a old, fat, impotent slob that has been running Fox News, and Fox News is a reflection of that old, fat, impotent slob. Now we’re seeing the stories. Andrea Tantaros, it’s hard to tell whether or not they fired her because she was such an idiot or not. She’s an idiot, no question, but she’s coming forward now and saying, “I got fired because Roger Ailes was basically trying to harass me constantly and threatening me if I went forward with the story.”

Every day, there’s a new story. This idea of this Nixonian program that Ailes had in place where if a reporter writes bad about me, I’m going to use slush fund money from Fox News that should be going to the shareholders. I’m going to use slush fund money to follow that reporter around, to find out all the dirt we can, to try to put him in a compromising position with another woman, whatever it may … another man, whatever it is. That’s so Nixonian.

The point is this. This is an ugly, pathetically sick character. The real story is Fox News has been made, has been molded into the form of that sick, pathetic mind. That’s the story to me. It all flowed from the top. Why do you have these wing nuts all over Fox is because you got … Ailes is a wing nut. He is a sick, pathetic, fat, impotent, useless character that stepped into this picture, and really, everybody said, “Oh, he did wonderful. He just did all these wonderful things.” No, he didn’t do anything wonderful. All he did was tap into the hate in America. He put it on TV every day. He was a purveyor of hate every single day. There’s nothing creative about that. There’s nothing novel about that. It’s been around mankind forever.

Now, we have this guy, we have the really ugly underbelly of this pig that is coming out and, unfortunately, you got two sons now that have to make decisions about what do we do with his creation. See, Fox News is a creation of Roger Ailes’ mind, and now we’re finding out how sick that mind really is, what a sociopath the guy was. This is a bigger story than these women. It’s very important. What he did to these women is horrendous, but the story is what did he create? We now have a reflection of his brain called Fox News.

Seder: Pap, let me ask you this, and this may be a little bit off message here, but we got a minute left. If he had this slush fund, surely other people must have known, there are several millions of dollars we can’t account for here. Where’s that money going, (A), and (B), is there a shareholder action to be taken here? There seems to have been sort of … In other words, this guy is not getting away with this without other people at the very least just sort of cutting corners or not reporting what’s going on. There seems to be … It’s hard to imagine he’s just rogue for all these years.

Papantonio: Yeah. He’s not rogue. Everybody’s afraid of him, just like the Nixon Administration. Everybody was afraid to say to Dickie Nixon, “You can’t break into somebody’s house and steal their stuff.” This is the same way with this guy. You can’t victimize women and ask them for sexual favors so they can keep their job, and you’re a pathetic, old crazy guy. Nobody had the willpower to do that, including Murdoch’s own sons. They’ve known this. Murdoch’s own sons have known. When you turn on that channel, Sam … Here’s the point. You turn on that channel, you are seeing Roger Ailes brain. Now we’re finding out day after day how sick that brain was and is and why we have this very sick entity called Fox News.