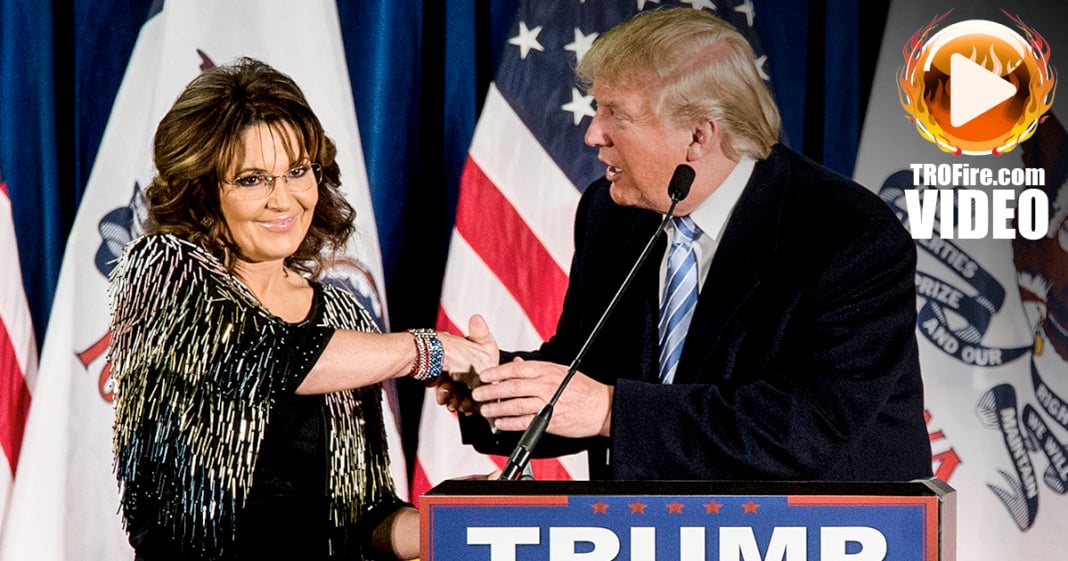 We’re running into the final months of the 2016 election, and Donald Trump and Hillary Clinton are gearing up to go at each other’s throats. And after all of the email scandals, racist tirades, violent protests, heartbreak, and just downright craziness seen from both sides of the aisle, let’s not forget the most cringeworthy part of the entire campaign: That time Sarah Palin took the stage and endorsed Donald Trump. Watch:

Farron: As I’m sure everybody knows by now, Sarah Palin has officially endorsed Donald Trump for president, in of the most bizarre endorsement speeches ever. Here are a few highlights.

Donald: I just want to know a couple of words about a very special person who I’ve respected for so long. An incredible husband, an incredible family. Somebody that when I heard that she was going to endorse I was so honored. You have no idea how honored. Governor Sarah Palin, special, special person. Thank you.

Palin: Are you ready to make America great again? You rock and rollers and holy rollers. You know, like you guys haven’t tried to do that every day since that night in ’08, when I was on stage nominated for VP and I got to say, “Yeah, I’ll go, send me, you bet you. I’ll serve.” Like you all I’m still standing. He has beholden to no one but we the people, how refreshing. He is perfectly positioned to let you make America great again. Are you ready for that Iowa?

No more pussy footing around, our troops deserve the best, you deserve the best. He better than anyone, isn’t he known for being able to command, fire? Are you ready for a Commander in Chief? How about the rest of us? Right winging bitter clinging, proud clingers, of our guns, our God and our religions and our constitution. Tell us that we’re not red enough. Yeah, coming from the establishment, right.

Farron: Holy hell. I don’t know … Nothing that she said in that video really constitutes a sentence in the English language. They were just word … Word vomit is what that was. Random little pieces of words coming out of her mouth in this rapid fire exchange between her and the crowd. Donald Trump’s just sitting there, pow, po-pow. This is the most idiotic campaign that I think I have ever seen in my entire life. Possibly the most idiotic campaign that has taken place in American politics.

The combined IQ on that stage between Palin and Trump wouldn’t even break into the double digits. That’s how dumb these 2 human beings are. For Donald Trump to say that he’s proud, he’s excited of this endorsement, that he’s always respected Sarah Palin, that is insane. Sarah Palin has done absolutely nothing respectable in her life. She quite being governor, so no you do not need to refer to her as Governor Sarah Palin because she resigned when she formally gave up that title.

Second of all, she is the one who helped tank John McCain’s campaign in 2008, but hey as she says, she’s still standing. I guess that’s to show the crowd, “Look, you can be a complete idiotic loser but you can still get out of bed everyday and maybe do something, and maybe occasionally people will care about what you have to say.” To me, that’s the biggest story here, is the fact that her endorsement of Trump is all over the news. Who gives a shit? Who is she? Why does she matter? We’re talking about her because she’s stupid, other places are talking about her as if she matters. This is going to gain Trump 0 additional votes because Sarah Palin is so irrelevant she may as well be endorsing a turtle.