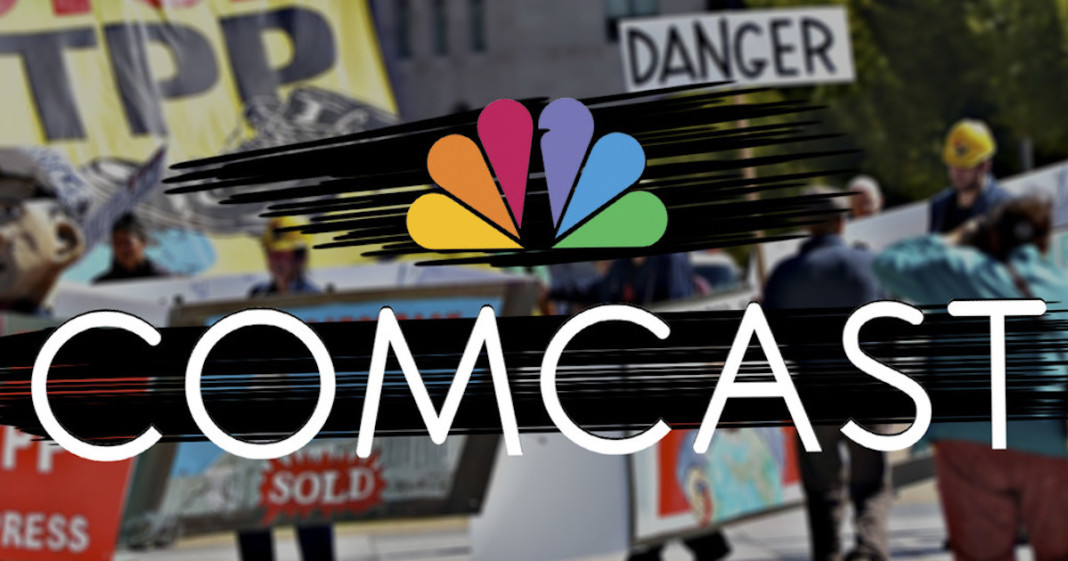 The great state of Washington is doing what many disgruntled consumers have been wanting to do for years – sticking it to media giant Comcast, understandably one of the most hated corporations on the planet. It should come as no surprise to anyone unfortunate enough to be a Comcast subscriber, but it is welcome news.

According to a statement posted on the Washington Attorney General’s website, Comcast has violated Washington’s Consumer Protection Act over 1.8 million times. As a result, the state is lodging a lawsuit against the corporate giant The lawsuit alleges that Comcast’s own corporate documents show an ongoing pattern of lying about its services plans, improperly charging customers for service calls and misusing credit screening of prospective subscribers – all so it could increase its own bottom line to the tune of tens of millions of dollars. This has affected virtually all of Washington’s 1.2 million Comcast subscribers.

State Attorney General Robert Ferguson says, “This case is a classic example of a big corporation deceiving its customers for financial gain. I won’t allow Comcast to continue to put profits above customers — and the law.”

The investigation was sparked by an employee at the Attorney General’s office who is also a Comcast subscriber. That investigation has revealed a veritable laundry list of alleged violations that Comcast has engaged in – none of which would come as any surprise to anyone who has had to deal with this bloated media vampire.

At the top of the list of these alleged violations is the deceitful way in which Comcast presented its so-called “Service Protection Plan.” Subscribers are charged $4.99 a month as insurance in case a Comcast technician winds up having to visit the home and make repairs. To hear Comcast tell it, that monthly plan covers all costs associated with service calls, including inside wiring. Apparently, that was a bald-faced lie; while customer service agents are instructed to tell subscribers that their inside wiring was covered under the Service Protection Plan, the fact is that most interior wiring is not covered. Nor are any problems related to customer-owned equipment, such as modems and connectors. While Comcast claims such restrictions to apply to their Service Protection Plan, good luck in finding them. Customers have had to dig pretty deep in order to find these disclosures – and Comcast hasn’t made it easy.

Filed in Seattle at the King County Superior Court, the lawsuit charges that Comcast deceived at least 500,000 subscribers, collecting $73 million in improper fees over a five year period – all for a “protection plan” that wasn’t worth the paper it was printed on.

Even when it comes to equipment rented from Comcast, customers aren’t necessarily out of the woods. In fact, even subscribers who opt out of the Service Protection Plan are assured that “[Comcast] won’t charge you for a service visit that results from a Comcast equipment or network problem.” That’s pretty clear, but it didn’t stop them from adding those services to monthly bills, even when it was Comcast’s own equipment. In fact, until just over a year ago, Comcast technicians were given a special service call fix code that enabled them to “add service charges to a normally not charged fix code.”

If a subscriber opts to rent equipment from Comcast, the company requires a deposit. However, if the subscriber consents to a credit check and that score is sufficiently high, that deposit can be waived – at least that’s what Comcast’s policy states. Nonetheless, there are 6,000 documented cases in which customers indeed did have decent credit scores, yet were charged the deposit anyway. There are only two explanations: either consumers chose to pay the deposit in order to avoid having a credit check on their record, or – as is more likely – Comcast simply charged them the deposit anyway.

Comcast acknowledges that it was caught with its corporate pants down and has made a few symbolic attempts to correct its “errors” by changing some of its disclosures. That’s not enough for state Attorney General Ferguson however, who accuses the media giant of dragging its heels. His office is seeking refunds of all Service Protection Plan fees – that’s $73 million right there – as well as restitution of $1 million for service calls that employed improper “resolution codes.”

The Attorney General’s office is also demanding that all improper credit checks be removed from the credit reports of all affected subscribers and that Comcast pay as much as $2,000 for every violation of the state’s Consumer Protection Act.

Altogether, Comcast could wind up coughing up $100 million to settle. In addition, they will be required to update and clarify the terms of their Service Protection Plan and stop the improper use of “service codes.” The company will also have to institute new policies for pulling consumer credit reports.

This all comes as a real shock to the nation’s largest broadband internet service and cable provider.

A spokesperson for Comcast issued the following statement:

“Given that we were committed to continue working collaboratively with the Attorney General’s office, we’re surprised and disappointed that they have instead chosen litigation. We stand behind our products and services and will vigorously defend ourselves.”

Comcast, which started out as a small-time cable operator in Tupelo, Mississipi more than half a century ago, has expanded into a bloated global conglomerate with assets of over $166.5 billion. It has its corporate hands in everything from feature film and TV production to amusement parks and home security systems, as well as cable TV and Internet service.

The company is still under control of the Roberts family, who founded it in 1963 when the late Ralph J. Roberts purchased American Cable Systems for half a million dollars (equivalent to about $3.9 million, today). Since 2001, it has been the nation’s largest cable provider.

Comcast has the distinction of holding the title “Worst Company in America,” awarded by The Consumerist in 2014. According to the American Customer Satisfaction Index, Comcast has the worst customer satisfaction rating of any private corporation or public entity in the United States – even the Internal Revenue Service.

Because of its sheer size and power, Comcast operates as a virtual monopoly in many U.S. markets, so it should come as little surprise that the company is rife with abuses and corruption.

Comcast spends millions to maintain its “relationships” with government agencies. In the great tradition of the Tammany political machine of the last Gilded Age, Comcast provides “jobs” to family members of regulators and government officials at all levels in order to maintain its near-monopoly power over local markets. The company has also been guilty of violating net neutrality, allegedly manipulating data speed and imposing illegal “data caps.” Most recently, Comcast has been busy trying to convince the Federal Communications Commission that it should be allowed to charge its subscribers extra for the privilege of keeping their data private.

Although a few lawmakers are concerned that Comcast is in violation of antitrust regulations, Comcast’s army of high-paid lobbyists are busy in Congress, greasing palms and making sure there aren’t too many inquiries into the matter.

Given Comcast’s vast assets and resource, the $100 million in restitution and penalties being sought in the Washington lawsuit is mere pocket change, although Comcast has promised to fight it tooth and nail. However, it is likely that other state attorneys general will follow in Washington’s steps.

Could this be the beginning of the Day of Reckoning for the great Media Monster? We can only hope.