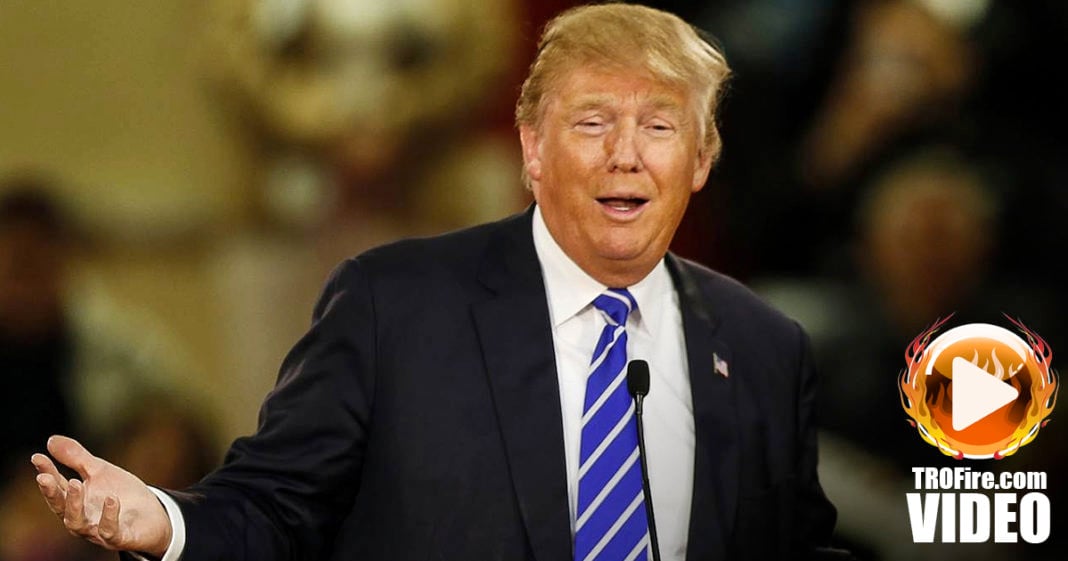 Donald Trump crossed a major line during a press conference yesterday when he suggested that Russian hackers should try to find Hillary Clinton’s lost emails.  In an attempt to undo the damage he inflicted upon himself, Trump told the troglodytes on Fox News that he was just being sarcastic, so calm down. Ring of Fire’s Farron Cousins discusses this.

Donald Trump has been facing some pretty big back lash for his comments yesterday about suggesting possibly Russia should come in and find Hilary Clinton’s missing, deleted emails. Now, what was remarkable about this statement is one, he was being completely serious, and he honestly wants Russia to come in, hack into Hilary Clinton’s email servers or the DNC’s email servers, or anybody’s email servers, and interfere with the US election.

Now, a lot of people have correctly pointed out that this, by definition, is treason. Calling for a foreign government to interfere with the affairs of another government. Treason. Donald Trump, being the slick talker that he is, went on Fox News this morning and told the people over at Fox and friends, “Hey, everybody relax. I was being sarcastic.” This is affluenza at its finest.

Donald Trump has lived a life without consequence. Every horrible thing that he has ever done, he’s managed to profit from it. Every horrible action he ever took or has been alleged to take, against his wives or employees or anything like that, has gone unpunished. Affluenza all the way. Donald Trump does not know punishment, does not know consequences. This comment about Russia interfering with the US election shows that because he can just hop on Fox News and say, “Hey, I was being sarcastic.” Those idiots are like, “Okay, yeah, we believe you. That’s great. Let’s move on to something else. Hilary Clinton’s pretty bad, isn’t she?” That’s what happens every time.

The media is enabling Donald Trump right now, specifically Fox News. However, it should be pointed out that yesterday, MSNBC twice, at least, cut away from the Democratic Convention to show Donald Trump speeches. It’s not just Fox News. MSNBC, CNN, everybody else is playing right into Donald’s hands. This is getting absurd. It’s getting obscene. We have a presidential candidate who wants to make America into an oligarchy, into a fascist regime, and the media’s playing along letting him say whatever the hell he wants to say without consequences. Affluenza is very much alive and well in the United States. Donald Trump is patient zero.