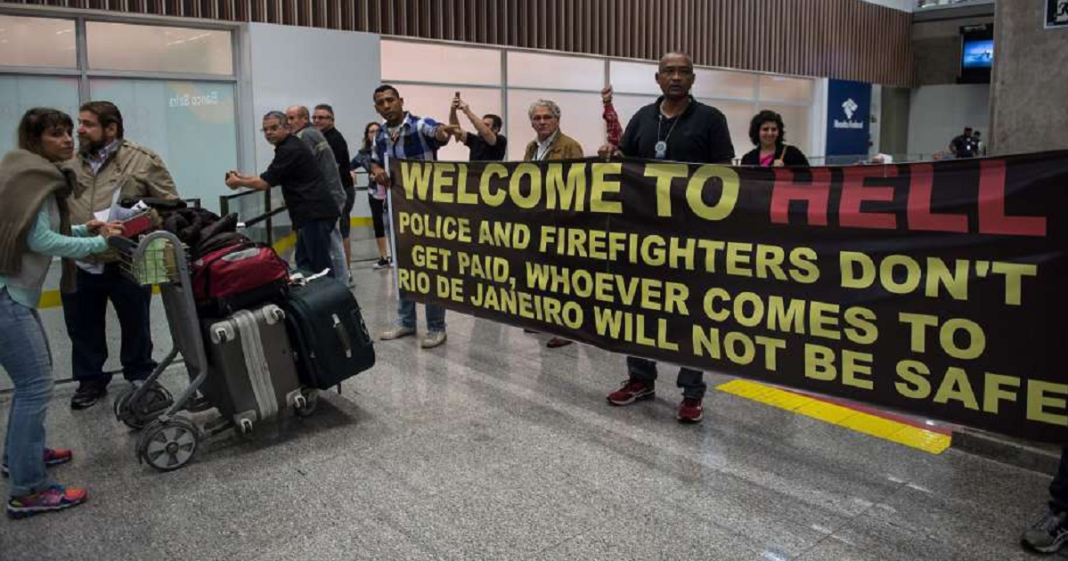 For many, the name “Rio de Janeiro” brings to mind images of sunny beaches filled with beautiful, scantily-clad sunbathers, Carnivale, the famous giant Art Deco statue of Christ the Redeemer atop Corcovado, and the rhythmic music of Brazil’s most famous son, Antonio Carlos Jobim.

But there is a much darker side to South America’s seventh-most populous city that is increasingly coming to light now that the much-anticipated 2016 Summer Olympic Games draw near. Between dangerously polluted waters, widespread violent crime and corruption, a shaky economy and egregious human rights violations — not to mention the deplorable state of the Olympic Village where athletes will be housed — it would be a miracle if the Games even came off.

The entire event has been a disaster from the beginning. Rio de Janeiro was chosen to host the 2016 Summer Olympics over Tokyo, Madrid and Chicago in October 2009. Two weeks later, a gang war erupted between two rival factions, in which a police helicopter was shot out of the sky only a mile from where the opening ceremony was scheduled to take place. That war left twelve people dead, attracting international scrutiny.

Just over a year after construction began on the site where the games would be held, widespread rioting broke out in protests of the vast sums that were being spent in preparation for the games – while human needs such as health care, sanitation and education were being ignored. In April 2014, workers who were building the venue went on strike over dismal pay and working conditions – delaying the project for two weeks.

Members of the International Olympic Committee (IOC) were appalled. The Committee Vice President, John Coates, stated that such delays were “unprecedented…the worst I’ve ever experienced.” He also acknowledged that the high level of pollution in the water around the city was serious.

Sure enough, less than a month later, thousands of dead fish washed up on the shore of Guanabara Bay. Toward the end of 2014, scientists discovered the presence of drug-resistant “super bacteria” in the very waters where some Olympic athletes would be rowing and sailboarding.

2015 brought even more gang-related violence to the city, killing five and injuring more than 30. In February, more dead fish washed up on the shore — right in time for a visit by IOC officials.

Despite the assurances of city officers and the mayor that the water would be cleaned up in time, the situation has not improved. With less than a week to go before the opening ceremony, Olympic athletes face the prospect of competing in water tainted by human fecal matter.

But these problems pale in comparison to the massive human rights abuses that have been taking place in the city over the past seven years.

There is much talk in the U.S. this election cycle about the growing gap between the “1%” and everyone else — but in Brazil, and particularly in Rio de Janeiro, the problem is far worse. Hosting the 2016 Olympic Games — and before that, the Pan American Games in 2007, the U.N Earth Summit in 2012, and the World Cup in 2014 — has only exacerbated the trouble as people in impoverished communities are summarily evicted and tossed on the proverbial trash heap, with nowhere to go. If Rio de Janeiro’s infamous “Shantytowns” aren’t simply demolished and their inhabitants exiled, the city builds walls to hide them from visitors’ view. Public transportation lines serving poor neighborhoods are eliminated and re-routed to discourage travel to the more well-heeled areas of the cities, such as the southern beaches where tourists and the local aristocracy congregate.

Generally, city officials, who take their marching orders from wealthy developers and investors such as Carlos Carvalho (the twelfth richest person in Brazil) through bribes, have become very adept at making Rio de Janeiro look very attractive to visitors.

But when it comes to the needs of the urban poor (most of whom, not coincidentally, have dark skin), they don’t give a tinker’s damn. They just sweep it all under the rug. So far, more than 4100 families have been left homeless, and nearly 2500 more are facing eviction from the homes they have. All this so that the rich and beautiful people of the world can come to Rio and have a grand party next week. In the meantime, these families and their children cannot access health care, cannot attend school, and are left on the streets to fend for themselves.

Not surprisingly, there has been a rise in violence by the police and military who have been charged with quelling any protests. In April, a ten-year-old boy was killed by police officers, sparking protests. The boy was only one of over a dozen child victims who died in gunfire exchanges between local police and the gangsters who are battling over turf, eager to take advantage of the situation.

According to a local non-governmental organization known as Rio de Paz (River of Peace), over half a million Brazilians have been murdered over the past decade. Four-fifths of them — fully 80% — were from impoverished communities. Antonio Costa, founder of Rio de Paz, has been calling on authorities to address the real source of the ongoing violence by investing in social programs, education, and health care.

They have not. Instead, they are increasing the militarization of local police as they continue to toss more of the urban poor out on the streets, covering it all up with shiny new walls for the benefit tourists and their money.

The Olympic Charter states that,

“The goal of Olympism is to place sport at the service of the harmonious development of humankind, with a view to promoting a peaceful society concerned with the preservation of human dignity.”

So far, the City of Rio de Janeiro has been doing a piss-poor job of living up to those ideals. But, try as they might to hide it all from public view, between the polluted water and the substandard housing at the Olympic Village, it’s a pretty good bet that visiting athletes are going to get a taste of what too many of the city’s poor must experience with all the time.