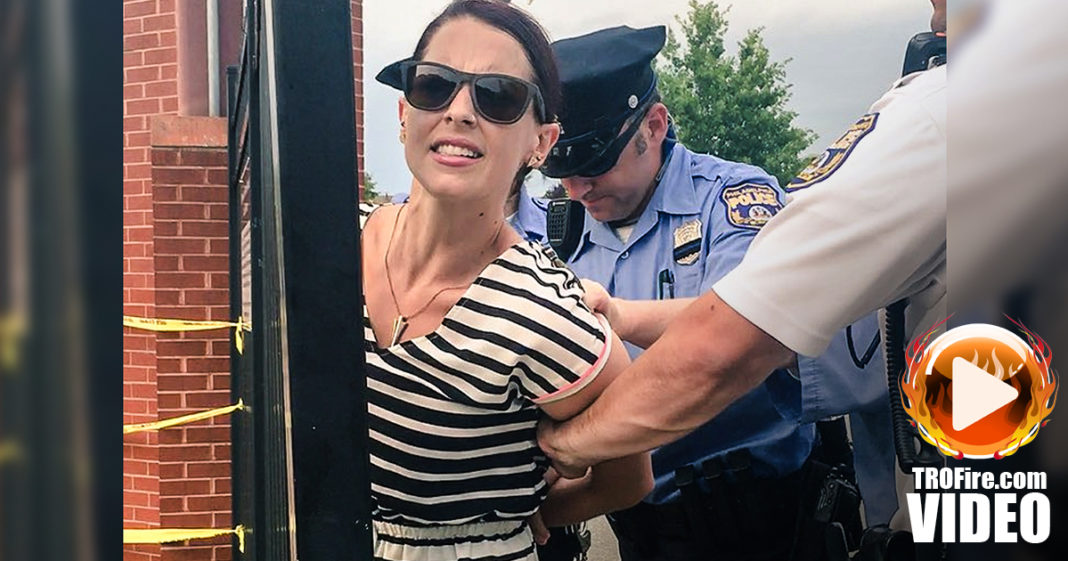 The official line from the police is that “no one has been arrested” at the Democratic National Convention, but that couldn’t be further from the truth.  Protestors and journalists are being rounded up, handcuffed, booked, and cited all over the city of Philadelphia, and Empire Files host Abby Martin was one of the victims. Ring of Fire’s Farron Cousins was lucky enough to speak with her about her experience.

Farron: This week, the Democratic National Convention has kicked off, lots of protests. According to police, no arrests at all at any of these protests, but I’ve got someone on the line here, Abby Martin, the host of The Empire Files on teleSUR TV, and Abby, you’ve got quite a different opinion about the arrests than the police seem to have there in Philadelphia.

Abby:Yeah, Farron, I didn’t realize that this was tactic that’s employed actually frequently by police. It’s mass, sweeping detentions, and they can hold people for hours, sometimes days, and then just drop charges, and then claim no arrests were made. This is what you see happen time and again at protests. Of course, they wanted to maintain that the DNC was all peaceful the first day. There was no arrests. Well, that’s definitely contrary to what I experienced firsthand. We heard that there were dozens of arrests going on at FDR Park, a public park outside of the convention hall, and as we went to go cover these, all the streets were blocked off, the trains were stopped, of course they make it as hard as possible to even get there, even though it’s a public place and that’s the free speech zone where we can protest and cover protests.

We’re on the way there. We saw all these taxis, so we jumped in a taxi, went, followed all the signs to where the taxis were going, directing people to the DNC, got out in this big parking lot, walked past a bunch of cops toward this park, and as I go to the corner I realize that there’s a fence fencing us in from the parking lot, between the park and the parking lot. I asked one of the cops, I said, “Hey, how do we get there?” He was like, “Uh, you guys are supposed to have credentials to be, DNC credentials to be in this parking lot.” We’re like, “Oh, we had no idea. We just got dropped off here by a taxi because there’s signs telling all the taxis to come in, and we just walked by a bunch of cops who didn’t say anything.” We were like, oh, we need to get out of here, and he was like, “Yeah, just walk down to that exit down there.” We’re like, “Okay, great.”

We’re walking down to the exit. Another more belligerent cop runs up and she’s like, “Hey, hey! Where are your credentials? Where are your credentials?” Mind you, we have credentialed press. We just weren’t credential to be inside the convention hall, which was like 100 meters away. We were in this huge parking lot where uberPOOLs were dropping people off. It was tons of people who were in the same situation we were, which was just being dropped off in this big lot, trying to maneuver around these big fences. The woman came up and Mike was trying to explain to her, Mike my partner and producer was trying to explain to her, “Hey, we just got told by another police officer to walk toward this exit.” He’s like, “We’re complying.”

She grabs my dress extremely aggressively, rips it, and I was, of course I reacted, because I was just appalled. I was like, “Whoa whoa whoa, we’re complying with the other officer’s orders, ma’am,” and she pointed to two other officers, and we’re like literally ten feet from the exit at this point. We are trying to remove ourselves from this situation, complying with another officer’s orders, and as we’re about to leave, a couple feet from this exit, two other police officers, she told them, “Arrest her.” They shoved me up against the fence. I was just appalled. I kept saying, “I’m press. I’m a member of the press. I’m credentialed. What are you doing? What are you arresting me for?” She said, “Disorderly conduct,” and the cops, I know that it’s, people go through a lot worse than what I went through, but wow, I’ve never been arrested before, and they put the zip ties on excruciatingly tight, the tightest they could possibly do, manhandled me, they whisked me to this paddywagon, and right before they put me in the paddywagon they basically searched me extremely aggressively and bared my butt to onlookers.

It was the most humiliating, horrible experience, and I got thrown into this freezing cold paddywagon all alone. I had no concept of time or what was happening. I just thought I was spending the night in jail. I had to go to the bathroom. I kept saying, “What is happening? Why are you arresting me?”

Farron: How long did they keep you? Did they take you anywhere from there? Did they eventually-

Abby: No, so I was in this empty paddywagon assuming that other protesters were going to be coming on board or someone was going to tell me what was going on. They completely ignored me. I kept telling them, “I need to go to the bathroom.” I was there for at least two hours. It wasn’t until it was after dark that they said, “All right, we’re bringing you in,” and I just thought, “Great. At least I’m going to actually go to jail now, and use the restroom, and not just be here like a dog.”

They brought me in, and of course they didn’t bring me to jail. Instead, they brought me to this elementary school house where they’re mass processing all the people that they’ve arrested. I get there and I’m like, “What is happening?” They took my mugshot, but they didn’t do any fingerprints, because it wasn’t technically an arrest, so that they could say there was no official arrests. It’s just these citations. They basically dropped down the charges to just a citation, and then it changed. All of a sudden, I wasn’t getting cited for disorderly conduct. I was getting cited for not having credentials in a credentialed area.

Farron: How many other people were in this elementary school, booking facility I guess?

Abby: I was the last one brought in, and they had no, they said, “Who is this girl? What is happening? Why is she coming in so late?” I think that I was just trying to talk to them too much and find out what was going on, and so they just punished me and wanted me to just suffer as much as possible. That’s why the zip ties were so tight. That’s why I was in this freezing cold paddywagon for hours and hours. I do know that at least 28 people, according to the legal team that helped my partner track me down, at least 28 people were arrested in the same way. I heard also up to 60 were processed, but I can’t verify that, but it’s just insane that really, the story here is that there was mass arrests. CNN cut away to cover the Boyz II Men concert as soon as this was happening. It’s just an unbelievable story being covered up as we speak, and this has been happening, and it’s going to happen every day during the DNC.

Farron: It’s remarkable. This is the kind of story that you hear about happening in some kind of third world country where America would then come out and say it’s deplorable how they’re treating these journalists, hauling them off, but here, we’re doing this in the United States, not just in the United States, at the Democratic Convention, the party that’s supposed to be a little bit more tolerant of free speech and an open press. To me, this is insanity, and it’s even more insane that this story is not out there for the public. That’s what’s almost as disgusting as the actual arrest, is that nobody is out there talking about this right now, and it’s something that obviously is happening. We documented the arrest. I had been tweeting with your brother. [inaudible 00:06:34]. Had been tweeting with Mike. We were following this as it happened, and we got a huge response online. Everybody was very concerned about this, and it’s great to hear you’re okay, but it’s also disgusting to hear that this is actually happening.

Abby: Right, and yeah, it is really disgusting. It was an overwhelming amount of support, but the thing is, I was lucky to have been lumped in with the kind of civil disobedient sweeping contingent, because I think if I wasn’t, I would be in jail. I would have at least spent the night. It’s just unbelievable that police have such contempt and disdain not only for just citizens paying their taxes, but journalists, credentialed journalists who are there simply covering the protest, trying to comply with police orders, treated like animals, thrown around, assaulted. My wrist is in a brace.

Abby: I have really tiny wrists that are brittle. I’ve broken them a million times when I was a kid, and they’re in excruciating pain still. It’s just been a really emotionally charged couple of hours. It’s just unbelievable that people can do this and get away with it, and honestly Farron, the whole time I was just thinking, “Thank god I’m who I am. I at least have this swell of support. I’m not black.” I was just thinking of how much worse potentially the situation could have been, and I’m so grateful that I have so many people on my side, because there’s thousands of people who go through this every day who are trapped still in custody with no support and no attention, and that’s who we should be talking about, because really, this is just a small microcosm of what a huge problem with this police state, this dystopian reality that we’re living in.

Farron: We’re glad that you’re out, and worst case scenario, I do know a very good attorney if you need to make a phone call. Thank you, Abby. Keep fighting out there. Please keep us up to date. It’s great to talk with you again, and so please keep fighting. Don’t let them get you down.

Abby: Thanks so much, Farron. Keep up the great work. Talk to you soon.