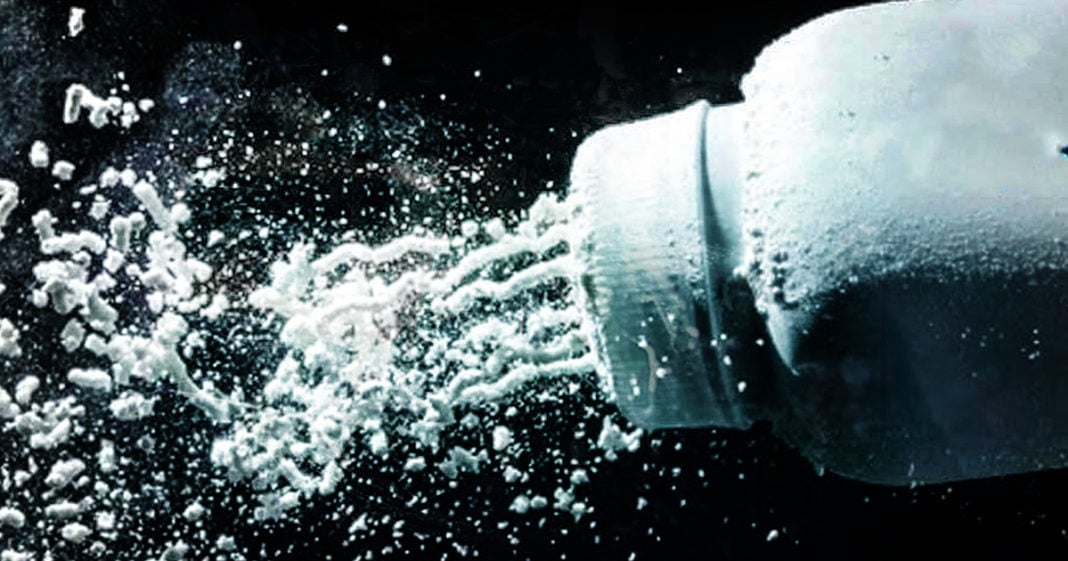 Johnson & Johnson is being hit with lawsuits all over the country over the link between their talcum powder and ovarian cancer.  But what most people don’t know is that several years ago the company offered a woman $1.3 million to keep the link between talc and cancer quiet from the public. Ring of Fire’s Farron Cousins discusses this.

Learn more about the dangers of talcum powder here.

By now, I’m sure everyone has seen headlines talking about Johnson and Johnson losing several trials where they’ve had to pay out tens of millions of dollars because their talcum powder has been linked to cases of ovarian cancer in women. Now, here’s the story that very few people understand about all this.

Now, she declined that money and in the jury trial, she was awarded no money whatsoever, but the jury did find that Johnson and Johnson’s talcum powder was linked to ovarian cancer. Ms. Berg explains it was never about the money. She declined that offer because she wanted this story to make it to the American public, to the world, so that people could understand that this company, Johnson and Johnson, for forty years, they knew about the link between cancer and their talcum powder and they hid it from the American public. They did everything they could to prevent women all over this country from understanding that the powder they were using everyday could kill them. Johnson and Johnson knew that.

You see, talcum talc is a mineral, much like asbestos. Just like asbestos, when it builds up in the body, it creates cancer. Again, Johnson and Johnson knew this for forty years and they did absolutely nothing. They increased their marketing in low income areas, minority areas. They specifically targeted black and Latino women with this product and they have since developed ovarian cancer as a result.

Johnson and Johnson is almost just as bad of a criminal organization as you can find in this country today. I think probably only DuPont and Monsanto topped them in the caliber of criminal conduct that we see coming out of them everyday. That’s what these lawsuits are about. It’s not about people wanting to get rich quick, it’s people wanting to expose the lies of this company.

That’s what most lawsuits are about. It’s not about the money and it never has been, according these victims. They just want people to be aware of what this company has done, so that they can protect themselves because Johnson and Johnson certainly isn’t going to tell the truth, unless they’re forced to.