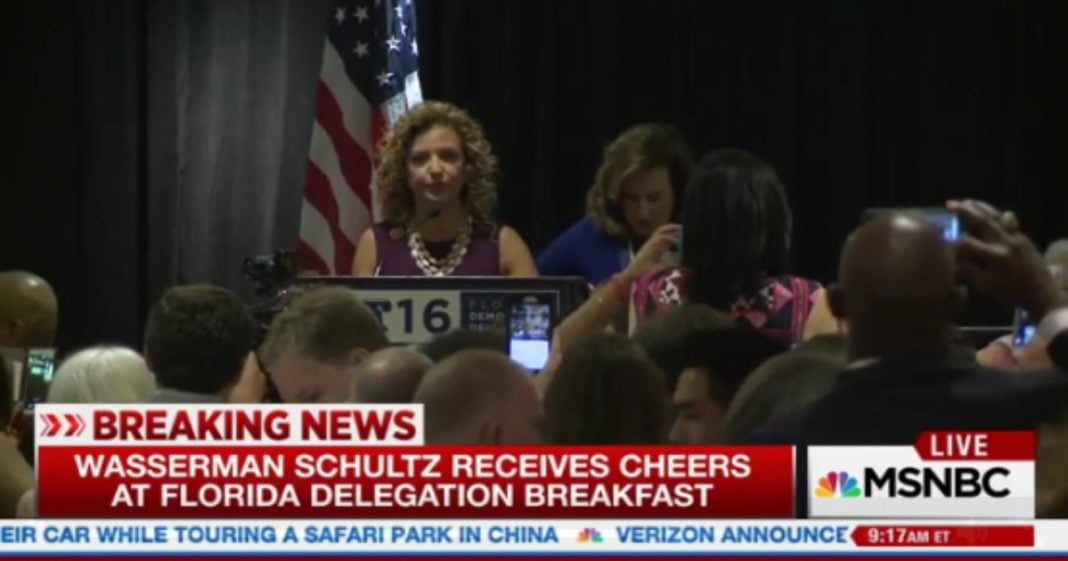 It makes no sense that Debbie Wasserman Schultz would attempt to make a public appearance just hours after she announced her impending resignation from her position as DNC chair, and yet that is exactly what she tried to do during the early hours of the Democratic Convention.

Though Wasserman Schultz was removed as an official speaker of the event and expected to have little to no role in the official going-ons, she was still scheduled to address the Florida delegation on Monday morning – but the delegates were having none of it.

In her usual superior style, Wasserman Schultz tried to shush the protesters who booed and made noise so she couldn’t speak.

“Now settle down,” she said with a straight face, as if talking to a rowdy class of children rather than an electrified electorate, furious at her interference in the Democratic system.

She made it clear to the crowd and the rest of us that she doesn’t intend to go anywhere, despite the clear damage she has done and continues to do to the Democratic party.

“You will see me every day between now and Nov. 8 on the campaign trail and we will lock arms and we will not stand down.”

She continued to address the crowd, telling them that those making noise are not the Florida she knows.

It seems, Ms. Wasserman Schultz, that the Florida you claim to know is one of corruption and greed, and that maybe, just maybe, the rest of Florida is sick and tired of your sh*t.

The Florida you know and the progressive movement you know are ready to move on without you. It’s time to hide your curly head in shame and make a quick exodus from the party you in-part destroyed.

Man this is brutal: DWS being booed this morning at the Florida Delegation Breakfast ahead of the DNC: https://t.co/nhdCpyMrZO