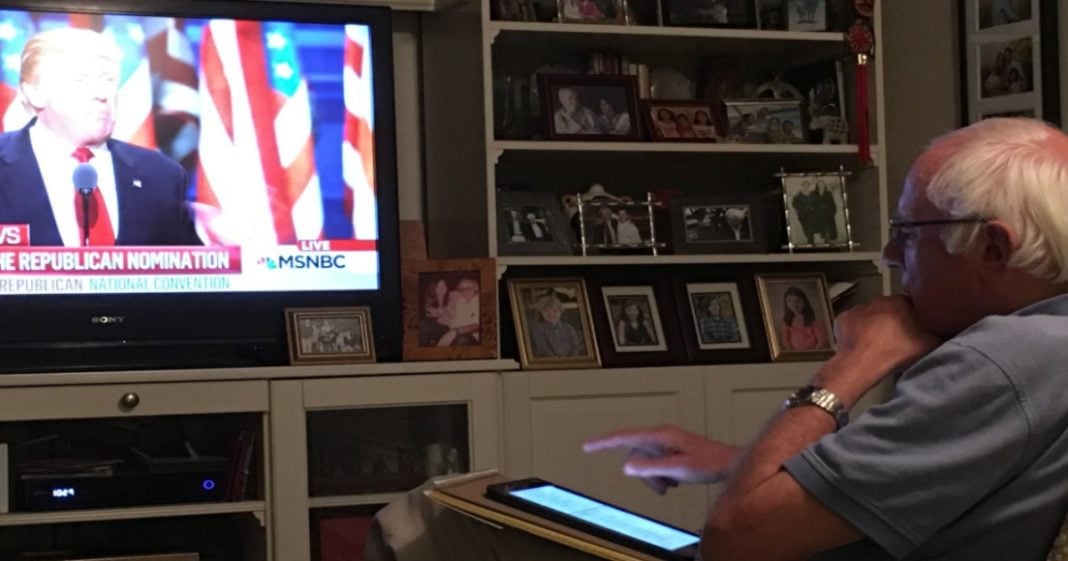 Though Bernie Sanders is no longer actively campaigning for the presidency, that doesn’t mean that he intends to take off a single moment from railing against the establishment and hateful demagogue Donald Trump.

On Thursday evening, the official Bernie Sanders campaign Twitter account sent out this image with the caption, “#RNCWithBernie.”

Along with the heart-warming image was a slew of tweets straight from the progressive mouth of the Senator, railing against the hate and divisiveness being spewed from Donald Trump.

Surrounded by the comforts of home, Bernie stayed active, sharing his thoughts about the Republican nominee.

Trump: “I alone can fix this.”
Is this guy running for president or dictator? #RNCwithBernie

Will there be one word about student debt or making college affordable? Or just concerned about more tax breaks for the rich? #RNCwithBernie

What a hypocrite! If Trump wants to “fix” trade he can start by making his products in the US, not low-wage countries abroad. #RNCwithBernie
— Bernie Sanders (@BernieSanders) July 22, 2016

We can expect Sanders to stay very busy in the wake of his failed venture for the presidency as he continues being the best Vermont Senator he can be, as well as opening himself up to new ventures like his previously announced Sanders Institute.

THe best thing he can do now is continue to remind his supporters and the rest of America just how dangerous a President Trump would be.