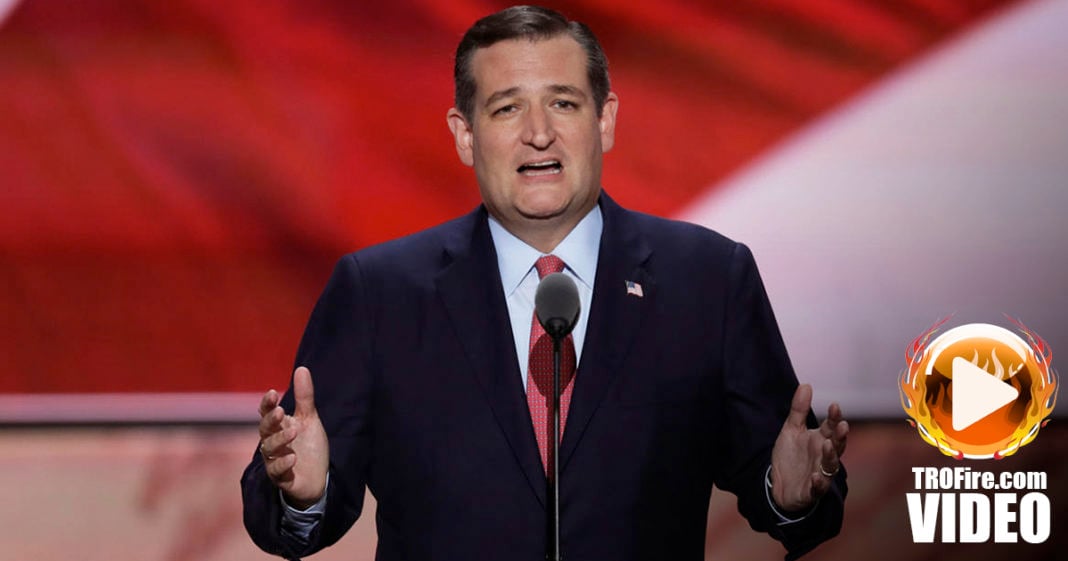 Ted Cruz refused to endorse Donald Trump during his RNC speech last night, a move that got him booed off the stage by the radicals in the crowd.  But that’s even the weirdest thing about Cruz’s appearance in Cleveland. Ring of Fire’s Farron Cousins discusses this.

Transcript of the above:

Last night was Ted Cruz Night at The Republican National Convention and it didn’t go as well as anyone at the convention actually planned. Cruz ended up being effectively booed off the stage. Take a look.

Now the reason for all the booing is because Ted Cruz refuses to come out and officially endorse Donald Trump, in spite of the fact that he had to sign that loyalty pledge to eventually support the Republican candidate. Now during the time that all the booing was happening Cruz’s wife, Heidi, was actually in the crowd and had to be escorted out by security in order to protect her. There were violently looking Republicans in the crowd coming towards her, so they wanted to get her out before somebody harmed her.

Now this is the state of the current Republican Party, but what’s even more interesting than Cruz getting booed off stage is what he actually said during his little speech. He tried to make it sound like The Republican Party has always been the party of civil rights. He brought up Abraham Lincoln. He brought up The Republicans fight for The Civil Rights Act, which didn’t really happen. He wanted to show the world that The Republicans do care about African Americans, and Latinos, and Hispanics, and everyone in between, but what he was really doing was campaigning for 2020. Ted Cruz is not done. We have not seen the last of this little creep. He is going to continue running for president until he’s physically unable to run for president anymore. Last night wasn’t about him coming out to support Trump, it was about him laying out what he thinks the voters want to hear for 2020. He knows Donald Trump is most likely going to loose, so he is setting himself up for a 2020 run.