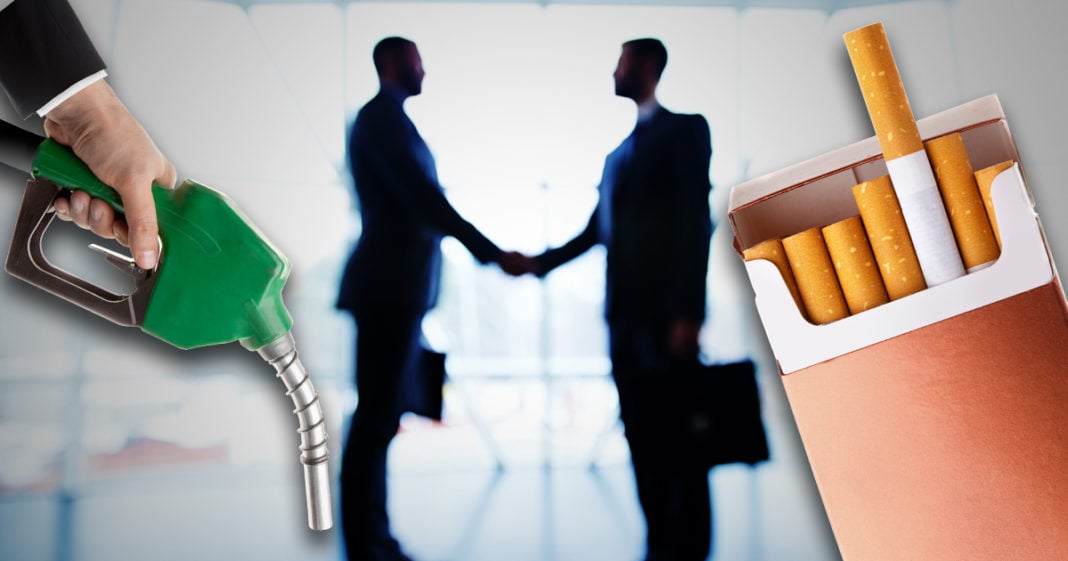 Over the past several months, The Ring of Fire and other Progressive media outlets have reported on how Big Oil (particularly Exxon-Mobil) has been covering up evidence of climate change since the 1970s.

It turns out that the cover up has been going on far longer. In fact, Exxon-Mobil’s corporate ancestor, Humble Oil, was manipulating scientific information in order to influence public opinion as long ago as the 1940s. It’s similar to the way Big Tobacco had been covering its own rear end since medical science started making connection between smoking and lung cancer in the 1930s.

Similarities between the two are no coincidence. Egregiously, these two corporate criminal enterprises were sharing marketing strategies and methods of spreading disinformation for decades.

On the surface, it would appear that Big Oil and Big Tobacco are unlikely corporate bedfellows. But consider that convenience stores represent a major retail outlet for both cigarettes and other tobacco products and gasoline. Since they are a high-markup item, the oil companies that kept cigarette vending machines back in the day were anxious to preserve their profits. It was a textbook case of a symbiotic relationship.

This lurid tale has been uncovered by the Center for International Environmental Law (CIEL) in Washington D.C.. A short documentary film produced by the organization tells the story of the entangled relationship between Big Oil and Big Tobacco. It is a relationship that dates back more than sixty years.

Back in the 1950s, Monroe Rathbone, head of Standard Oil (another one of Exxon-Mobil’s corporate forebears) was also on the board of the American Cancer Society’s Committee on Smoking and Public Policy. At the same time, oil companies – in which tobacco companies held financial interests and vice-versa – were developing cigarette filters and sharing testing methods. It doesn’t take a genius to see the clear conflicts of interest here, and it doesn’t stop there.

For the past several months, CIEL has been researching more than 14 million documents showing the collusion between Big Oil and Big Tobacco. Earlier this year, CIEL released documents proving that oil company executives, engineers, and scientists were acutely aware of carbon dioxide’s role in global climate change since 1957 – and probably long before that. According to Carrol Muffet, President and CEO of CIEL, instead of exploring options to mitigate environmental damage and come up with alternative energy sources, oil companies decided to “invest in research to explain away the climate risks.”

What is even more unforgivable is that the oil industry had the technology to reduce and eventually eliminate CO2 emissions in 1963! On December 31st of that year, yet another of Exxon-Mobil’s corporate predecessors, Esso, filed Patent #3,116,169 with the U.S. Patent Office for “Fuel Cell and Fuel Electrodes.” The device was a catalyst, using oxygen to produce clean, efficient electrical energy.

Why didn’t oil industry players pursue this technology? Let the Exxon’s own words condemn them:

“There is no doubt that increases in fossil fuel usage and decreases of forest cover are aggravating the potential problem of increased CO2 in the atmosphere. Technology exists to remove CO2 from stack gases but removal of only 50% of the CO2 would double the cost of power generation,” [emphasis added].

It’s simple; It was cheaper and more profitable to keep on drilling. Instead of exploring and investing in ways to mitigate and reverse the massive environmental damage they knew their product was causing, Exxon-Mobil and its partners in crime poured their resources into ways of adapting – new, taller oil rigs, for example, that could withstand rising sea levels, as well as insane and unworkable ideas to control the climate.

One of these ideas – on which Exxon actually filed a patent – was to literally pave over large, dry regions of the planet in order to create heat and increase rainfall. That brilliant idea was developed by one of Exxon’s own scientific advisers, James Black. Black was one of the scientists who warned the industry of the impact of fossil fuels on climate, but his solution was essentially more of the same (of course, what else would he tell the people who signed his paycheck?).

Another great plan was to spray black carbon into the air in order to create winds that would simply blow away the smog. It must not have occurred to the folks at Exxon that even if such an idea was workable, the smog would have to go somewhere. And of course, there was money to made; after all, asphalt is a petroleum product. Furthermore, while the industry would be internalizing all those profits, they would be able to saddle the rest of us with the costs by getting rid of noxious wastes on the cheap.

Today, we are all paying the price for this insanity.

And how does this all relate to the relationship between Big Oil and Big Tobacco? Basically, it was a marriage of convenience, but hardly a love affair. To be sure, the two shared common financial interests. But there was more to it.

With the increase in the cancer rate in the latter part of the 20th Century, the tobacco and oil industries began pointing fingers at each other. According to Muffet, Big Tobacco had an obsession with Big Oil that “bordered on paranoia.” As the two industries watched each other, they came up with new and creative methods of “plausible denial” and ways to confuse and mislead the public. Between that and the way the industries have bought off lawmakers over the decades, little has been done to address the disastrous consequences to public health.

Now that the evidence has come out and CIEL has released documentation for the world to see, will there be consequences?

In July of 2014, a Florida woman was awarded $23.6 billion in a lawsuit against tobacco giant R.J. Reynolds. That was only the most recent victory in a long battle to hold Big Tobacco accountable.

Late last year, the State of New York started a major investigation into Exxon-Mobil’s deception of the public over the climate change issue. As of March, 17 more attorneys general have joined the investigation. Then, this past May, the Massachusetts-based Conservation Law Foundation began legal action against the oil company juggernaut over pollutants leaked into the confluence of the Mystic Island End Rivers from one of its terminals. It is the first lawsuit to link a localized incident to the broader threat of global climate change and the oil industry’s culpability.

Big Oil is a different animal. Not only does it have more resources than big tobacco, it sells a product that runs so much of society’s machinery. Nonetheless, the opening salvos in what promises to be a long, hard battle have been fired. As people wake up to the gargantuan lies that Exxon-Mobil has fed them for over half a century, and as they realize that a “Corporate Person” was willing to put the entire future of humanity at risk for the sake of making a few extra billion dollars, it’s a good bet that the day of reckoning will come.

We can only hope that it comes in time.