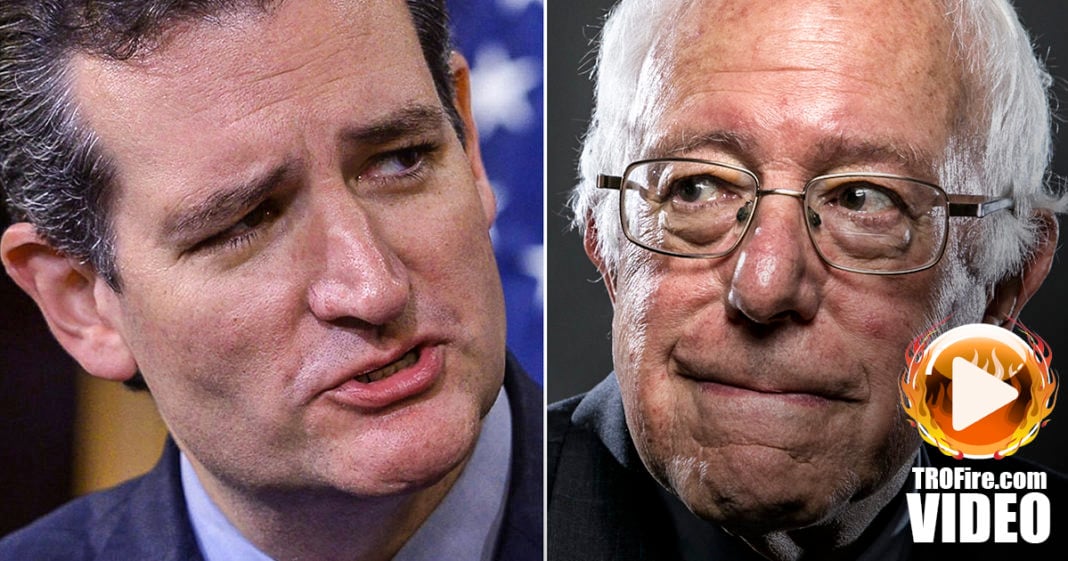 During an interview recently, Ted Cruz said that he’s not quite ready to endorse Donald Trump for President. But buried in that interview transcript was a tacit endorsement of the ideals of Bernie Sanders. Ring of Fire’s Farron Cousins discusses this.

Read the transcript of the above video:

Ted Cruz has been very silent since he dropped out of the Republican race, and I don’t think anybody wants to complain about that at all. The less we hear from Ted Cruz, the better. However, in an interview posted on Politico, he said that he’s not quite ready to endorse Donald Trump, but that he is going to use his speaking slot at the RNC to help ensure the future of the Republican Party, push the party to what he wants it to be. Then, later on in the interview, he said something that was actually both shocking and intelligent. This is what Cruz said:

“Listen. Bernie talks about how Washington is corrupt; both parties are in bed with the lobbyists and special interests. I think he’s exactly right.”

Those are the words that came out of Ted Cruz’s mouth when discussing the policy positions of Senator Bernie Sanders. Now, that’s huge, especially coming from somebody like Ted Cruz, whose campaign was completely funded by lobbyists and corporate interests, the same people that he thinks should not have as much power in Washington. Look, I don’t buy it whatsoever, and in fact Cruz said that this is what he would tell Bernie supporters that he would meet on the campaign trail.

Ted Cruz is in a bit of a bind at the moment. He doesn’t want to support Donald Trump, but he’s got to ensure the future of the Republican Party. What better way than to just lie to them, and say hey, remember that socialist who ran for president, that everybody really liked, but he just wasn’t able to get enough votes? I’m pretty much the same thing, just with darker hair, and a little creepier face. That’s what Ted Cruz is telling voters right now. It’s not going to work. He is not going to pull a single democrat over to his side, or a populist, or even a socialist, because nobody trusts Ted Cruz. If all the reports that have come out in recent years are any indication, nobody even likes Ted Cruz, not even the Republicans.