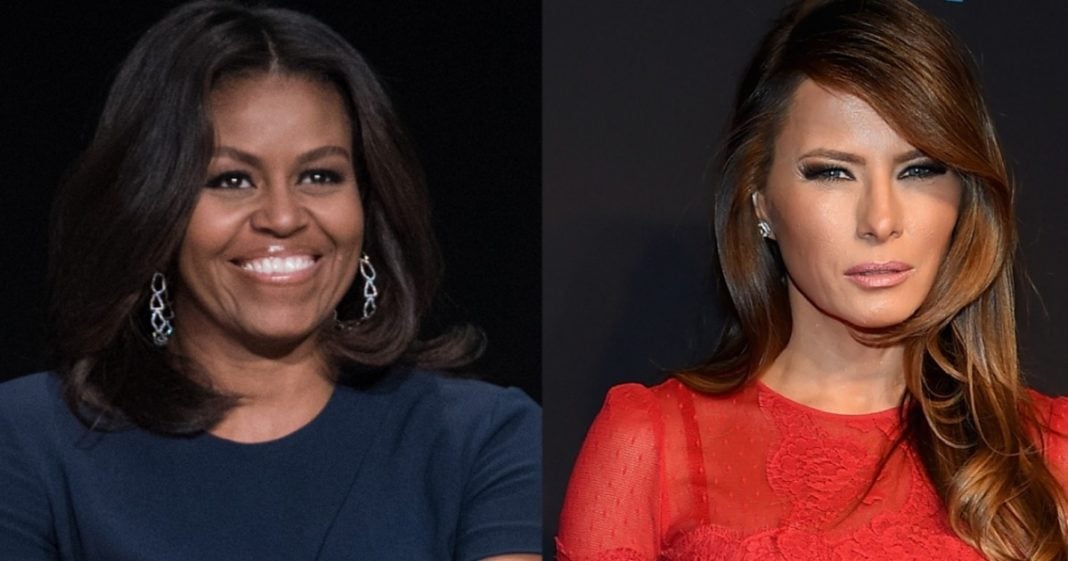 Clearly Melania didn’t consider the fact that the same internet which turned up nude and scantily clad photos of her from decades ago might also be able to spot the not-so-subtle similarities between her RNC speech Monday evening and a speech given by Michelle Obama during the 2008 election season at the Democratic convention.

After everyone and their mother noticed the blatant plagiarizing from Melania, the campaign denied the fact and said that what Melania stole was simply “common words and value shared by most Americans.”

This blunder is a major one for Mrs. Trump as this is her first major debut to the public, having stayed out of the public eye for nearly two months.

Here is a comparison of the section of the speech Melania stole and her words on Monday evening:

Melania Trump 2016 –
“From a young age, my parents impressed on me the values that you work hard for what you want in life, that your word is your bond and you do what you say and keep your promise, that you treat people with respect. They taught and showed me values and morals in their daily lives. That is a lesson that I continue to pass along to our son. And we need to pass those lessons on to the many generations to follow. Because we want our children in this nation to know that the only limit to your achievements is the strength of your dreams and your willingness to work for them.”

Michelle Obama 2008 –
“And Barack and I were raised with so many of the same values: that you work hard for what you want in life; that your word is your bond and you do what you say you’re going to do; that you treat people with dignity and respect, even if you don’t know them, and even if you don’t agree with them. And Barack and I set out to build lives guided by these values, and to pass them on to the next generation. Because we want our children — and all children in this nation — to know that the only limit to the height of your achievements is the reach of your dreams and your willingness to work for them.”

Video from @Gawker shows where Melania’s speech may have copied Michelle’s pic.twitter.com/Pa6psjv9Jv