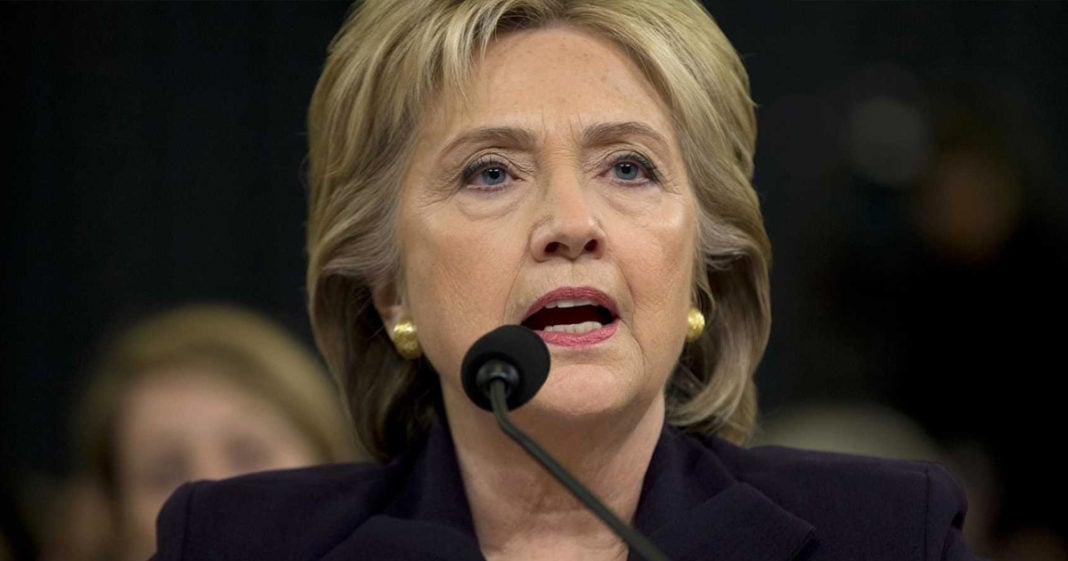 Now that she is firmly ensconced as the Democratic Presidential Nominee, Hillary Rodham Clinton is beginning to sound more and more like her defeated rival, Bernie Sanders. Whether it is because she needs to win over Bernie’s supporters or because she’s seen the progressive light, the nominee who has been labeled as the Democratic Party’s “Wall Street Candidate” by progressives is actively addressing one of the hot-button issues of our time: the disastrous Supreme Court decision known as “Citizen’s United.”

Over the weekend, Clinton promised to introduce a Constitutional amendment to overturn that decision, if elected, but can she do it?

Of course, any President can propose an amendment to the Constitution, as can any member of Congress. The trick will be getting Congress to sign on, which will be no easy task. Most members of Congress are on Wall Street’s payroll and think that money as “free speech” is a fine idea. Even Clinton herself has benefited from the millions of dollars raised by the Super PACs that were spawned as a result of the Citizen’s United ruling; if she is elected and follows through on her promise, she would be biting the very hand that has been feeding her. Then, there is the chore of getting it ratified by two-thirds of the states. That part of the job could take years.

But let’s take a look back at what this SCOTUS decision means, and what it has done to our democracy.

In 2004, film maker Michael Moore came out with Fahrenheit 9/11, a documentary that raked the Bush Administration over the coals for its response to the terrorist attacks of September 11. The right-wing organization euphemistically called “Citizens United” filed a complaint with the Federal Elections Commission (FEC), charging that Michael Moore’s film was a form of “political advertising.” Lawyers for Citizens United claimed that because the film was produced and distributed through Moore’s own company, it was a form of corporate spending, publicly promoting or denigrating a political candidate – a violation of both the Taft-Hartley Act of 1947 (restricting the political activities of labor organizations) and the Federal Election Campaign Act of 1974 (regulating campaign donations  from business and requiring public disclosure of campaign finances). Therefore, the film could not be aired within 30 days of a primary or 60 days before the general election.

After an investigation, the FEC threw out the complaint, finding “no reason to believe the respondents violated the Act because the film, associated trailers and website represented bona fide commercial activity, not ‘contributions’ or ‘expenditures’ as defined by the Federal Election Campaign Act.”

Citizens United  then decided to go into the movie business for itself. Over the next three years, the organization produced a number of documentaries in order to promote candidates it favored and discredit those it didn’t. One of them, which came out just in time for the contentious 2008 election, was Hillary: The Movie. Released as a video-on-demand feature through cable outlets, the “documentary” (if it can be called that) basically trashed Clinton.

It’s something that Clinton remembers well – and probably has never forgiven. But more on that later.

In preparation for the release of Hillary: The Movie, Citizen’s United worked to cover its behind by filing suit in U.S. District Court in order to challenge rules regulating “electioneering communications” – including the broadcast of its own documentaries – on Constitutional grounds. Lawyers for the plaintiff argued that regulations limiting donations from corporations (as well as labor unions) was unconstitutional, as were disclosure rules as they applied to promotional ads for the film. Again, the court decided against Citizen’s United, ruling that the movie was nothing more than an appeal to voters to reject Clinton, and therefore advertisements could not be aired within 30 days of the Democratic Primary.

Eventually, Citizen’s United took its case against the FEC to the Supreme Court. Preliminary arguments were heard in March of 2009. At first, the SCOTUS looked at the narrower issue: could Citizen’s United promote their film or not? However, it soon became apparent that there were larger issues at stake.

On the last day of its term on 29 June of that year, the SCOTUS called for a second round of arguments to be presented in September. At stake was an earlier ruling, McConnell v. FEC (yes, that McConnell), which challenged the constitutionality of the Bipartisan Campaign Reform Act of 2002 (better known as the McCain-Feingold Act), regulating campaign financing, limiting the use of “soft money” (donations going to a party and not any specific candidate) and “electioneering communications” – as well as requiring candidates to appear in their own campaign ads and take responsibility for the message.

The SCOTUS ruled 5-4 in favor of Citizens United, ruling that it could promote and air the film. However, the Court went much further. At first, Chief Justice and Bush appointee John Roberts wrote a narrow opinion to that effect, stating that presentation of the film did not violate the McCain-Feingold Act. But then, Justice Anthony Kennedy wrote a concurring opinion, stating that the laws restrictions on political spending by corporations and labor unions was a complete violation of the First Amendment right to free speech. This appealed to the right-wingers on the Court, who eventually convinced Roberts to reassign the writing of the majority opinion to Kennedy. In this way, the opinion wound up covering the broader issue.

John Robert’s decision and the subsequent majority opinion threw out decades of precedent, expanding the case far beyond its original scope. It essentially turned corporations into people, and made money into “free speech.” In 2012, columnist Jeffery Toobin, writing in The New Yorker, pointed out that “the new majority opinion transformed Citizens United into a vehicle for rewriting decades of constitutional law in a case where the lawyer had not even raised those issues.”

Since that disastrous ruling, the amount of money being poured into political campaigns has exploded. The past six years have seen the creation of monsters called “SuperPACs,” by which large corporations and wealthy individuals are able to raise unlimited amounts for races and causes they favor (arguably, labor unions and not-so-wealthy individuals can do it as well, but let’s get real, here – how many unions have the resources of Comcast?). Would-be king-makers the Koch Brothers pledged in 2015 to spend the staggering sum of $1 billion in order to advance their Ayn Rand-ian agenda.

And yes, Hillary Clinton herself and other Democratic candidates have been beneficiaries of this new system. But now, Clinton is promising to turn on the very forces that have financed her political success.

Regardless of her motivation – whether it’s an attempt to win over Bernie’s supporters, because she’s still angry over Hillary: The Movie and wants to stick it to Citizen’s United, or simply because she knows it is what We The People are demanding – it’s a noble gesture. Of course, as president she would have very little direct power. As we all should know by now, when it comes to domestic bread-and-butter issues that affect our lives on a daily basis, it’s all about Congress and what they choose to do – or not to do. The Executive Branch can only advise and propose legislation.

That said, there are a few actions that a president can take, such as issuing Executive Orders. This, Clinton has also promised to do. According to one of her campaign officials, Hillary Clinton intends to sign such an executive order that would require all corporate donors receiving federal contracts to publicly disclose any and all political donations.

Whatever your motivations, Ms. Clinton – whether they be political or personal – we applaud you and stand behind you in your steps to restore real democracy, and we expect you to follow through.