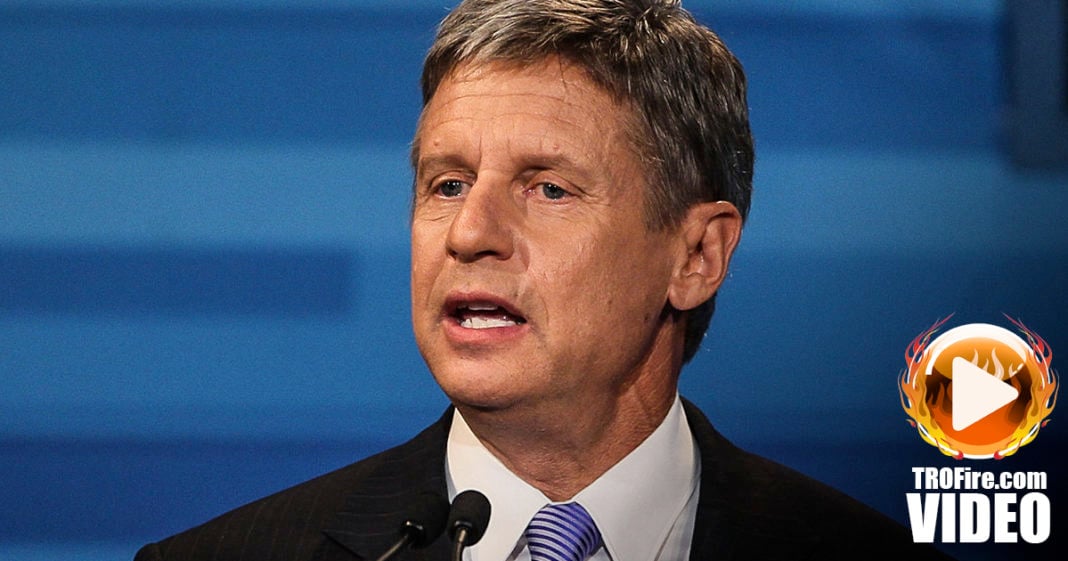 Gary Johnson is seeing his poll numbers slowly tick upwards and he’s on the verge of qualifying for the Presidential debates.  Could he be the dark horse candidate that throws the two-party system into disarray? Ring of Fire’s Farron Cousins discusses this.

We have seen polls for several months now telling us that the American voters aren’t happy with Hillary Clinton, they’re not happy with Donald Trump. They want a better option as far as candidates go. In fact, over 30% of the country say they would support a Third Party candidate. We’ve seen polls like that in the past, but this time according to the latest numbers coming out Americans might actually be serious about this.

Gary Johnson, the Libertarian candidate for President is now polling at 12%. Meaning if he just jumps up 3 more percent he will qualify for the Presidential debates. The networks have set the threshold at at least 15% support among the American public in order to participate in the debates and Gary Johnson is already knocking on that door. That is remarkable, especially because Gary Johnson is going to take votes away from Donald Trump. He may get a few disaffected Democrats, those who think that we should torpedo the economy which is basically the foundation of Libertarianism but what’s even more telling is that Dr. Jill Stein with the Green Party is unable to make anything of this lack of interest in the Republican and Democratic parties.

She is still consistently polling anywhere between about 2 and 4%. There are some very hardcore Bernie Sanders supporter who are out there trying to get disaffected Bernie supporters to go to Jill Stein but unfortunately for them it’s not working. I’ve followed Dr. Jill Stein for many years, I like a lot of what she has to say. I did not agree with her when she said that Brexit was a good thing. It is in fact a very terrible thing. She’s got some policies that I very strongly disagree with, but overall she’s very decent. She could have a huge role in an administration, but she kind of suffers from the same problem as Donald Trump. She doesn’t have the experience and that is very concerning. To appoint her to a position, which I think Hillary Clinton should strongly consider if she wins the White House, perhaps Dr. Jill Stein running the Environmental Protection Agency. I think that would be a phenomenal pick but it doesn’t look like Jill Stein is going to get the numbers necessary to participate in the debates.

Overall the Third Party numbers which are now at roughly 16 to 17% of the total voting population doesn’t bode well for either Hillary or Donald Trump. When you look back historically Bill Clinton, Hillary’s husband, never got 50% of the vote in either of his elections. It was because of Ross Perot in ’92 and ’96 that Bill Clinton was able to even win. He did that with 49% or less of the vote, so there was never a point in the history of this country where 50% or more of the American public wanted a Clinton to be president. We see that today in the poll numbers. I think the latest polling data has Hillary Clinton at 44 or 45%. If that happens again, if Gary Johnson sucks away enough voters from both Hillary and Trump and Jill Stein does the same we could once again be looking at a President who didn’t even get half of the vote.

To me that’s not a Representative Democracy. In fact, when we only have 2 main party candidates that’s not a democracy. That’s the allusion of choice. You can chose between bad or worse, so it’s great that these Third Party candidates are surging. I would love to see more of that in the future. Severely do not want a Libertarian to win, but the Green Party could find probably a better candidate and perhaps in the future become a real political force in this country.