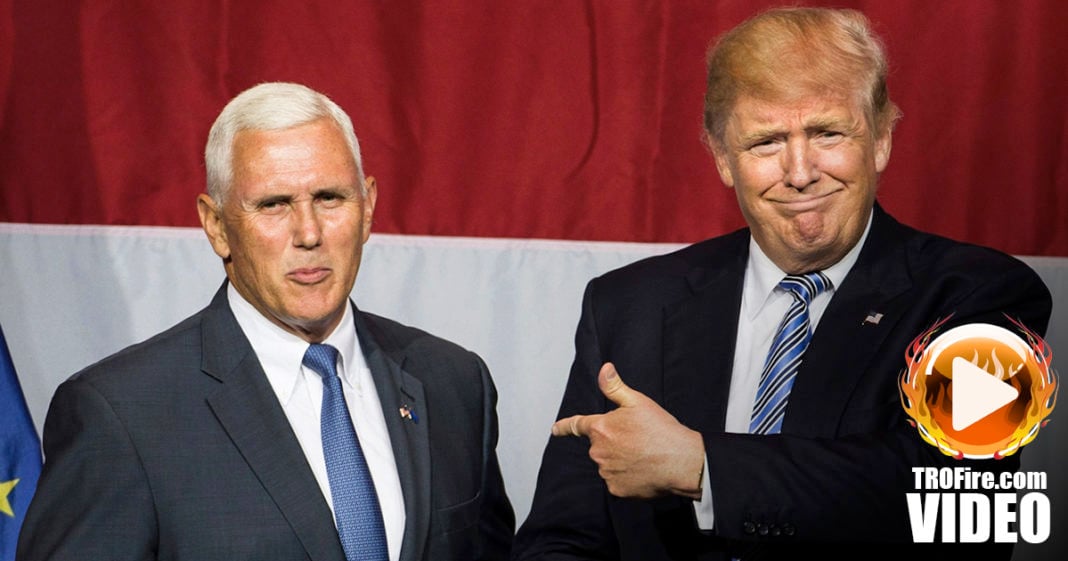 Mike Pence is officially Trump’s running make, creating the whitest ticket since Bush/Cheney (at least Paul Ryan was “youthful.”)  Worse still, these two don’t appear to agree on anything, which is going to make the GOP circus that much more interesting. Ring of Fire’s Farron Cousins discusses this.

Last week, the speculation finally ended and Donald Trump announced that Mike Pence, governor of Indiana, was going to be his running mate in this year’s election. Now, in terms of looking Republican-ish, you could not pick a whiter ticket. I mean, Mike Pence, very white guy, very white hair, affluent. He is the poster child of the Republican Party, as is Donald Trump. They could have picked a woman to try and shore up Trump’s shortcomings with women. They could have a black person, a Hispanic person. Basically anybody but an old, white guy would have helped Trump out more than a white guy, but they went with Mike Pence because Republicans are not very smart.

Here’s what’s even funnier. Now, obviously a lot of people have said they would decline a Trump nomination or recommendation to be his running mate, so Pence was probably one of the only people they could get. In the past year, according to Raw Story, Pence has disagreed with Trump almost more than he’s actually agreed with him. For example, Donald Trump doesn’t hate Planned Parenthood as much as other Republicans and Mike Pence has made it a hallmark of his administration to do nothing except wage war on women’s health. Then you have issues like the TPP, which Donald Trump claims to be against, whereas Mike Pence is a huge supporter of the Trans-Pacific Partnership. Then you have gay rights. Donald Trump, not horrible on gay rights. Mike Pence, again, wants the homosexual community to not have any civil rights whatsoever. Of course, Donald Trump wants to ban all Muslims. Surprisingly, Mike Pence not against that.

You have two Republicans here on the ticket who do not agree with each other on pretty much anything. They had a horrible interview together this past weekend where they couldn’t ever get on the same page. Now, Donald Trump’s poll numbers have been falling. They have not been doing very well for a very long time. He has not crossed 45%, I think since May. He needed a strong running mate to boost his poll numbers. That’s politics 101. You pick somebody who shores up your weaknesses. Donald Trump failed that. He’s going to get no bounce from this Pence nomination and he’s going to get no bounce from this disaster of a convention that’s taking place this week. In short, Donald Trump had the opportunity to make his campaign great again, and just like everything else, he failed miserably.