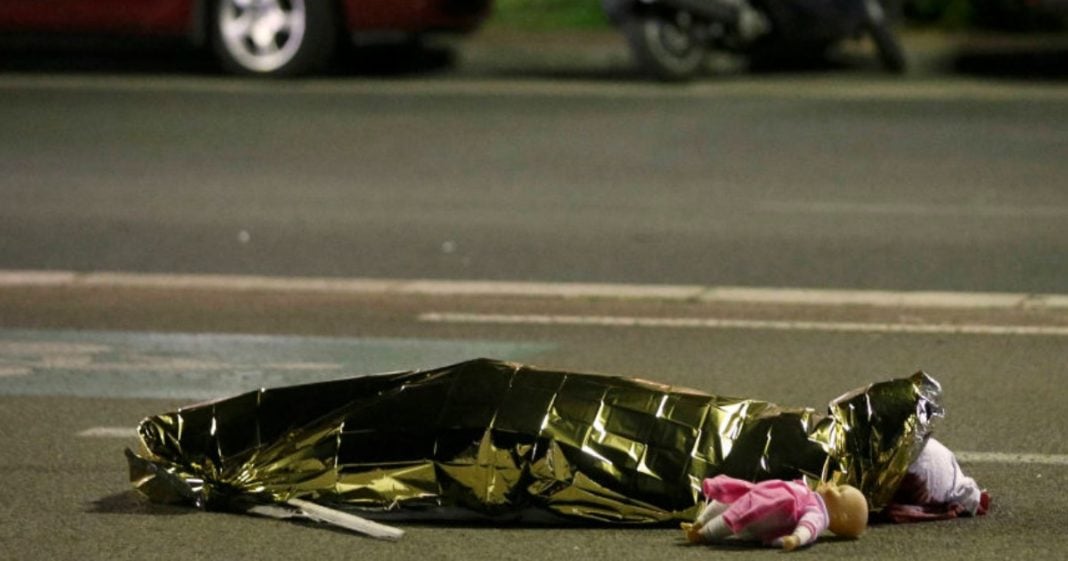 A man who has been identified as Mohamed Lahouaiej Bouhlel committed an atrocious act of terror upon citizens on holiday in Nice, France, on Thursday evening when he drove a large truck through the crowded streets of the city.

The city streets were packed with people celebrating the french holiday Bastille Day when the man used a hired truck – or lorry, as you will hear it referred to in U.K. terms – to plow through the large crowds. The truck traveled over a mile through the crowd, maiming, killing, and injuring the trapped people.

84 people were murdered at the scene, with 50 others in critical condition in local hospitals. An untold multitude of others have been injured as well.

The attacker was killed by police after he left the truck to begin shooting at pedestrians.

Eyewitness reports claim that before the truck stopped, some individuals jumped onto the truck and attempted to stop it or slow it down so others could escape. Gristly footage and photographs are circulating online, showing the horror.

Bouhlel was married and had three children. Police say that he was often in trouble with the law, but they did not suspect him of having terrorist links before now. Authorities are currently holding Bouhlel’s wife in police custody and are raiding the apartment where Bouhlel lived alone – apparently estranged from his wife.

Authorities have categorized the attack as a “terrorist act” and the city has again been plummeted into an official state of emergency. The state of emergency from previous attacks had just recently been lifted.

ISIS nor any other terrorist organization has yet claimed the attack.

Heads of state all over the world have commented on the attack, calling for war against ISIS and offering their condolences to France for the tragedy.