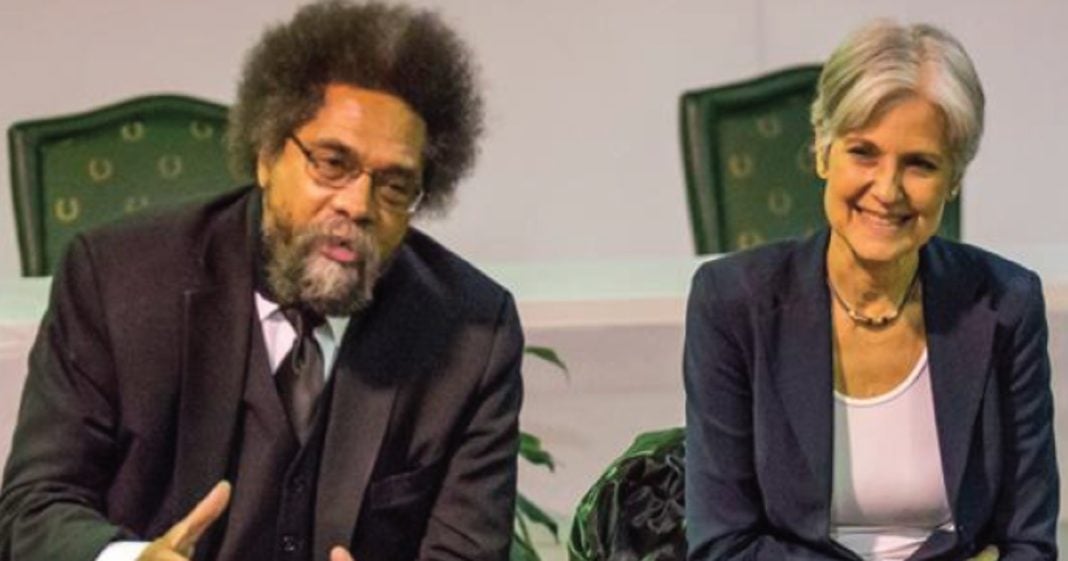 One of Bernie Sanders’ more fringe celebrity supporters Cornel West has now placed his support in another camp in the wake of Sanders’ endorsement of Hillary Clinton.

West made the announcement on Thursday, calling Green Party candidate Jill Stein the “only progressive woman in the race.”

In an editorial for The Guardian, West explained,

“This November, we need change. Yet we are tied in a choice between Trump, who would be a neo-fascist catastrophe, and Clinton, a neo-liberal disaster. That’s why I am supporting Jill Stein. I am with her — the only progressive woman in the race — because we’ve got to get beyond this lock-jaw situation.”

On Friday, Stein responded to West’s endorsement by thanking him for his intellectual activism and his endorsement in kind.

“I am incredibly honored to have the support of the legendary Dr. Cornel West, a great American intellectual activist who has tirelessly carried the torch passed by love warriors like Dr. Martin Luther King Jr.. Dr. West’s truth-telling voice is especially needed now, with Americans across the country rising up against a morally bankrupt political system.”

West doesn’t have any ill will for Sanders, though, as he says he has “deep love” for his “brother” Bernie Sanders. The two men have just reached an impassable obstacle in Sanders’ support for Clinton.

We can expect to see more endorsements like West’s now that Hillary Clinton is the Democratic nominee. For many Sanders supporters who have spent half of a year or more despising Hillary Clinton and believing in a candidate who is her polar opposite, finding an alternative candidate is the only option. For many of these people, the hashtag #JillNotHill is their new home.

Currently, Stein lags far behind the two main party candidates, and has a significant gap between herself and Libertarian candidate Gary Johnson. She has a lot of ground to gain if she hopes to make it onto the main debate stage in September.

This race, possibly unlike any other, may make itself available to four, rather than just the usual two, major general election candidates – a groundbreaking and exciting prospect for a political system dwelling in corruption and mediocrity.