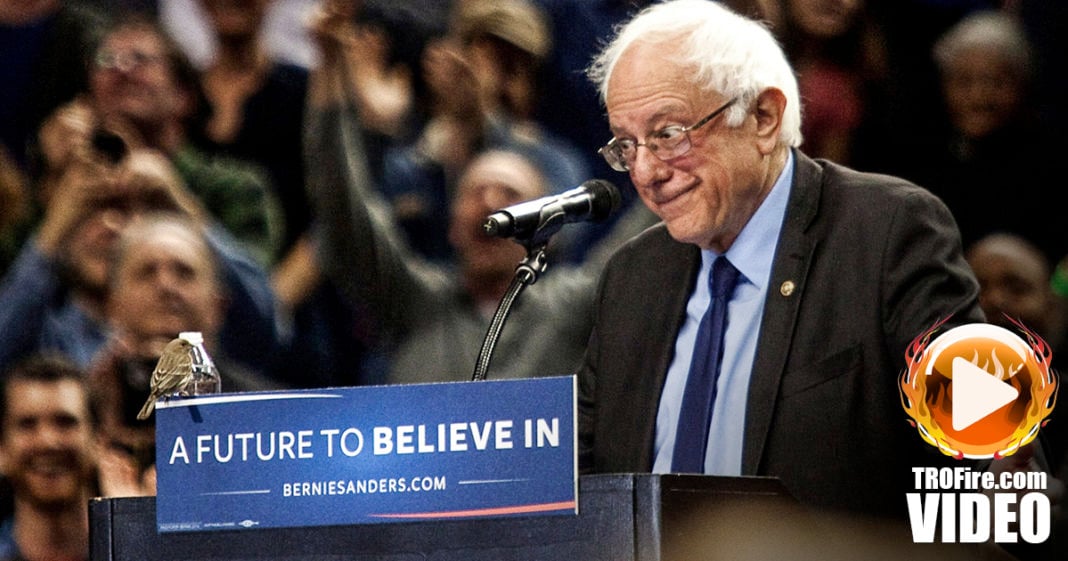 On Tuesday, Bernie Sanders officially endorsed Hillary Clinton as the Democratic nominee for the 2016 election. Immediately afterwards, the backlash towards the announcement for Bernie supporters was extreme. So what does this mean for the future of the revolution? Ring of Fire’s Farron Cousins discusses this.

Tuesday, Bernie Sanders came out and formally endorsed former Secretary of State Hillary Clinton for presidency. Now, immediately as Bernie Sanders was on stage talking, the backlash from his supporters on Twitter, Facebook, and other online sources was intense. He was labeled a sellout, said he has betrayed his values. People said, “Well, I guess I’m Jill Stein now.”

Listen. Here’s the thing. The movement that Bernie Sanders really started in politics, this push to the left to get the Democratic party to go to the left. The fights that his platform committee appointees had in the last couple weeks to get progressive positions into that platform. Those haven’t gone away. That movement is still there but if you abandon it, then it has lost all its power and his candidacy was meaningless. That’s the thing that a lot of people just don’t get right now. They’re so angry that he would endorse Hillary Clinton, even though it was an entirely predictable diplomatic thing that always happens. That is how politics work and it’s not the best thing, but it is how it goes. Look. I am not a huge fan of Hillary Clinton by any means. I have supported Bernie Sanders candidacy, I supported him in the primaries, I did donate some money and yes, it’s disappointing that he did not win but I also understand what’s at stake. I’m not going to say, “You know what? Screw it. I’m going to let Donald Trump win the White House because I’m bitter.” I’m not going to do it.

Look what’s happening in this country right now as far as race relations and hatred go. I mean, we’re seeing black people straight up murdered by police officers and the Republican response to that is, “Well, they’re all thugs. They’re all bad people that probably deserved to die anyway.” That’s the Republican response. Do you think that’s going to get better or worse under Donald Trump? Now it may not get better under Hillary, but at least she is genuine when she says that she cares. Donald Trump will make things worse.

What about violence against Muslims? A few weeks ago I talked to Murtaza Hussain from the Intercept and there are documented cases where Donald Trump supporters are out there inciting violence, acting out violent acts against Muslim-Americans just for being who they are and it is directly related to Donald Trump’s hateful rhetoric. Another thing that’s going to get worse if Donald Trump wins the White House because these people who are willing to carry out these acts are going to feel empowered by a Donald Trump presidency. That’s what’s terrifying.

Yeah, this year is going to be a lesser of two evil elections, and that sucks. It really does. I get it. I’m not selling out. I still have my beliefs. I also know that there are other people in this country that are going to suffer immensely if Donald Trump wins the White House, and I have seen a lot of people on Twitter say to me, “Hey look, I survived 8 years of Bush administration, I’ll be fine for 4 years of Trump.” Well you know what? You know who didn’t survive 8 years of Bush administration? Several thousand US soldiers. That’s a pretty asinine and disrespectful comment for people to be making. You might have survived but people, honest to God, didn’t. This is getting ridiculous at this point.

The gains that the progressive movement has made as a result of Bernie Sanders candidacy will completely disappear if those volunteers, those fighters, those true progressives out there decide to completely abandon the Democratic party because you are the only thing pulling it to the left and if you go away, that party is going right back to the right and we’ll still have the problems with the system that we have right now. Voting third party right now, it’s just not going to happen. I mean, look at the polls. Most voters, almost 90% of this country have never even heard of Jill Stein. About 85% have never even heard of Gary Johnson. I don’t want to undermine their campaigns at all. I like a lot of what Jill Stein has to say. Unfortunately it’s not going to happen this year. We have to be realistic.

I mean hell, in the last two weeks, both Hillary Clinton and Barrack Obama have come out in support of a single payer healthcare system, and that’s because of the work that you people have been doing, and you’re willing to throw all that away because Bernie Sanders didn’t win. There were instances of erratic and irregular voting machines. There was voter suppression, but not enough to give him the election. I don’t buy that argument, I don’t believe it, and I don’t think you should either. There is not enough evidence to show that Bernie Sanders would have won if the system wasn’t rigged. It was not rigged any more than it usually is. The Democratic party needs to address that and they need to fix it, otherwise Republicans could steal this election from them.

I’m not going to buy into any of these conspiracy theories. Hillary Clinton did win. The system was not rigged in favor or against one person or another and yeah, Wasserman Schultz did her best to keep Bernie Sanders out of the public eye with the debates. If you want to consider that rigged, then yeah, that was rigged. They can’t influence the minds of the voters, and the voters are the ones who put Hillary Clinton as the nominee. We have to accept that. We can’t live in a fantasy world anymore. In the real world, you have so much more power than you realize and again, you’re willing to throw it away because Bernie Sanders endorsed Hillary Clinton. That almost speaks volumes to your character. Do you really want change or did you just want Bernie Sanders? Because Bernie Sanders wants change. It’s not about him, it never was. He wants to make the system better. He wants to inspires people to go work towards making the system better because he knows he knows he’s not going to be around for the next 20 years. Well you will be and if you’re not going to fight, then nothing is ever going to change.