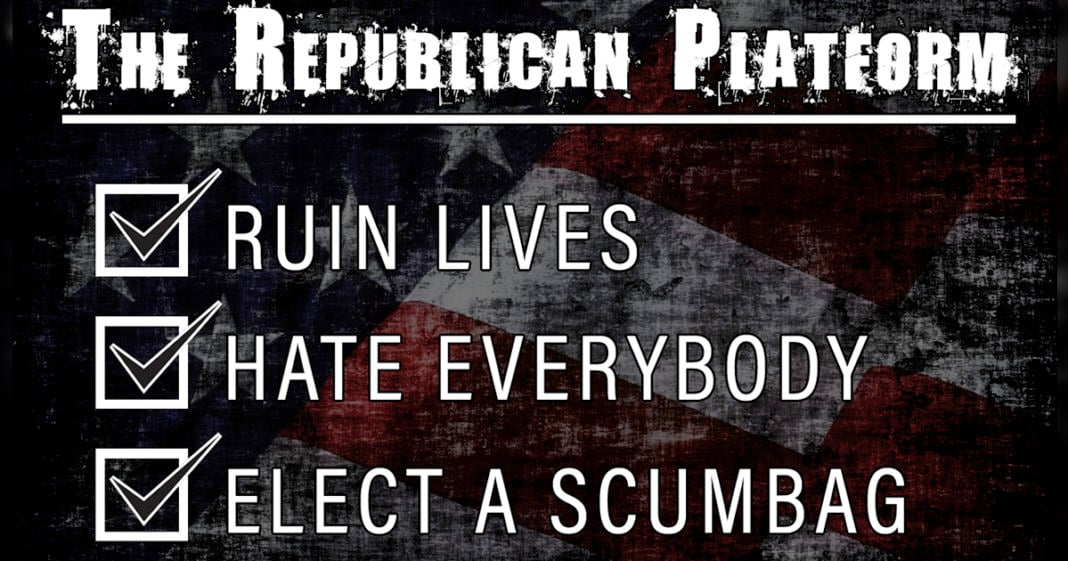 The Republican party platform looks like it’s finally coming together, and it damn sure is a doozy. And next week, we’re gonna see it in full force with the Republican National Convention. Ring of Fire’s Farron Cousins discusses this.

Here are some of the things that the Republican Party Platform says that the party is supposed to stand behind. One: Pornography is a public health issue. Not the Zika Virus. Not the pollution from corporations, nothing like that. Pornography is what is telling this country apart. No abortions for anybody, in cases of rape or incest or anything like that, it’s your job, you’re going to have this baby. Deal with it. That’s Republican world. Marriage is only between a man and a woman, so forget about having those equal rights you’ve been fighting for, LGBT community. Not going to happen on the Republican. Children should only be in homes with “traditional families.” A mother and a father that are both heterosexual, happily married, go to church every week.

Speaking church, Proper education, under the Republican Platform includes a healthy education involving the Bible and a good understanding of the Bible. Also in the platform, coal- one of the dirtiest fossil fuels in the world- is now a clean energy source. Parents can also force their LGBT children to go into conversion therapy, which is a proven method that does not work, but it does significantly screw up a child’s self esteem. It can screw them up mentally, but that’s what the Republicans want to do. They know it doesn’t work, but they have to be as anti everything as possible in this party platform. They’re taking away so many of our rights, it’s unbelievable. Basically they’re sending the country back to the 1700s.

You know, Donald Trump, at the Convention, is going to tell us what horrible republican he’s chosen as his running mate. Smart money says it’s going to be Mike Pence, possibly Newt Gingrich, although that seems incredibly unlikely. Those are about the only two people who’ve said they would actually serve in a Donald Trump administration. The scariest thing is that all of the Republicans in the GOP are signing off on this horrible platform committee. This is what the Republican Party stands for. No rights if you’re not white. That’s America’s Republican party.