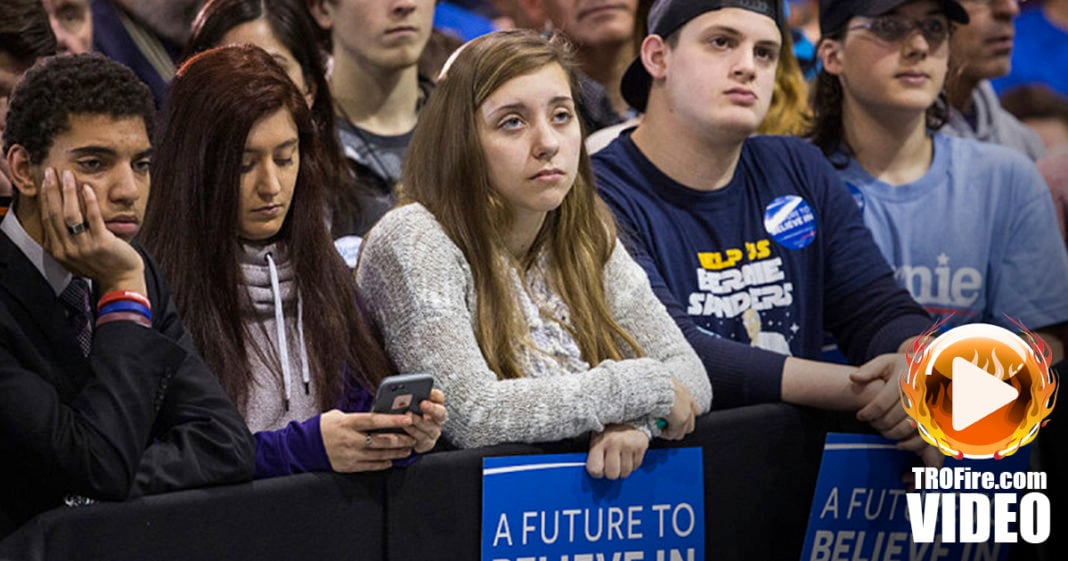 Bernie Sanders won 23 primary contests due to his broad support from the Millenial generation, the largest voting block in this year’s elections.  But now that he’s endorsed Hillary, as many has half of these voters are ready to turn their backs on the Democrats, which could have disastrous consequences for the Party in the near future. Ring of Fire’s Farron Cousins discusses this.

The Democratic Party right now is in a bit of a crisis. Bernie Sanders has endorsed Hillary Clinton. He hasn’t officially dropped out of the race yet, but he has endorsed her. He is not going to flip the superdelegates, so she has locked in the nomination, and that’s fine. Disappointing, but fine. Here’s the problem the Democrats have, though. Bernie Sanders won 23 contests throughout the primaries by winning the youth vote. Overwhelmingly, even today, that youth demographic, the 18 to 30-year-olds, overwhelmingly support Bernie Sanders, and they’re going to make up the largest voting bloc in this year’s election.

Historically, the voter turnout among that demographic is low, but with so many of them, they could still be enough to impact this election, and that’s why the Democrats have a problem. A new poll shows that 48% of the millennials who supported Bernie Sanders will vote for a third party candidate this year. More of that 52% said they’d go to Clinton than to Trump, but you’re still looking at half. The Democrats could be losing half of their youth support because Bernie Sanders didn’t win, and they do not like Hillary Clinton. This may not be a problem for the 2016 election, but you know when it will be a problem? In the 2020 election, and 2024, and 2028.

As we’ve talked about countless times over the years here at Ring of Fire, the problem with the Republican Party is that they only appeal to elderly white men, and you can’t sustain something if you only appeal to the elderly. The Democrats are going down that same path because they’re not recruiting the youth voters. They’re not offering them anything other than a Republican light agenda. That’s not acceptable. These youth voters got energized. They got active, and they got out there, because they care about things like climate change. They care about things like healthcare. They care about not starting endless wars, and right now, there is not a single major political party that’s offering solutions to any of those things.

You can’t really blame these youth voters for wanting to go to a third party. They’re the ones who are going to be running this country in 20 or 30 years. They’re the ones who are going to have to deal with the negative impacts of climate change, and so I think it’s time that the Democratic Party, and America in general, starts taking this voting demographic, these future leaders in America, it’s time to start taking them seriously.