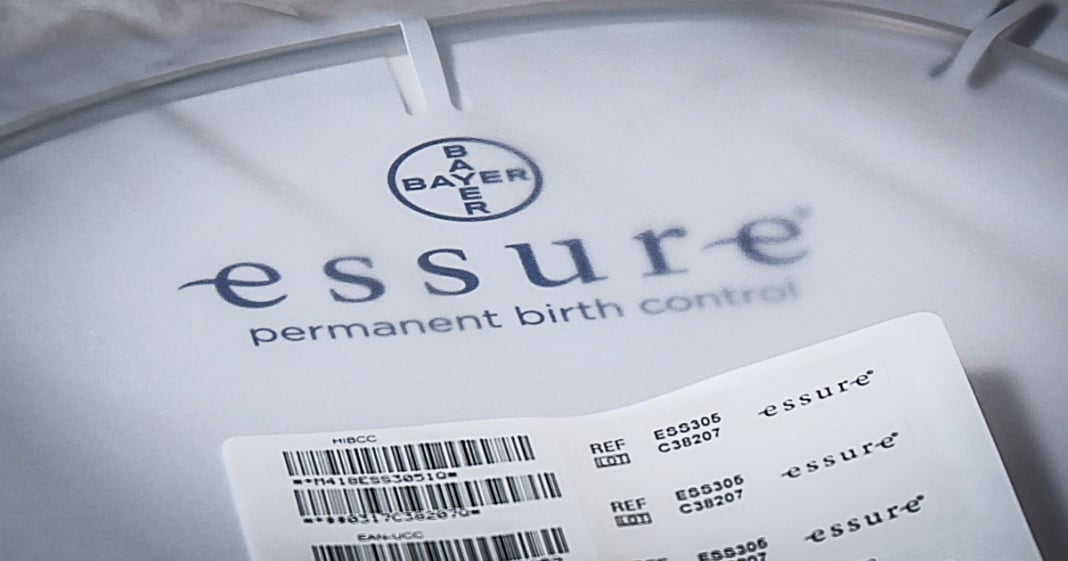 When it comes to birth control, the drug maker Bayer has the market cornered. But they also have more problems than any other company.

The Essure Permanent Birth Control implant was originally approved in November of 2002. Because it is actually implanted in the human body and is intended to protect, maintain, and enhance a patient’s health, the FDA considers it a Class III device. According to the FDA website, a device may also be classified as a Class 3 device when it is determined that the device “may present a potential unreasonable risk of illness or injury” or “for which there is insufficient information to make such a determination.”

Find out more about Essure side effects here.

Papantonio: When it comes to birth control the drug maker Bayer has the market corner but they also have more problems than any other companies that I’ve seen out there. I handle cases against these companies all the time. I have consumer lawyer, Travis Lepicier, with me now to give us the latest details about birth control devices that are ruining lives of women and in fact, causing the deaths of women. Travis, the FDA drops the ball again. I mean I’ve said it so many times on this show. It seems like almost every month there’s another FDA failure that’s killing people, and this is just another one of them. It’s killing women. It seems like women have become the target of the pharmaceutical industry and the device makers where they’re the ones suffering the most from the negligence of the company. Sometimes it’s pure intent of the company but certainly the dysfunctional nature of the FDA is causing a lot of these problems. Tell us about this Essure, this birth control issue.

Travis: Sure. Well, thank you for having me. Essure is a permanent contraceptive, it’s intended to be a permanent contraceptive for women. What it is is two small metal coils that are inserted into a woman’s fallopian tubes with the intention of her skin, her tissue inside her fallopian tubes wrapping around these coils and blocking the eggs from traveling down her fallopian tubes to prevent her from getting pregnant. These tubes or these metal coils are inserted into her fallopian tubes. What the company says is it’s a non-invasive procedure so it’s supposed to be very simple for the coils to be inserted, and it’s supposed to be a much safer and less invasive alternative to having the woman’s tubes tied which is a traditional form of contraceptive.

Papantonio: Right. The idea is that you create a scar tissue within the fallopian tubes, the scar tissue actually is permanent. This is a permanent sterilization process and rather than going through the other … There are two or three ways to accomplish that but this probably is the least attractive. If you look at this what’s happening from the reports that I’m looking is you have breakage of these coils, and we’ll show the viewers what it looks like on screen here. That you’ll have breakage from those coils, you’ll have nickel allergies, you’ll have heavy metals actually moving through the body and causing all the disease process that heavy metals can cause. Most of the time that’s auto-immune types of problems. Then you’ve got also the idea that this doesn’t even stop pregnancy and the pieces that break off seem to be migrating through the body. Did I get that right? Is that kind of a constellation of the types of illnesses that we start seeing or problems that we start seeing?

Travis: In a nutshell I think you’ve captured what we are seeing. A lot of the women who have the Essure devices implanted are complaining of your typical general complaints of abdominal pain. Then when you look a little further into what these women are reporting they are reporting that the device has migrated, they are reporting that the device has perforated their uterus, perforated their fallopian tubes, or migrated to other areas in the pelvic region causing them severe pain. To touch on the nickel allergy this device is comprised of nickel and many women have an allergy to that metal. If they’re not adequately tested it can obviously cause problems with having this device inserted inside of a woman’s body and having her scar tissue wrap itself around that nickel and be connected to that nickel constantly. It’s causing-

Papantonio: One problem that most people are aware of when you have and you caught it’s the term is an allergy but what ends up happening when you trigger the autoimmune system like the heavy metals have the ability to do you are able to cause lupus, scleroderma, and a whole host of auto-immune reactions. That’s what we saw with the breast implant cases. That’s what we’ve seen with so many implanted medical devices that women typically end up suffering through these various kinds of diseases. What’s clear to me, Travis is the FDA knows all these and Bayer, I think what you’ll find as you go further into this case, cover it up. There’s no question you’re going to find Bayer covering up some of the truth to the problem here. The FDA knew about it but they allowed it to happen anyway. What’s your take on that?

Travis: That’s correct. I think the FDA certainly knew about it and the company knew about it as well. They knew that the product was comprised of nickel, they knew that if women were not adequately tested for whether or not their body could handle having the device implanted in them that there would be serious repercussions. Unfortunately, this device was approved through something that’s called pre-market approval which is an FDA process that really shields the company who manufacture the device from liability for any harm that their device is causing. When this product first came on the market in 2002 it was approved through FDA’s pre-market approval process and that would, that means-

Papantonio: What that means is they don’t test anything. They don’t have any independent testing, they have to take the word of the people putting it on the market, in this situation Bayer. That’s no protection for the individual.

Travis: That’s correct, and that’s essentially what they did. They took the numbers that the manufacturer had presented to them in the pre-market approval process, they took them at face value, they didn’t really look into them any further as far as the reports of pain that women were indicating in the initial studies when this product was first being looked at by the company. There was plenty of information out there that should have tipped the FDA off that this product was going to be problematic and that it should not have received pre-market approval. Yet, the FDA eventually did grant pre-market approval and we now have this situation where we can tell that these women are being injured by this product but they have very little recourse because the FDA has granted pre-market approval to the Essure.