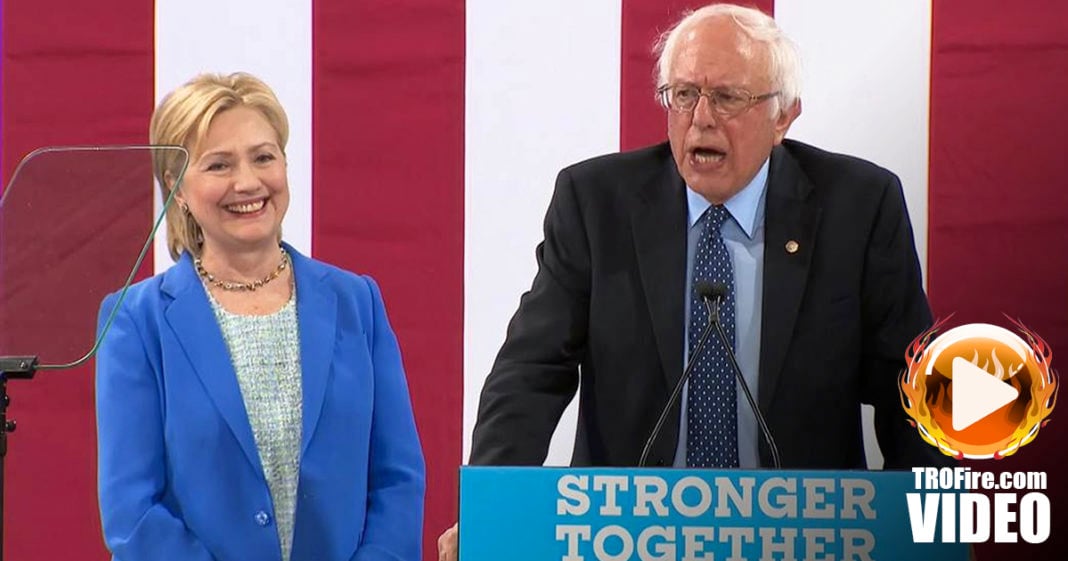 Bernie Sanders has officially endorsed Hillary Clinton for president, but his supporters are less than thrilled about this decision, so will it have any effect on her poll numbers? The Ring of Fire’s Farron Cousins discusses this.

Well, ladies and gentlemen it happened today. Bernie Sanders has officially endorsed Hillary Clinton for president in 2016. This was a moment that a lot of Bernie Sanders supporters, not only did they think it wasn’t going to happen, but they really did not want it to happen. Already during his speech there was huge backlash online, kind of similar to when Elizabeth Warren came out and endorsed Hillary Clinton, the backlash that we saw there. This is a very interesting dynamic, this is an election unlike any that we have seen in modern history. Bernie Sanders had a huge groundswell of support that many people never thought he would get, but now those people who have been energized by the movement are not willing necessarily to follow him and endorse Hillary Clinton. It’s going to be interesting to see if this does help Hillary’s numbers at all, or has that Bernie Sanders movement become its own thing? Is it independent of Bernie Sanders, which it should be, and that’s the point. This movement that Bernie Sanders created was never about Bernie Sanders.

That’s something that a lot of the Bernie Sanders haters didn’t understand. A lot of them said he was staying in the race because of his ego or because he’s all about himself. Bernie Sanders has never been all about himself, so it’s actually a good thing that this movement isn’t necessarily going to follow him blindly. We see too much of that in politics. I’m not saying I agree or disagree with that, I’m just saying that this movement to push the country, not even to the left, but towards a more fair society is a very good thing. Speaking of the numbers, the latest poll show that Hillary Clinton is really struggling to pull in voters aged 18 to 30 which is going to be the largest demographic in this year’s election. Bernie Sanders had overwhelming support from that age group, so it is possible he could bring some of the youth voters into the Hillary Clinton and Democratic Party camp, but if he doesn’t, if this move does not bring those voters in, the Democratic Party itself could be looking at some very serious trouble not just in this year’s election but down the road.

If we don’t bring in new young voters, the party will die. The Republicans are experiencing the same thing, so again very interesting election. I am glad that the movement that Bernie Sanders created is still out there fighting for their beliefs independent of him because that’s exactly what needed to happen, and to be honest, that is what Bernie Sanders wanted to happen.