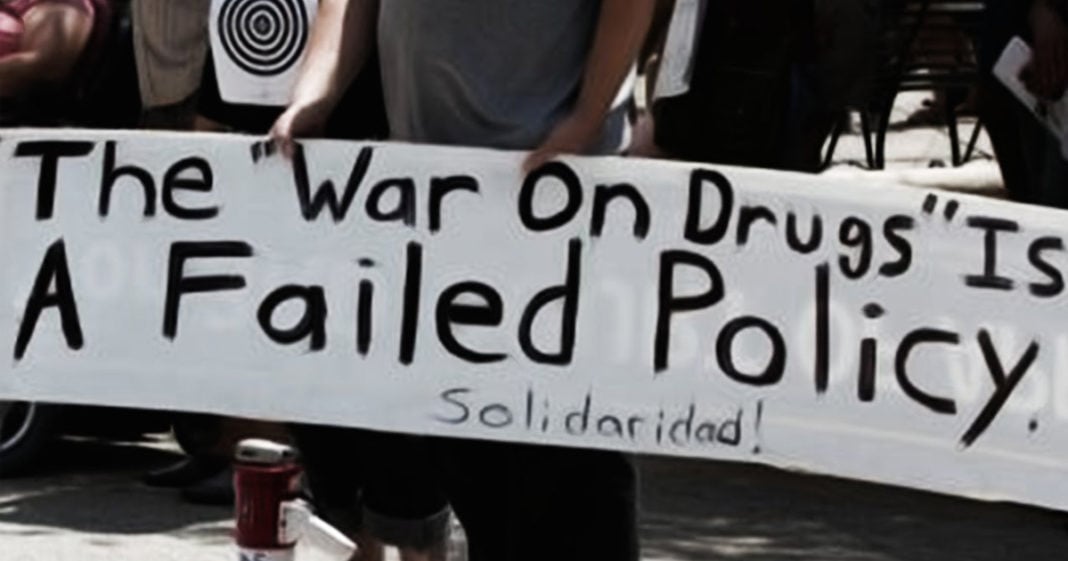 A story appearing in the New York Times Magazine and recently posted at ProPublica brings up a disturbing aspect of the so-called “War on Drugs” that the mainstream corporate media never talks about – and that’s the reliability of drug testing kits.

The story, entitled “Busted,” tells the horrifying story of a Louisiana woman named Amy Albritton who was convicted of drug possession in Houston, Texas in 2010 on the basis of an obsolete $2 field test (today’s field tests are virtually identical to ones used forty years ago), administered by the police officer on the scene. The officer had found a small crumb of a substance he had decided was crack cocaine – and the field test apparently “proved” it.

Ms. Albritton was arrested, processed, and jailed. Despite her insistence that she was innocent, the district attorney pressured her into accepting a plea bargain. She served three weeks of a six-week sentence in the county jail. By the time she had been released, she had lost her job, her home – and had a felony record that would follow her for the rest of her life, preventing her from getting a decent job and another home.

Meanwhile, the sample found in her car that had been the basis of Ms. Albritton’s conviction had not been subjected to any additional testing to confirm the results. Furthermore, the Harris County crime lab was poorly run in a slapdash manner; testing was rife with errors,  and evidence was handled carelessly and even subject to tampering and falsification. Since the 1990s, the Harris County crime lab has been notorious for losing evidence, employing incompetent technicians, and worse. And this plague of incompetence is not limited toTexas, by the way; in 2013, the Boston Globe reported that a lab technician at a Massachusetts drug lab was fabricating results altogether.

The D.A. filed a motion to have the evidence destroyed, but six months later, it was finally re-tested under laboratory conditions.

It turned out to be residue of aspirin and caffeine – the ingredients in a common, over-the-counter analgesic medication, as Ms. Albritton had initially claimed. Her life had been destroyed for nothing, and she is not the only one. According to a recent article in the Washington Post, 73 “drug offenders” in Harris County were found to have been convicted on the basis of faulty evidence over the last two years alone.

So far, nobody at the Houston Police Department has been held accountable. It doesn’t help that drug possession laws in the Lone Star State are nothing short of draconian – even the smallest trace, that at most would rate a misdemeanor charge in other states, can mean years of prison time in Texas.

Even today, there as many as 100,000 alleged drug offenders who continue to rot in prison cells, wrongly convicted on faulty evidence resulting from the administration of  these “field tests.” Almost three-quarters of them didn’t even have drugs in their possession when they were arrested.

Drug field tests are only part of this ongoing fiasco. Research going back five years and more has demonstrated that drug tests across the board produce false positives as much as 10% of the time. Among the substances that can show up as illegal drugs: cold remedies, painkillers, antidepressants, antibiotics, vitamin supplements, snack bars containing hemp seeds, tonic water and even the poppy seeds found on bagels and sandwich buns.

It’s even worse when it comes to those $2 field tests used by Texas police. These tests, which are highly unreliable, are known to identify a plethora of perfectly legal substances as illegal narcotics – including chocolate, spearmint, wheat flour, candy, black tea, deodorants, soap, spearmint, eucalyptus – the list goes on and on.

Some reforms may be on the horizon. In 2013, Harris County D.A. Mike Anderson passed away. Governor Rick Perry then appointed his widow Devon Anderson, a former prosecutor herself, to take over the job. Although she continues to support the state’s policy of filing charges over traces of controlled substances, she rejects guilty pleas from suspects when the evidence has not been thoroughly tested in a crime lab. She’s also softened the hard-line taken by her late husband, suggesting that rehabilitation might be an option and that low-level and first time offenders should not be burdened with felonies on their records.

That’s too little, too late for Amy Albritton and others like her who have had their lives virtually destroyed by felony convictions based on false evidence. Since her arrest, Ms. Albritton’s conviction has been overturned, but that exoneration has yet to be finalized by the trial court. In the meantime, her felony record will continue to hang around her neck like a millstone, hamstringing her ability to get a decent job or find secure housing.

Some victims of these gross miscarriages of justice have been fighting back in civil court, bringing lawsuits against the manufacturers of field drug tests. Three out of four cases filed across the country have been settled. At this point, Ms. Albritton has been in contact with a litigation attorney and is currently considering legal action.