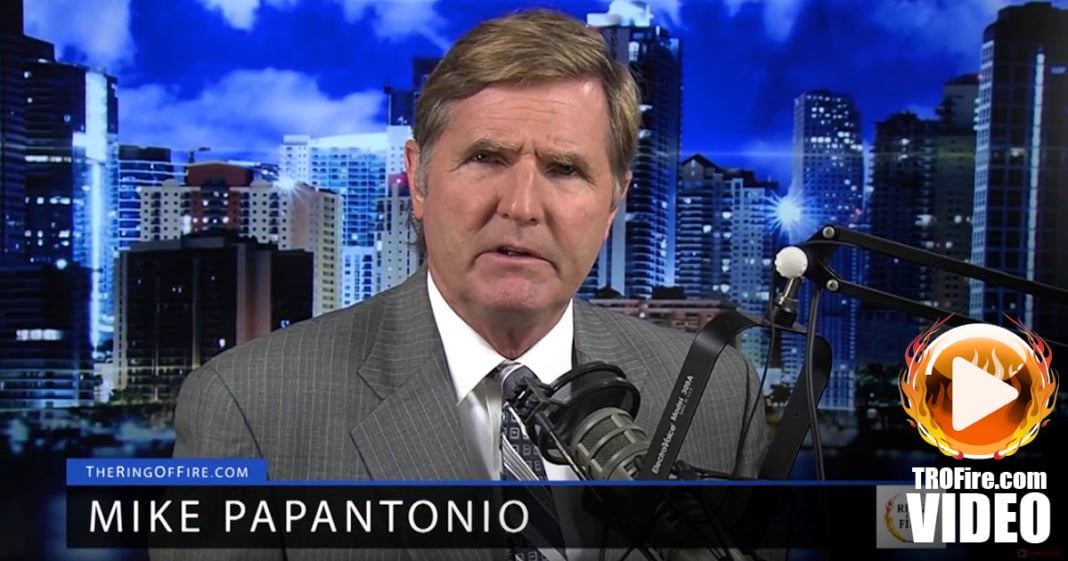 Monsanto’s Roundup has been linked to a myriad of health issues ranging from cancers to neurological defects to infertility. Still, we’re pouring 100 million tons of this toxin into the environment every year. America’s Lawyer Mike Papantonio and Farron Cousins discuss the dangers that Monsanto is hiding from the public.

Mike: Farron, you started your career as a journalist actually working as the editor for a broadly distributed magazine called National Trial Lawyer Magazine. It goes to tens of thousands of attorneys throughout the country. One of the stories that’s emerging out of there is this story about Roundup. The IARC, which is the International Agency for research on cancer, they came out with their latest thought on this. It is that there’s a probable link here between Roundup and cancer. The World Health Organization has determined that there is a probable link. What is that all about? He use a hundred thousand pounds of it every year in the United States, so this is pretty scary stuff.

Farron: Right. The active ingredient in Roundup which is glyphosate is actually what is so problematic, and that is the specific chemical that the IARC is saying is probably carcinogenic to humans because it is causing cancer in lab rats. Glyphosate, as you mentioned, a hundred million pounds used in the United States every year, both industrially and commercially for people using it at their homes. It is hugely dangerous. The cancer part is just one piece of the danger puzzle that glyphosate and Roundup can cause this myriad of health issues.

Mike: Okay, let me back up. Let me walk back on this. The cancer is typically going to be non-Hodgkin’s lymphoma. It’s going to be a blood-borne cancer. The fact is, you always hear industries saying, “Well, oh yeah, the rats died, or the beagles died, or the monkeys died, but that doesn’t mean anything for humans.” That’s why they test lab animals. They test lab animals to see, and they’ve done it for hundreds of years, understanding there’s a relationship between what a chemical does to a rat or a monkey and what it does to a human. Matter of fact, a primate is the most close surrogate to a human being where it comes to those types of test. They’re not killing these animals just for the heck of it. They’re killing these animals to find out what is the relationship between this Roundup product and human beings. The word is not good according to these tests.

Farron: No, this latest round of tests that have come out are just that. They are the latest. We have been seeing results like this for years. We have known that glyphosate is dangerous, almost as dangerous as the chemical that it replaced back in the ’70s, which was DDT. That is why Roundup exists, because they couldn’t use DDT anymore because it was killing people, so Monsanto says, “Okay, we’ll come out with this new chemical, a little bit watered down, but it’s going to do the same thing both to your weeds and to human beings.” Since the 1970s, very few studies have been done, but all of the ones that have been done point to the fact that this glyphosate in Roundup can cause cancer. It can cause neurological defects of all kinds.

Farron: Yeah, it can cause reproductive problems. It can cause infertility. I mean, there is an endless list of the things that glyphosate has been used for, and what’s really scary is that these tests are showing that even if you go and you buy a jug of it at your local big box store, you spray it out in your yard, within thirty minutes it is detectable in the human blood stream, which means it’s already in your body going through it after you’ve gone out in your little home garden and sprayed your weeds. That is how quickly it affects the body.

Mike: Let’s say the obvious. The obvious is this is a chemical that’s designed to kill living cells. We can agree on that, right?

Mike: It’s designed to kill living cells. It’s a chemical that you can take an uptake through inhalation. You can take an uptake through ingestion. You can expose yourself by just skin contact. Now, it’s there to kill cells. Now, the IARC looks at it, the World Health Organization says some of the cells that it kills may be the problem on the mechanism of why it’s causing cancer. Now, the industry comes out and does what the industry always does and said, “Gee whiz.” There’s something called the glyphosate task force, and it looks like it’s a legitimate task force. No, it’s Monsanto. Monsanto is the biggest funder of this entity, that they look like a bunch of scientists that simply are giving their opinion. No, they’re paid for by the very industry that is under criticism here. All of a sudden, we start seeing this big PR push-back. I don’t know if you saw this, Farron, but it was an incredible statement. A Monsanto spokesman comes out in saying, “We’re using this to protect schools.” Did you see that?

Mike: What does that mean? We’re using this weedkiller, this cell-killer to protect schools. From what? Weed?

Farron: I think what he’s very poorly trying to say is, “Look, we’re protecting schools by protecting the food supply from the weeds,” but here’s the problem, is that if you spray Roundup on a plant of any kind, as long as it’s within the size range and dose range, it’s going to die. That includes crops. How does Monsanto overcome this? They create genetically modified organisms that are Roundup-resistant so that now farmers are free to go and spray as much Roundup as they want on these crops to kill the weeds, and that is why the levels of glyphosate that we’re finding in human beings has increased so much. Because of these Roundup-resistant crops, there’s nothing holding farmer and big agriculture back from dumping this by the gallon onto heads of lettuce, or broccoli, or whatever vegetable it is we’re eating that day.

Farron: Overall, the entire chemical cocktail that makes up Roundup, as we hit on earlier, let me go through the list. Here’s is everything we know that is being linked to the chemicals, all of the chemicals in Roundup, ADHD, because these chemicals act as neurological inhibitors, both in children and in fetuses, which means that it affects the way the brain develops. The neurons do not myelinate as they’re supposed to. That also causes autism. It’s been linked to Alzheimer’s Disease, birth defects, brain cancer, breast cancer, other forms of cancer, non-Hodgkin’s lymphoma, celiac disease, gluten intolerance, chronic kidney disease, colitis, depression, diabetes, heart disease, hypothyroidism, inflammatory bowel disease, liver disease, Lou Gehrig’s disease, multiple sclerosis, Parkinson’s disease, and unfortunately I’m out of room to continue the rest of the list here. Those are all things that have been linked by studies to all of the chemicals in Monsanto’s Roundup.

Mike: Okay, now Monsanto, of course, disagrees with all of this.

Mike: They say none of this is true. They say that the IARC was out to lunch. The World Health Organization was out to lunch, that their information does not show what they say it shows. They say that Roundup is completely safe, it can be used by a child, whatever. It can be used in any kind of setting. It has no relationship to non-Hodgkin’s lymphoma, and it’s exactly the type of thing that you would expect. To me, as I look at these studies and I look at the twenty-fold increase in legal residue limits that the EPA is now allowing … Understand the EPA is part of this, too. EPA, no surprise here, is just an extension of whatever the corporation wants to do. In this situation, it happens to be Monsanto. The EPA is nothing more than an extension of Monsanto, and that’s why the EPA every year has increased the acceptable amount of legal residue, such as poison, that can be found on food. They’ve increased that twenty-fold just in the last few years. As we see the industry push back, the way they’re pushing back is a way that we would expect, and that is to get to the regulators, make the regulators do what they want them to do.

Farron: Let me say another thing that’s interesting here, because you and I have spoken a lot about the dangers of pharmaceuticals and the failures of the FDA, but still, when those pharmaceutical commercials come on television, at least there’s a small part of it that is dedicated to telling you that, “Hey, this drug might kill you.” When you see commercials for Monsanto’s Roundup, there is absolutely no warning whatsoever. It’s marketed as safe. It’s environmentally-friendly. It’s biodegradable. All they tell you is how great it is, not the fact that it’s been linked to cancer in every kind of animal that we’ve ever tested it on. That’s a big failure there, too.

Mike: The cases I see coming in to me, our firm, on this, all seem consistent with most of the stuff we’ve just covered. Of course, we always invite Monsanto to come on. If they want to respond to this, they’re welcome to come onto the show and respond in any form or fashion that they want to. We’re going to be talking about this a lot in the weeks to come, because I think this needs a little bit more publicity than what the media is giving it. Obviously the media, corporate media, is not giving this a lot of publicity because, there again, corporate media is paid to advertise for people like Monsanto. They make a lot of money advertising for organizations like Monsanto. They’re welcome to come here any time and respond. They have the floor. Farron, thanks for joining me, okay?

Farron: Thank you very much.