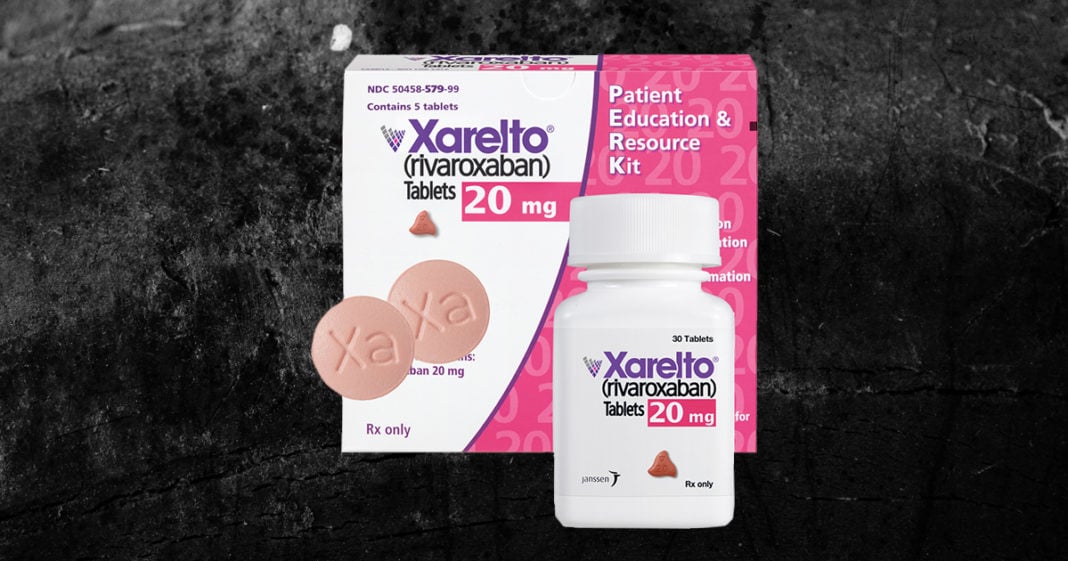 Big Pharma is great at pushing unnecessary drugs onto American consumers. The biggest problem is that many of the industry’s latest blockbuster drugs are less effective and less safe than drugs that have been out for decades. Ring of Fire’s Mike Papantonio talk about one of the latest blockbuster drug failures with attorney Ned McWilliams.

Papantonio: Ned McWilliams, Xarelto the killer drug of the week. When does it stop? This is almost black humor what we see coming out of the FDA nowadays.

McWilliams: It’s just the same story over and over again, unfortunately. Yeah, Xarelto it’s the latest one in this whole line of drugs that it is doing the same thing. Literally, hundreds if not thousands of people believing the death because of the drug.

Papantonio: Okay, lay it out for us. What is the drug, why do people take it, why don’t doctors know that they shouldn’t give it to their patients?

McWilliams: It’s called Xarelto. It’s part of this whole new class of drugs that came out. They are all meant to replace Warfarin and it’s for elderly folks who have atrial fibrillation which is just a heart arrhythmia. The thing is that that’s a very large population. We’re talking about millions of Americans with atrial fibrillation who they’re trying to push these drugs on through all the direct consumer advertising that I’m sure everyone’s seen. What I think people don’t know is that the people that have actually investigated the safety of this drug like the 2 primary doctors at the FDA they actually voted against this drug getting approved. They said it should not get approved. They said it doesn’t look safe. It doesn’t look effective and they gave very good specific reasons and the bureaucrats just vetoed them. Trumped them. They guys over-

Papantonio: Why? We’ve seen so many times with the bureaucrats actually end up working for the industry. In other words, the bureaucrats work in their day 1. Day 2 the industry comes and says “Hey, we’d like to give you a raise of $300,000. Oh, by the way, what about helping us with this drug.” It’s bribery. It’s nothing short of bribery.

McWilliams: I think it’s a bribery. I think it’s a combination of the revolving door you see between industry and the regulators but also the thing that I think you called it the captive agency. We have these agency where they just do not have the power or they are disenamoured by the power of these drug companies. Here we’re talking about Bayer and Johnson and Johnson. Just behemoths. 2 huge drug multimillion dollar drug companies.

Papantonio: On Xarelto, we’re talking about Xarelto here. In Xarelto, you have this huge companies coming in and basically pushing the FDA around holding out these gifts if you would for the FDA types saying you know “I know you’re only making $120,000 come with us and make $300,000 and oh, by the way, can you help us with getting approval on this drug.”

McWilliams: That’s part of it and another part that I think a lot of people don’t understand is the lack of power that the FDA has. They don’t have much power and I actually found a document the other day when I was researching this topic where someone within the FDA wrote and they said look and it’s the core allegation, in this case, is that a simple a blood test could improve patient safety. The FDA says look the data appears to show that a blood test could improve patient safety but for whatever reasons the drug companies aren’t interested in pursuing this avenue and so the FDA acknowledges that they just do not have the power to require the companies to do what the FDA believes is right. Which is just ludicrous.

Papantonio: What are the important points about this Xarelto story that really just causes you to get angry when you know how many people this is killing?

McWilliams: For the start of the matter, we don’t need it. We have a drug that is tried true tested called Warfarin that doctors have been using for 50 years and it’s cheap. It’s 300 bucks a year. These new guys on the market they are selling it to our grandparents and they’re telling it’s cheap and quick and you don’t have to go to the doctor anymore and but they’re charging them $3000 a year for this drug.

Papantonio: Their argument is you don’t have to monitor the blood amount.

McWilliams: Exactly you don’t have to do the regular blood test which is true but the fact of the matter is if you did like simple 1-time blood test or a yearly blood test you could greatly improve patient safety and they know this. There is a recent huge expose in the British medical journal just in the last couple of weeks where they said that the same thing is true for another 1 of the drugs in the class and so there is no-

Papantonio: Wait wait when you say drugs in the class what do you mean? There is a class of drugs that you’re talking about here. It’s not just Xarelto. It’s other ones too.

McWilliams: It’s Xarelto and Eliquis and there is a new one that’s coming down the pike. I don’t know the trade name of that yet. I think it’s called Endoxipan is its generic name.

Papantonio: Okay but we’re talking about Xarelto here and the FDA is doing what with Xarelto? Are they doing anything to stop this?

McWilliams: Absolutely nothing and they’re going to get into it. They’re going to dive in. Their market share is going up. People have been paying more attention to it. I know that there is a lot more attention to the whole class of drugs in general. I think eventually we’re going to get to a place and a point in time where all these drugs require at least a 1-time blood test just to make sure you’re getting the right dose and that’s going to happen. I think some other concerning things about Xarelto is again if you dive into the data is that the way you measure how well this drug performs is you do a head to head clinical trial. Which is what they did here with Xarelto.

They compared it to Warfarin but the thing about Warfarin is that it requires you have to constantly change the dose and you can measure how well you do that and they did it very poorly. They managed Warfarin very very poorly and yet Xarelto still had more strokes and more bleeds than Warfarin. Even in poorly controlled Warfarin and that’s another one of the reasons why the people of the FDA voted against approving the drug. The actual scientists, the doctors but the bureaucrats again overruled them.

Papantonio: Obviously, if somebody is on Xarelto right now the doctor most of the time is not going to know a lot of these issues we’re talking about. That sounds odd but the doctor really won’t even know that maybe the clinicals aren’t quite right or why the clinicals are actually showing or maybe they shouldn’t be on this drug at all because there is something called direct to consumer marketing explaining that would you?

McWilliams: Yeah, the thing is there is market research that shows that 9 out of 10 doctors will prescribe a drug to a patient if that patient asks for it by name. That’s why in the United States drug companies pharmaceutical companies spend tens if not hundreds of millions of dollars on direct to consumer advertising. Which is really just it’s crazy that why would you be advertising to patients when the patients don’t have the power, the ability to actually write these prescriptions. It’s the doctor’s choice, it’s the doctors decision yet they know the influence they have through these patients and the doctors just don’t have the time to do all the research and they ultimately just have to trust the FDA and their peers and the drug companies that they’re giving them safe medicine.

Learn more about the dangers of Xarelto at DrugSafetyNews.com.