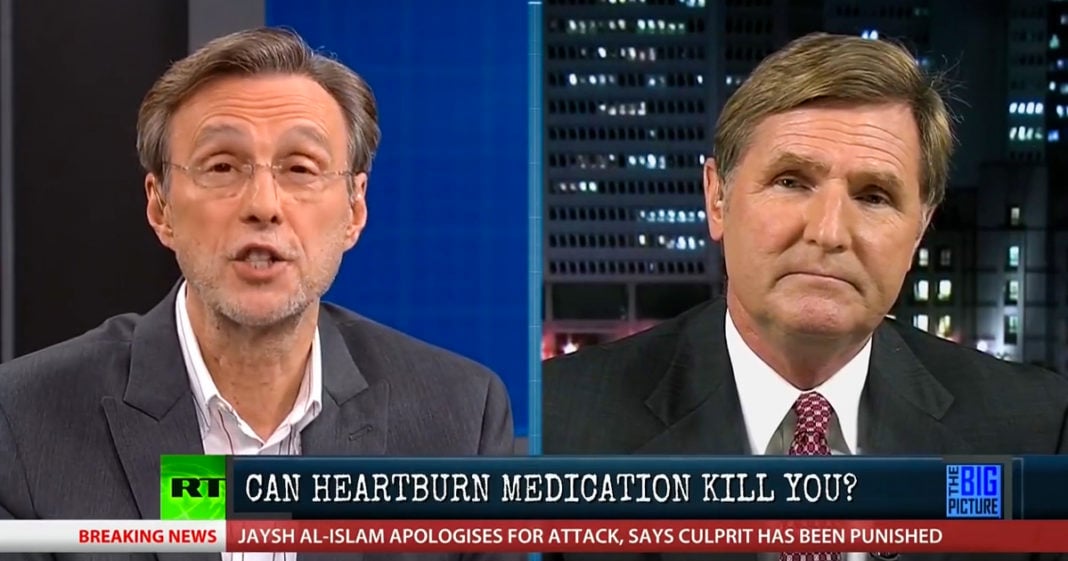 Thom: I understand you’re working on a new legal project regarding heartburn medication, something that is probably near and dear to at least ten or twenty percent of Americans. Can you tell us about it?

Mike: Yeah, it’s an important case, Thom, because you have … It’s Nexium and Prilosec … It’s what they either call proton pump inhibitors. The reason this is such an important story is because so many people are taking this product, and it causes kidney failure. The studies coming out are pointing towards kidney failure, cardiac failure, magnesium depletion, which leads to bone deterioration. It’s this whole list of things that the FDA should have known about, failed to do anything about … They’ve had warnings about this now for about, easily five years, closer to six years, where they’ve seen all of this coming.

This something you can buy over the counter. There’s no warning about any of this at all. The AstraZeneca is the company that produces this product. They have their share of legal problems already, legal problems with doing things and misrepresentation of the truth about the product they were selling, working out sweetheart deals with doctors to promote their product … They’ve got a whole history that they have to deal with up front, but the most important part of their history is the way they’ve kept this from people, the truth from people.

Seventy-five percent, Thom, seventy-five percent of the people who take these products do not even need them, and the worst part about it, once they start taking them, their system becomes dependent on it, and if they don’t have the esophageal reflux or if they don’t have gastric problems to begin with, after they take this product for a little while, they now have the problem. This is an awful, awful development as far as a product goes. We deal with a lot of pharmaceutical cases. The worst thing about this is it’s so … The use of this product is so vast.

Mike: Yeah, the way they do it is people believe that the FDA looks at this stuff. Honestly, if you ask ten people, “Does the FDA really look at the testing? Do they do the testing themselves?” Those ten people will say, “Of course they do!” Well, they don’t. They rely entirely on what’s represented to them by the company that’s selling the product. Early on, the FDA had all the information that they needed to understand that the proton pump inhibitors, as a class, whether it’s Prilosec, Prevacid, several of them, Nexium, several of these products, they started seeing the same problems. They started seeing people with broken bones because of magnesium depletion, they started seeing the connection between cardiac events and this product, they started seeing people actually getting worse, where they had gastral, intestinal problems that became worse in taking this product, because their system became dependent on it.

Do not take this product. Less than twenty-five percent, Thom, of the people taking it, maybe twenty-five percent, really fall under the class that might be able to take it occasionally, and maybe they need it occasionally, but this case, you’re going to see, is going to develop really quickly because it’s so … The use of this is so broad and the media has done nothing to tell this story because the blue pill, the big advertisement of the blue pill, they make a lot of money advertising for companies like AstraZeneca for product like Nexium.

Thom: Wow, wow. Mike, that’s astonishing. I know so many people who take those things. Mike Papantonio, thank you so much for being with us tonight.

Learn more about the dangers of Nexium and Prilosec here.