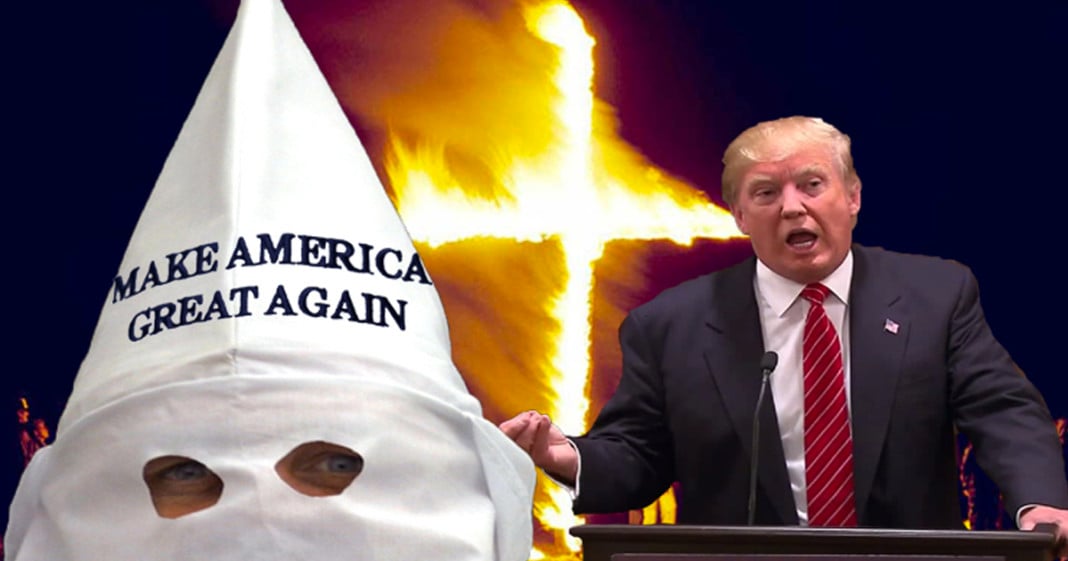 Like the Black Plague that wiped out one-third of Europe’s population in the 1340s, then returned again and again for the next five hundred years, the Ku Klux Klan is making a comeback – or at least, it hopes to.

Fueled by the current wave of xenophobia that seems to be sweeping the globe these days (and fueled in the U.S. by the rhetoric of Donald Trump and his followers), the virulently racist organization that was born in the wake of the American Civil War is growing after a long decline.

The history of the KKK is well-documented, but for those who may have forgotten their high school history courses, here’s a brief recap:

The organization known as the Ku Klux Klan was founded in Tennessee in late 1865 by a small number of disaffected Confederate Army veterans. Starting out as a social club, the group gradually morphed into an extremist organization bent on terrorizing newly-freed African-Americans and overthrowing Reconstructionist state governments throughout the former Confederacy.

It didn’t last long; their activities drew the scrutiny of the U.S. federal government, which passed a series of “Enforcement Acts” in 1870. This backlash, combined with what historian George C. Rable describes as a “lack of central organization and the failure of its leaders to control criminal elements and sadists,” lead to the KKK’s swift decline.

The group came back to life less than 45 years later, when In 1915, the KKK was re-established in Atlanta, Georgia. During a time when there was a major influx of immigrants from Eastern and Southern Europe, the second KKK used a highly structured organization to recruit members across the nation, even reaching its tentacles into Canada. At its height in the mid-1920s, the KKK boasted between four and five million members.

Despite its better organization and efforts to co-opt “Christian” values and preaching “100% Americanism,” internal power struggles and criminal activities among the leadership lead yet again to a decline. By 1930, only about 30,000 members remained, and the group was virtually extinct by the eve of World War II. Likely influencing this decline was the power of the war and the “common enemy” national feeling.

The KKK rose again in 1950 in response to the growing African-American Civil Rights Movement and the “Red Scare.” Over the next two decades, the KKK engaged in a concerted campaign of violence and terror against black Americans and their white civil rights supporters.

The most notorious incident was the bombing of the 16th Street Baptist Church in Birmingham, Alabama, in which four young black girls were killed. However, there were at least two dozen racially-motivated murders and bombings between 1950 and 1968. Although Klan activity and membership once again declined in the 1970s, violent activity continued throughout the decade. By 1980, the FBI had managed to infiltrate the organization. A number of civil lawsuits were filed by the Southern Poverty Law Center, forcing the Klan to put more of its resources into legal battles.

The advent of the Internet Age gave white supremacists a new tool with which to connect. In 1995, white nationalist Donald Black established Stormfront, an online meeting place for white racists of all stripes, including Neo-Nazis, “Skinheads,” and the Aryan Nation. In 1998, Black told the Miami New Times that “a multicultural Yugoslav nation can’t hold up for too long. Whites won’t have any choice but to take military action. It’s our children whose interests we have to defend.”

And this time, it’s not just dark-skinned people and civil rights supporters they’re coming after. According to Keith Akins, writing in the Law Enforcement Executive Forum, “Klan literature and propaganda is rabidly homophobic and encourages violence against gays and lesbians.” He points out that “Since the late 1970s, the Klan has increasingly focused its ire on this previously ignored population.”

Publicly of course, current KKK leaders do not advocate violence. Instead, the organization is focused on creating an atmosphere of fear and paranoia that encourages other like-minded individuals to engage in acts of violence – in essence, doing their dirty work for them.

If there is any silver lining here, it lies in the fact that today’s Klan is far from unified. It is largely made up of small, localized, independent groups that are frequently at odds over whether to ally themselves with other white supremacist groups, appear in public, and allow women to be involved in their activities (the KKK has traditionally been highly patriarchal in its worldview). Nonetheless, leaders claim their members are growing.

Still, according to the SPLC, current membership nationwide does not exceed more than 6,000. Mark Potok, Senior Fellow at the SPLC and a leading expert on extremist groups, says, “The idea of unifying the Klan like it was in the 1920s is a persistent dream…but it’s not happening.”

Even a small venomous snake can be dangerous, however. Potok warns that while today’s KKK is not as violent as it was fifty years ago,  “it is [not] some benign group that does not engage in political violence.” And he is right. Presently, the modern incarnation of the KKK appears to be nothing more than a small group of racist loudmouths.

But let us not forget what happened in an insignificant beer hall in Munich, Germany in 1923 – and what that seemingly minor incident led to a dozen years later.