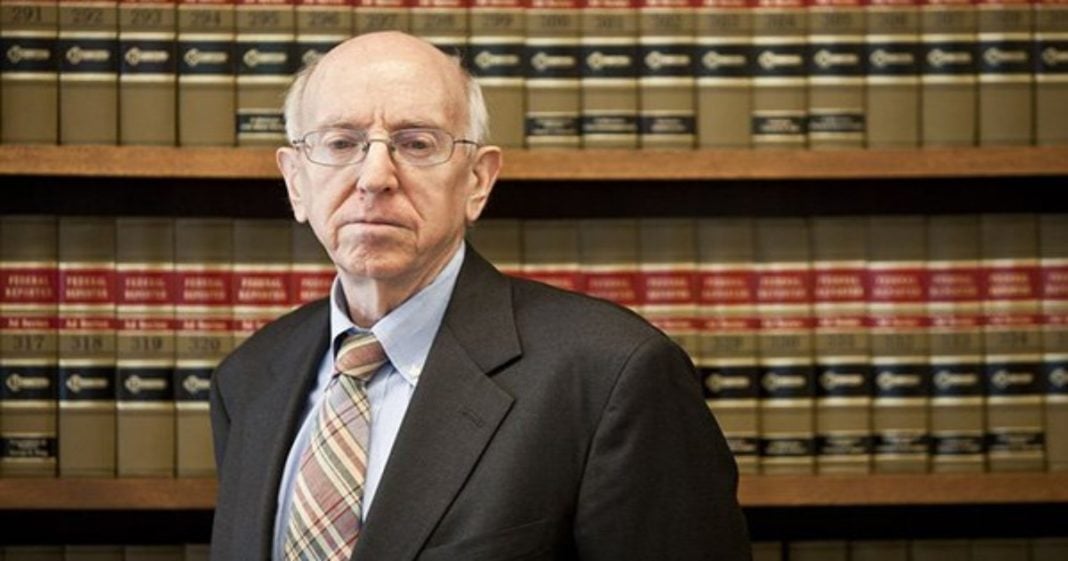 In an opinion piece published this week on Slate.com, Judge Richard Posner of the Seventh Circuit dismissed the United States Constitution – the very basis of this country’s legal system – as  irrelevant and out of date.

He sees “absolutely no value to a judge of spending decades, years, months, weeks, day, hours, minutes, or seconds studying the Constitution, the history of its enactment, its amendments, and its implementation.”

Did Judge Posner actually go to law school? A statement like this suggests that if he did, he slept through most of his basic classes. He supports his argument by stating that “Eighteenth-century guys, however smart, could not foresee the culture, technology, etc., of the 21st century.”

Ergo, Posner writes, “the original Constitution, the Bill of Rights, and the post-Civil War amendments (including the 14th), do not speak to today.”

The 14th Amendment addresses equal protection under the law – and it’s no secret that many right-wing politicians would like to see that abandoned altogether. And the first ten amendments that make up the Bill of Rights are often seen as dangerously radical ideas by those same ignoramuses and the uneducated masses that blindly follow them (which is strange, since they’re always going on and on about the Constitution).

Posner, who was considered a liberal in his younger days, indeed maintains some progressive views today. In 2014, he wrote the opinions in cases challenging the legality of same-sex marriage, calling bans on such unions as representative of “a tradition of hate [and] savage discrimination.” A bit of irony, here; in his opinion, he indicated that laws against same-sex marriage were unconstitutional under the 14th Amendment – which, along with others, he considers irrelevant in today’s world.

Historically, Posner has also been against the so-called “War on Drugs,” calling it “quixotic.” In 2012, he said:

“I don’t think that we should have a fraction of the drug laws that we have…it’s really absurd to be criminalizing possession or use or distribution.”

On the other hand, Posner believes that privacy rights are “over-rated.” At a conference held at Georgetown University in November 2014, he said, “If the NSA wants to vacuum all the trillions of bits of information that are crawling through the electronic worldwide networks, I think that’s fine…much of what passes for the name of privacy is really just trying to conceal the disreputable parts of your conduct.”  On the other hand, he has a problem with people who want to record the actions of police officers in public:

“Once all this stuff can be recorded, there’s going to be a lot more of this snooping around by reporters and bloggers.”

Some of his views on public education smack of overt racism. In September 2012, Posner wrote the following blog post:

“The average white IQ is of course 100 and the Asian (like the Jewish) almost one standard deviation higher, that is, 115. The average black IQ is 85…and the average Hispanic IQ has been estimated recently at 89.”

But where does he come up with the idea that the Constitution is irrelevant and dated? He’s correct about one thing: the Framers, living in the latter part of the 18th Century, could not have predicted the  changes in technology and society that have been coming at an increasingly accelerated rate since the advent of industrialism.

That is exactly why the Constitution was constructed to be an “elastic” document that could be changed with the times. They may not have been able to know what changes would occur in future decades and centuries, but they knew those changes would most certainly take place. It is why our system has the amendment process.

But apparently, Judge Posner doesn’t care about that.

In his dismissal of the very foundation of U.S. law, he is not only showing his willful ignorance – he is also disregarding the oath he swore when appointed judge to defend and uphold that same document.