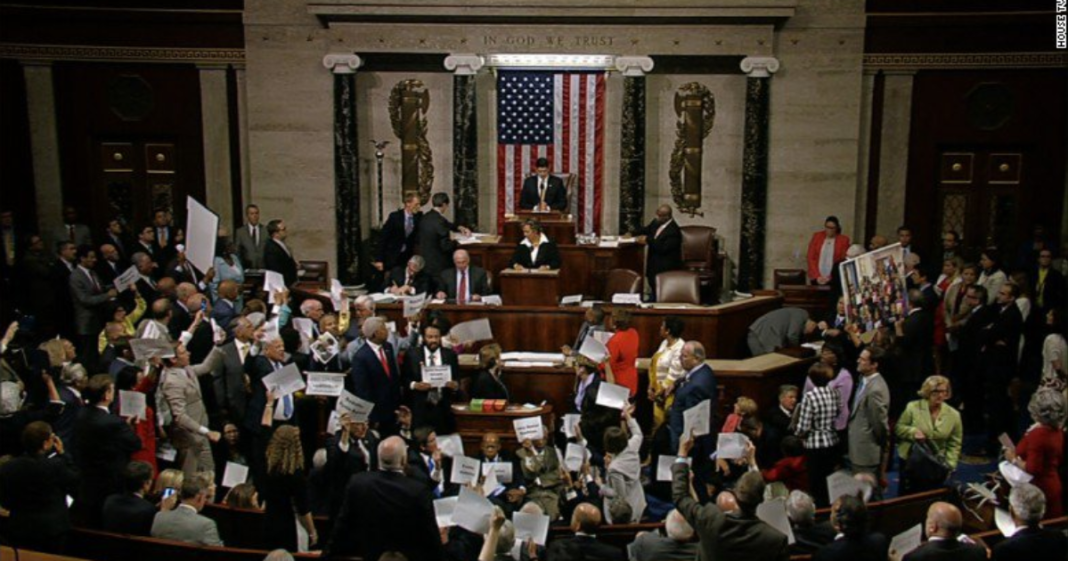 In an unprecedented sit-in which has lasted nearly 24 hours now, House Democrats have refused to leave the floor of the House in order to demand a vote on gun reform.

Led by former civil rights leader John Lewis and others, the take-over of the House began at around 11 a.m. on Wednesday and lasted through Wednesday night and into this morning.

House Republicans have done their best to put the sit-in to an end, with Speaker Paul Ryan cutting the video and audio feed to the House when in recess.

Senate Democrats made appearances throughout the evening including Senator Elizabeth Warren and Senator Bernie Sanders. Overnight, crowds assembled outside on the lawn to show their support for the lawmakers inside.

Despite going into recess again and again on Wednesday, near 10 p.m., Speaker Ryan forced the House to vote on unrelated bills and then sent the House into its planned break. Though House Republicans aren’t expected to return until July 5, House Democrats continue to occupy the building with no plans to leave.

Members of the House brought pillows and blankets and supporters ordered hundreds of dollars worth of pizza and doughnuts to feed the lawmakers.

Even now, representatives take the floor to speak to the assembled, and Senate Democrats appeared during the night to show their support. The faces of the 49 who died in Orlando stand behind the podium and House members hold up signs with victims names.

Though there are some legitimate criticisms of the bill House Democrats are proposing, it is so heartening to see our lawmakers standing up (or rather sitting in) to do something, anything, to try to prevent another Orlando.

You can watch the live feed from C-SPAN here.