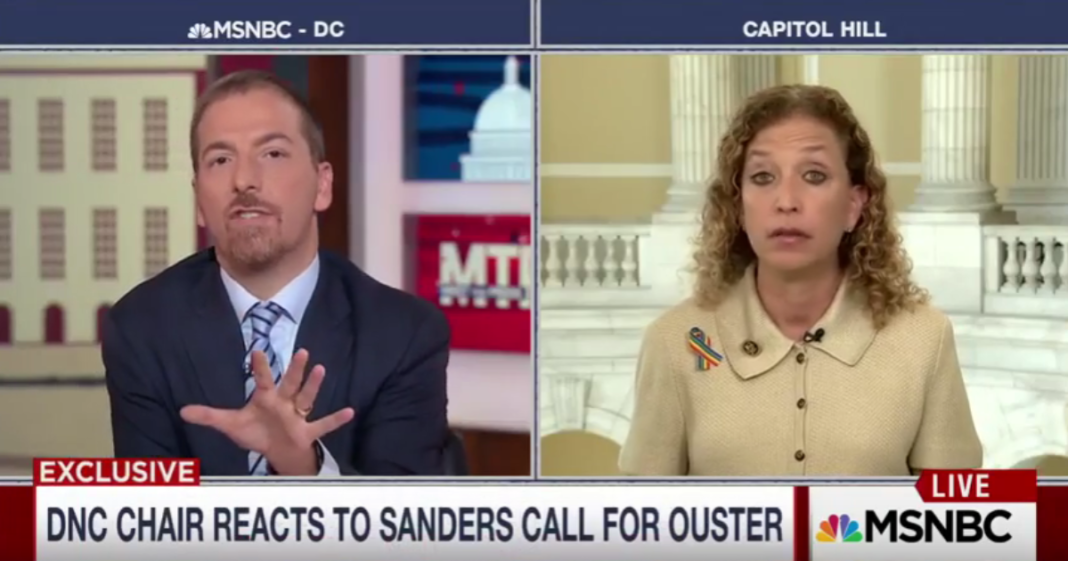 Whether she likes it or not, Bernie Sanders is not yet done with DNC chair Debbie Wasserman Shultz.

On Tuesday, while making a long list of bargaining chips for the Democratic party, the Senator called for the ouster of Wasserman Schultz and other party leaders. Sanders cited the removal of DNC leadership as one of the many progressive steps forward the party must take.

Wasserman Schultz was asked about these remarks on Tuesday evening by MSNBC‘s Chuck Todd. Todd, who is usually pretty softball when it comes to asking the important questions earned a bit of credit when he asked Wasserman Shultz outright if she would be willing to step down if she becomes the main bargaining chip in winning the general election support of Sanders.

Rather than actually addressing how she felt about the comments made by Sanders, or answering whether or not she would ever consider stepping down, Little Debbie did what she does best: Ignored the question.

Yes, just like the way she has repeatedly refused to say if she would debate her Congressional primary opponent Tim Canova or even acknowledge his existence, Debbie tried to ignore the reality of Sanders’ biting criticism.

Wasserman Schultz knows that she is circling the drain, so she attempted to capitalize on the fear of Donald Trump in order to corral Democrats into forgetting about her corruption in order to “unite” and not criticize the mechanics of the party.

Forget it, Wasserman Schultz seems to say to us. But we won’t – and we won’t be happy until we see the back of her crunchy hairstyle disappearing over the horizon.

The segment about Sanders begins at around the 5-minute mark.