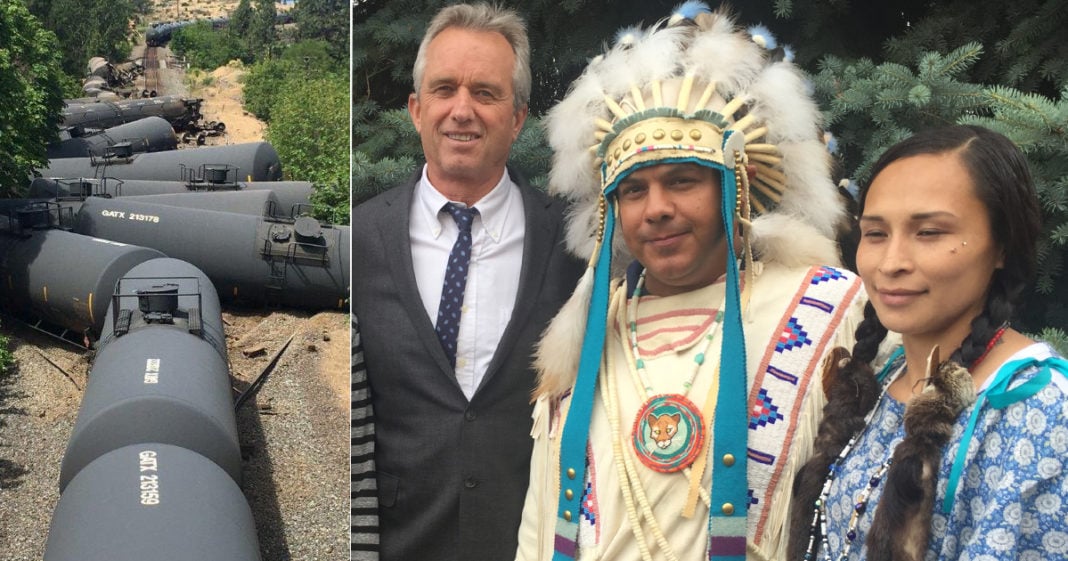 Earlier this week, Ring of Fire host and activist Robert F. Kennedy, Jr. took a trip to Oregon to look into the horrific phenomenon of bomb trains.

Many have begun to refer to the trains in the northwestern United States which are used to transport oil as “bomb trains” due to the tragic and volatile reactions that can occur if the train derails.

All year-round, trains criss-cross the American countryside transporting millions of gallons of crude oil. Just one slip up and the train carrying fuel is instantly turned into a massively dangerous bomb. That is exactly what nearly happened in the town Kennedy visited this week as his own niece was in a playground near where a train derailed just 300 feet away.

“I’m up in Oregon with the Yakima fighting the bombtrains. This one derailed 300 feet from middle school where my 14 year old niece Kate Skakel is student president. She was in the playground when the train exploded. The Fire Chief told me that it was one of the few calm days of the year. If the wind had been blowing, the town would have been incinerated.”

Kennedy participated in a press conference alongside the organization Columbia Riverkeepers as well as local Chiefs of the Yakima nation. The conference called for a ban on the transportation of fossil fuels in the northwest.

Though this derailed train was not one of the dreaded bomb trains, it easily could have been and the effects would have been devastating. Though it didn’t explode, the oil spilled from the derailed train has now contaminated a local salmon run in the Columbia which is located in the Yakima nation.

These so-called bomb trains are truly a disaster waiting to happen and we need to encourage national media attention toward this worthy cause. Kennedy’s increased visibility of the issue along with the organizations and Yakima nation’s involvement is a great step in the right direction.

We must prevent this tragedy before it happens.