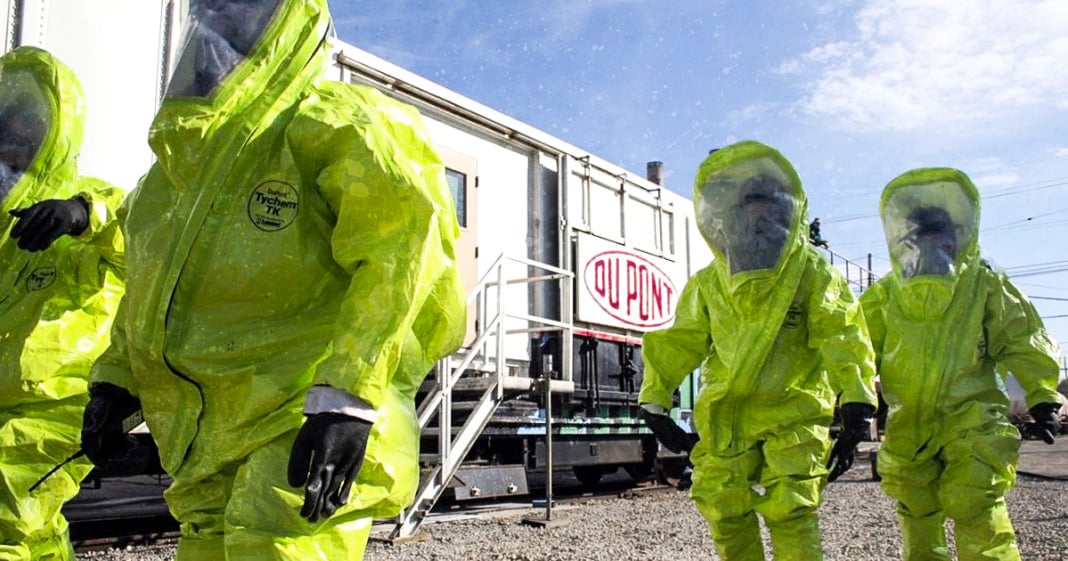 A historic trial is taking place against massive corporation DuPont for their criminal-level misuse of a cancer-causing chemical. Most Americans, however, have no idea about the battle waging on their behalf in an Ohio courtroom.

Corporate giant DuPont is currently being pursued in litigation over whether or not their mishandling of a chemical called C-8 caused cancer as well as substantial emotional distress for one man and his family.

For those unfamiliar with C-8, here is a quick summary:

The result, if proven, was that men like the plaintiff in this case were diagnosed with cancer due to their exposure. Studies show that C-8 can cause cancer as well as IBD and ulcerative colitis.

Lead attorney on the case, America’s Lawyer™ Mike Papantonio, addressed the court on Friday with his opening statement against DuPont, telling the jury that just like a man who knowingly poisons another, it is the jury’s job to decide whether or not DuPont should be held responsible for poisoning Ohioans.

They mean the same kind of poison, ladies and gentlemen, that nobody would expose their family to. That’s the kind of poison they describe is this product, C-8. These aren’t my words. These are their words.”

Papantonio argues that “there was no big secret here” about whether or not executives at DuPont knew about C-8 and its dangers, showing the timeline of when executives learned of the biopersistence quality of the chemical and when they learned about the dangerous effects on the body.

Papantonio notes that the company was so intimately aware of the dangers that they made employees wear special protective clothing and told employees at the Ohio factory that they should not donate blood, worried that the contamination of C-8 in the blood could be spread.

Despite the fact that the company became intimately aware of the fact that C-8 caused cancer, and even labeled it with a cancer warning, they refused to properly dispose of it. Instead, they increased the quantities they dumped in the river many-fold as a cost-saving measure.

Papantonio told the jury that DuPont knew about the dangers of their chemical – knew, for example that it could cause the testicular cancer like that which the plaintiff suffered from,  and they had many opportunities to stop the dumping long before the man had drank a drop of tainted water from the Ohio river.

“They got a chance to pull the plug. They know they can pull the plug at any time. He hasn’t even moved into the zone of danger.”

The case is still ongoing, but if DuPont is held responsible, it could be a landmark case against the company that has put millions in acute danger for decades. DuPont appears to have been placing profit and company reputation over the health and well-being of innocent Americans everywhere, and the chickens are coming home to roost.