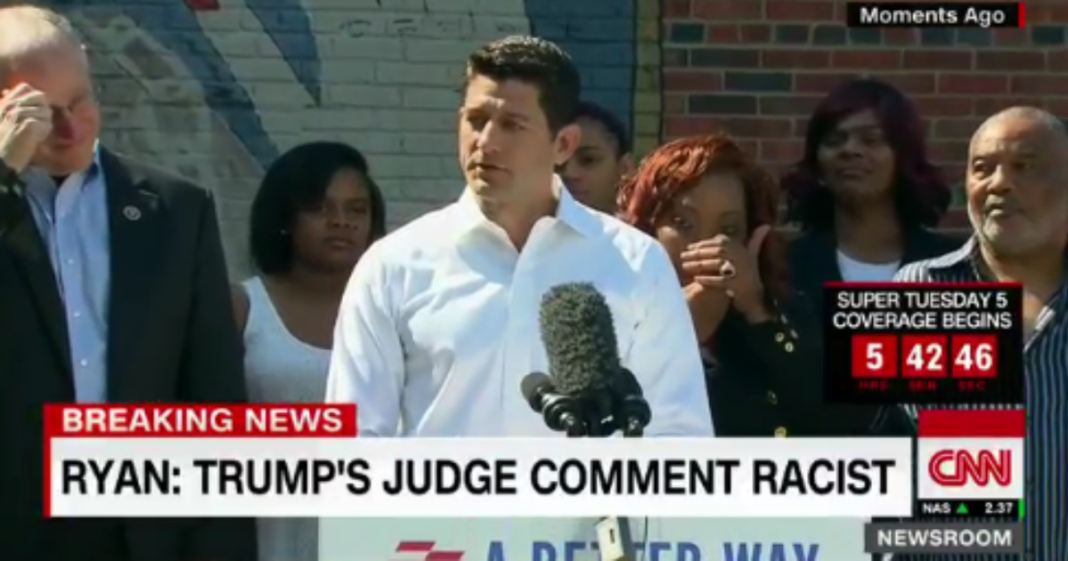 If he wasn’t such a hard-line Republican, one might find it in one’s heart to pity Republican speaker Paul Ryan as he struggles each moment to maintain his endorsement of Donald Trump.

Mere moments after Ryan reluctantly put forth his official supportive statement for the Republican nominee, Trump made him regret it by embroiling himself in a ridiculous defense of his failed scam school, Trump University, managing to make a blatantly racist comment about the ethnicity of the judge presiding over the case.

Paul and other establishment Republicans have been forced to make a choice each day as reporters question them about the latest Trump blunder, and one by one, they have continued to say, “I support the Republican nominee.”

But with this latest comment from Trump about the judge in his case, most of the well-known figures of the Republican party have choked on that support.

On Tuesday, Ryan responded to the comments, saying that what Trump said was “indefensible” and the “textbook definition of a racist comment.” Ryan said that he disavowed the comments, but that he certainly didn’t think Hillary Clinton should be president.

Despite his strong stance, none of those hard words indicated that Ryan was rescinding his endorsement, so the Trump train will inevitably chug on, with Ryan holding onto the caboose for dear life.

Ryan on Trump: Claiming someone can’t do their job bc of their race is “the textbook definition of a racist comment” https://t.co/kE1c7nFQ1C