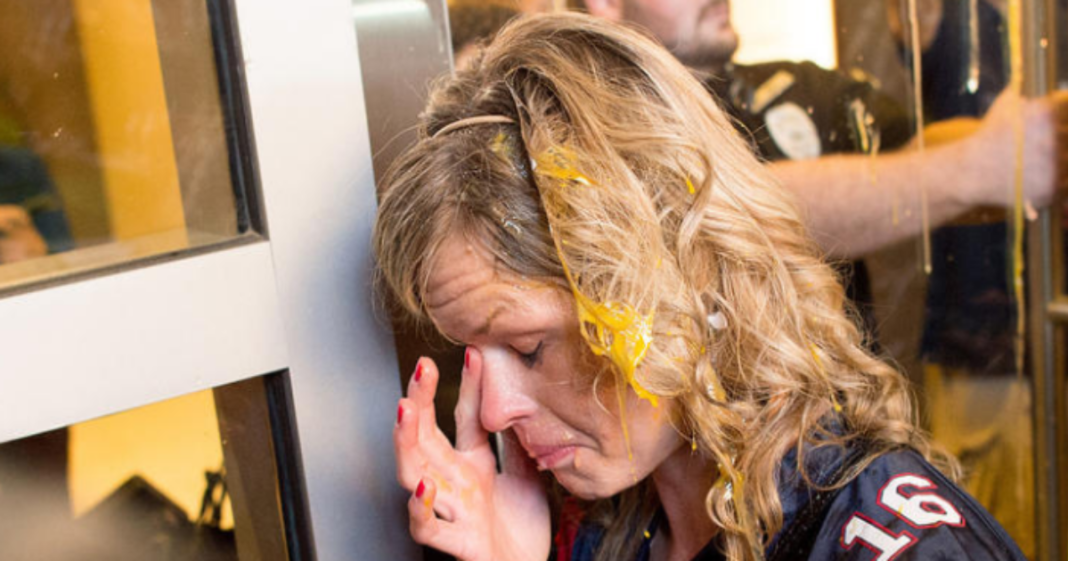 On Thursday evening, a Donald Trump rally in San Jose, California became terribly violent – not entirely unexpected given the history of Trump events. But this act of violence was particularly alarming as it was perpetrated by anti-Trump protesters rather than Trump supporters as usual.

The protesters appeared to be mostly anti-Trump but several were also recorded shouting “Bernie,” indicating their support for the Democratic candidate.

Among the acts of violence was a woman wearing a Trump jersey who was verbally assaulted and pelted with an egg, water balloons, and other food items.

Watch: The moment a Trump supporter, surrounded by protesters, is egged in the face, hit by other food. pic.twitter.com/qYFdwJWvrS

Elsewhere, a Trump supporter leaving the rally was attacked by the roaming mob. The attack left him with a gash in his head which bled heavily.

It’s incredibly disappointing that these individuals chose to act so violently to a group of innocent people. Disagreeing and opposing Donald Trump is a rational train of thought in 2016 but there is absolutely no justification in attacking Americans attempting to attend a political rally. There is no justification in pelting a woman with eggs or attacking a man who is walking away.

This needs to be addressed by the Bernie Sanders campaign considering his name was brought into the protest by some supporters, and this violence must be condemned by all.

This is not okay and we can not (and will not) suspend our beliefs in a free and fair Democracy simply because we believe the candidate is a bad man.