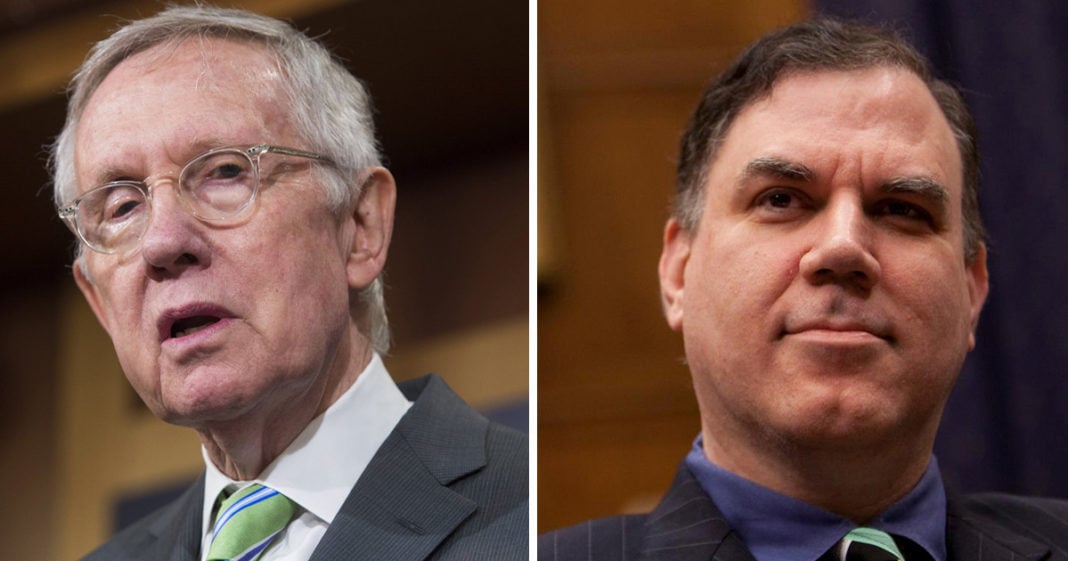 When the Congressional Progressive Caucus got a rare opportunity to sit down with Senate minority leader Harry Reid on Wednesday afternoon, they all flocked to thank him for his service and gave the man a standing ovation as he entered the room.

All stood, except for Rep. Alan Grayson.

Florida Congressman Alan Grayson declined the ceremony to instead jump on the opportunity to call out the party head and ask him to face up to the baseless accusations he had made against the Senate candidate.

Grayson, who is running for Senator in Florida, confronted Reid to ask him why the minority leader had repeatedly called for Grayson’s removal from the race.

“I want to read the things he has said about me.”

Grayson brought up allegations that have been made against him concerning a hedge fund in the Cayman Islands.

“These are false, and I want to know why you said it.”

Reid, clearly offended at being questioned by one of his own replied,

It is clear that Reid’s vehement opposition to Grayson comes from the same part of his brain which made the minority leader express similar sentiments about Senator Bernie Sanders. Reid has a major problem with sticking his opinions where they don’t belong, particularly when it comes to progressive, insurgent Democrats.

Much like Sanders, Grayson has been on the progressive side of most Democratic issues, telling it like it is and refusing to bow down to the establishment D.C. bubble. His punishment for his anti-establishment point of view has been a total and complete exile from the party.

Grayson responded to the comments made by Reid:

“He said he said it because he wants me to lose. It didn’t seem to matter at all to him that it was false, which is rather unnerving . . . He couldn’t come up with anything at all to justify what he had said about me.”

Of course, Reid couldn’t justify his comments because his justification comes from the dark back-rooms of Democratic establishment.

Grayson’s Democratic opponent representative Patrick Murphy (D) has received millions in campaign contributions from Wall Street, much like presidential candidate Hillary Clinton. Reid’s actions work to protect the interests of the party’s chosen candidate in Murphy and work to undermine the legitimate advocacy of Grayson’s campaign.

Just like many other issues in American politics, following the money trail will so often lead you to the true motivation for what seems to be a purely emotional attack. Grayson’s head-on conflict with Reid may have ruffled the establishment feathers, but it revealed that Reid’s establishment ties run deep. So deep in fact, that it seeks to bury a legitimate, progressive Senate candidate.