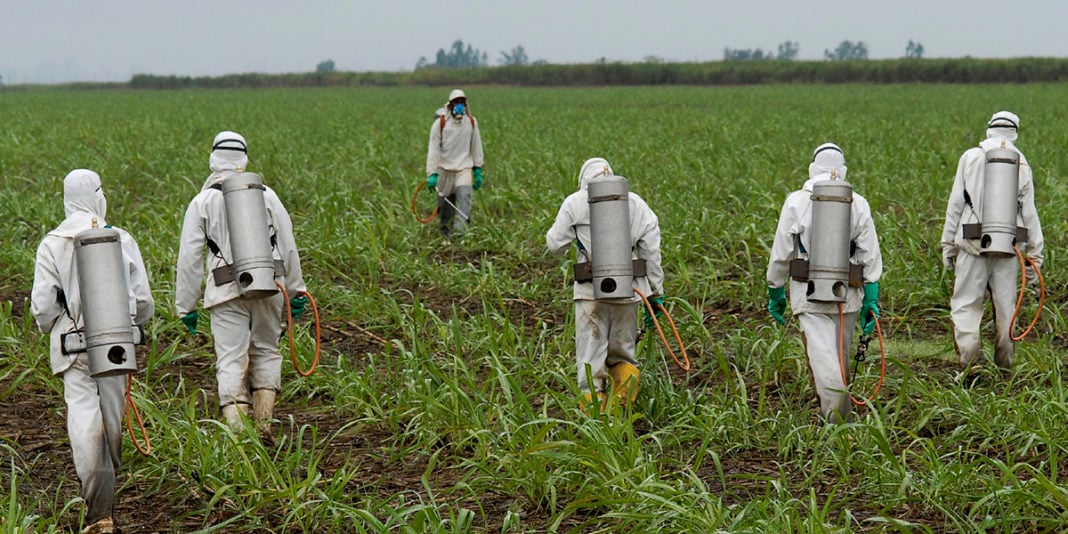 Biostitutes for corporate person Monsanto are managing to convince officials on both sides of the Atlantic that their glyphosate-containing herbicide is “perfectly safe” for human consumption (though apparently not for themselves, however).  Meanwhile, the natural people who are being exposed to glyphosate at every turn are not taking it lying down.

Despite the fact that an overwhelming number of Europeans support a ban on the use of glyphosate-based weed killers such as Roundup®, the EU parliament recently passed a “non-binding resolution”, giving Monsanto’s flagship product market approval for an additional seven years. Although it is less than Monsanto had asked for, a spokesperson is hopeful that the license will be extended come June. Ursula Lüttmer-Ouazane said, “We welcome that the European Parliament has always voted for the renewal of the authorization.” She adds that “Due to positive safety assessments…an extension for another fifteen years should technically not pose any problems” (emphasis added).

What “positive safety assessments” is she talking about?

Last year, the U.S. Environmental Protection Agency (EPA) published a statement declaring there was “no convincing evidence” that the active ingredient in Roundup© has any effect on the human endocrine system. Endocrine disruptors (chemicals that interfere with hormones) have long been known to increase susceptibility to certain types of cancer – but according to 32 different scientific studies, the public has nothing to fear from the most heavily used herbicide on the planet. Writing on Monsanto’s website, Dr. Steven Levine, a Senior Science Fellow at the company, wrote,

This assessment should give farmers, consumers and other users of glyphosate added assurance about the safety of this important pesticide product…I was happy to see that the safety profile of one of our products was upheld by an independent regulatory agency.

Aye, but here’s the rub: of the 32 studies used to evaluate glysophate’s health effects, only five were independently funded. The other 27 were either bought and paid for by the industry, or carried out by scientists whose paychecks are issued by those same manufacturers. This includes Corporate Person Monsanto, whose money-backed voice speaks louder than the millions of natural humans across the globe calling for a ban on the herbicide.

Not surprisingly, most of these studies were not readily available to the public.  In fact, the EPA removed its own report on Roundup® from the Web just last week. Even before that, however, the studies themselves could only be obtained by filing a formal Freedom of Information Act (FOIA) request – which can be a costly and cumbersome process. Fortunately for the rest of us, other citizen journalists have filed such requests, and the cat is now out of the bag. Of the five independently-funded studies that looked at the effects of glyphosate, three determined that the herbicide did indeed pose a threat to the endocrine system – even at low levels of exposure.

On the other hand, not one of the 27 industry-funded studies came to any such conclusions (surprise!). One study did acknowledge some minor effects on lab rats. However, although most of those studies discovered serious hormonal disruption and increases in cancer among these test animals, company “biostitutes” invariably found excuses to ignore such findings.

What else should we expect when those scientists are bought and paid for by the very same industry that manufactures the substance they’re testing?

Unfortunately for Monsanto, there is a growing body of independent, published scientific evidence showing that glyphosate is a carcinogen, even at low doses. Nonetheless, Americans shouldn’t expect the EPA to acknowledge it. Nor should Europeans count on their own regulatory agencies to be forthcoming about the risks of the ubiquitous herbicide making its way into the food supply.

Because regulatory agencies such as the EPA and the European Food Safety Authority (EFSA) are increasingly beholden to the interests of predatory corporate “people” like Monsanto, natural humans are having to take matters into their own hands. One weapon they’re using in the face of “biostitution” is a form of “brandalism” – and it’s threatening to cause Monsanto some major headaches.

“Brandalism” has normally been defined as the invasion of commercial ads, logos and other forms of corporate branding into public places such as schools, parks, libraries and other non-commercial spaces.  However, activists in Scotland are now going after Monsanto with their own form of brandalism. “Eco-warriors” have come up with their own labels for Roundup®, which resemble the real thing – but contain graphic information about the product’s real health dangers. Liz Murray, a spokesperson for Global Justice Now, the organization behind the relabeling campaign, told the Glasgow Herald ,

There’s no question that glyphosate should be banned…the reason that the EU is considering re-licensing a chemical that has such potentially fatal consequences for human health is because of the enormous power that big corporations have in influencing such decisions.

Now, in the spirit of 13th-Century Scottish freedom fighter William Wallace, these “eco-warriors” are going into garden supply stores and home improvement centers across the UK, armed with the new labels, which they are applying to bottles of Roundup® as they sit on the shelves. These bright yellow labels are almost identical to Monsanto’s own labels. Unlike the original labels, however, these “knock-off” labels present the awful truth with warnings such as “The World Health Organisation classifies this product as probably causing cancer,” as well as “Degrades farmers’ power so corporations grow.”

When the public agencies charged with protecting natural people from the predations of ravenous “corporate people” are beholden to the latter, it’s time for the former to step up.