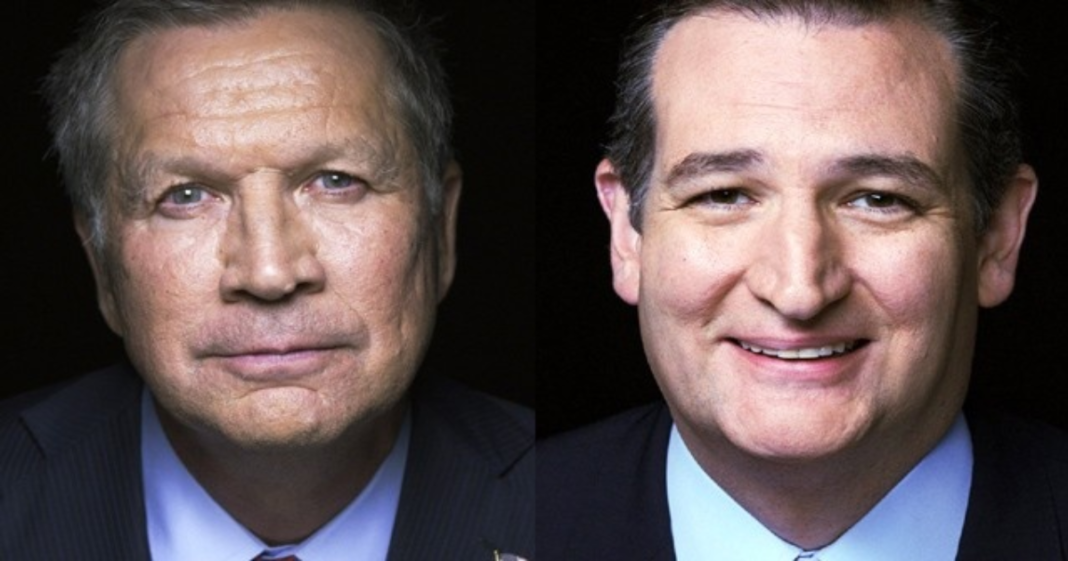 It is certainly not always easy to discern why politicians do what they do, but little is more confusing than the newly formed alliance between Republican candidates Ted Cruz and John Kasich who announced in a press release on Sunday that they would be teaming up to split the remaining states in order to prevent race leader Donald Trump from securing enough delegates to skip a GOP convention.

So many questions come to mind:

These candidates saw the writing on the wall about Trump months ago and they have again and again tried strategies to edge the real estate mogul out of first place to no avail. Marco Rubio tried this tactic with Kasich months ago when he was still in the running, encouraging voters to cast their ballot for Kasich in states that he had a stronger lead, but Kasich basically told Rubio to screw himself and said that he was going to fight for every vote. Now, Kasich is doing the same exact deal, but this time with a much less respectable partner.

Why do it publicly?

When two presidential candidates get together to conspire against another, its not usually the sort of thing they want to see on the front page of the New York Times, and yet the candidates chose to make this alliance public. Possible backfire includes voters feeling like they are being ignored, with this alliance helping to cement the idea that the system is rigged. Trump can now play the victim, giving evidence to the sort of anti-establishment talking points he has made for months. This also cements Cruz as a member of the establishment, despite his outsider Tea Party roots and almost universal loathing from Congress.

It really seems a whole lot like too little too late, but if the candidates do truly pull together against Trump will traditional Republicans see it as a welcome way out or an invasion of their Democratic duty? There are very few states left in the race and Trump is not too far from getting the holy 50 percent plus one, so this effort could certainly have been taken on a month or so ago and had a much better chance. It is in both candidate’s interest to take this to a convention, despite what Ted Cruz has said in the past.

Who’s going to get screwed?

Of course there is the possibility that one or both of these candidates are being played and that one will not do nearly as much as the other in the way of backing out of a losing state. In the hours following the announcement, the Kasich campaign canceled two Indiana campaign events which were scheduled for Tuesday, while Cruz said that he would “clear the way” for Kasich in Oregon and New Mexico. Of course, neither candidate can mathematically beat Trump at this point so really, what is there to lose?