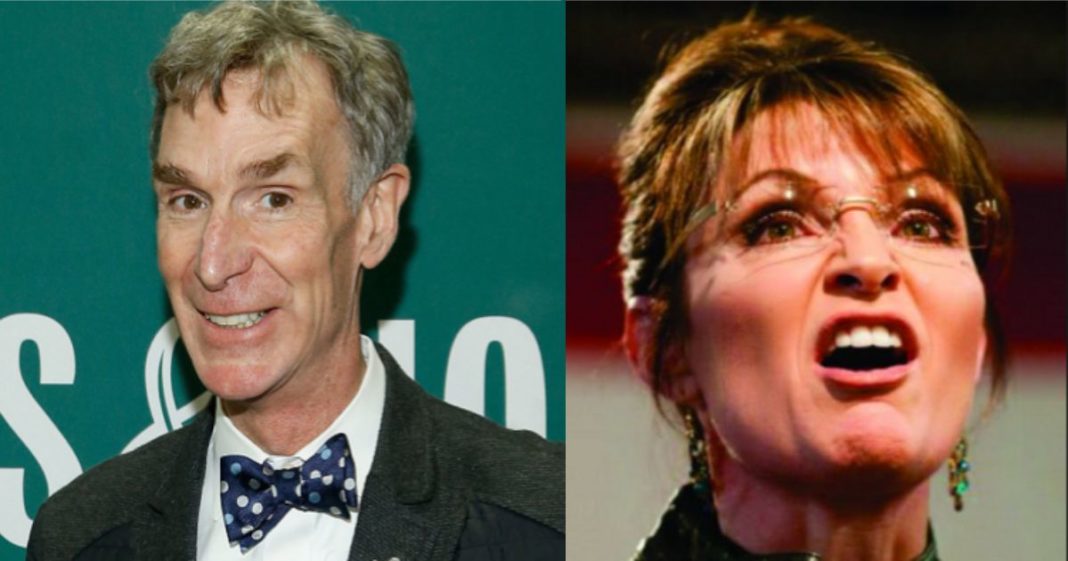 You could say that former Alaska Governor Sarah Palin is a lot of things: insane, chatty, nonsensical. But no one would call Palin “smart.”

And yet, this week Palin has forged a one-sided feud with Bill Nye, claiming that they would be holding a debate, then saying that Nye refused to attend (Nye was actually never invited), and now insulting the famous scientist by saying he is nothing more than a children’s show host.

All of this over their fundamental disagreement about climate change. Nye looks at irrefutable scientific proof while Palin looks at conspiracy theories and her bible.

For those of you unaware (and what a sad lack of knowledge this must be), Bill Nye is a beloved scientist who hosted the children’s science show, “Bill Nye The Science Guy.” For many adults who were children during this era, and even children today watching reruns, their fondest memories of learning about science and the world comes from Nye. All of this only makes Palin’s comments all the more egregious.

“Bill Nye is as much a scientist as I am. He’s a kids’ show actor, he’s not a scientist.”

In fact Nye has a bachelors of science from Cornell University where he studied mechanical engineering. He has also served in two roles of the Planetary Society, both vice-president and executive director. For Palin to suggest that Nye’s level of scientific knowledge is on par with hers is laughable. Most fifth graders who watched Nye’s show just a time or two are more of a scientist than Palin.